Every year thousands of people decide to tackle the challenge of visiting all four Walt Disney World Parks in one day.  But on one day every year, the largest number of people attempt to complete this challenge- and most of them do it on foot- Walt Disney World Marathon Day.

Every year thousands of people decide to tackle the challenge of visiting all four Walt Disney World Parks in one day.  But on one day every year, the largest number of people attempt to complete this challenge- and most of them do it on foot- Walt Disney World Marathon Day.

In 2018, 20,090 individuals completed the challenge of visiting all four parks in a single day.  For those unfamiliar with Walt Disney World runDisney races, most runners begin the day by boarding a bus long before sunrise in order to make it to the pre-race area long before the 5:30 AM start time.  Runners can fill the wait time taking pictures with various characters- including Mickey and friends.

Eventually, you will be ushered to the corrals and await your turn to start.  Waves within the corrals are set off in small bursts of approximately 1,000 runners complete with fireworks and inspirational music for each wave.  (Helpful runner tip- make sure to run a race to use to submit a Proof of Time that meets runDisney’s requirements to get a better corral placement and therefore a larger head start on the balloon ladies.)

The first park of the four parks in one day is the Magic Kingdom.  You don’t actually reach it until about 3 miles into the race. You will wind your way through the parking lot and have the opportunity to take pictures with several different characters before heading into the park and down Main Street.

And everything that you have ever heard about running down Main Street is true.  There is no feeling quite like it.  Spectators line the street with cow bells and signs all to cheer you on.  Within each of the lands, there are opportunities to stop for multiple character stops and special pictures, including this one in front of Cinderella’s Castle. 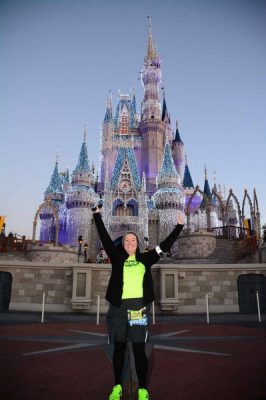 After leaving Magic Kingdom, you will wind your way through back stage area.  After putting in some ‘boring’ mileage with little to see or do, you will make your way into the second park of four parks in one day, Disney’s Animal Kingdom via a back entrance.  For many runners, this is the highlight of the race as they can ride Expedition Everest shortly after the halfway point of the race (that’s 13.1 miles for those of you keeping track).  Make sure to budget for a ride on this in your race training as it might be the only time you ride a roller coaster in the middle of a race.

Stay tuned for Part Two where we discuss your experience running through the other two parks at Walt Disney World.

What is your favorite part of running through either Magic Kingdom or Disney’s Animal Kingdom? Let us know in the comments or on Facebook.