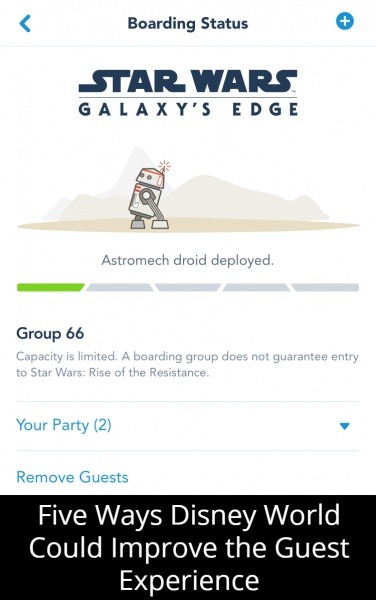 While Disney World is my favorite vacation destination, over the various trips I’ve made in the past year I’ve seen most things that Disney does better.  After my most recent trip, here are five ways that Disney could further improve the magic that is Disney World.

With the parks becoming non-smoking areas that means smokers should be lighting up outside the gates… which often means right next to the path that most park goers travel to and from the park. Figuring out a way so that non-smoking park goers don’t have to walk past the smoking section on their way into and out of the park would be a way that Disney could improve.  Doing so would create a better entrances to their park- especially at Magic Kingdom where the smoking section is located right along the path to the buses.

Figuring out how to convey transportation information to Guests correctly and quickly would be one way that Disney could improve.  The multiple transportation systems need to talk to each other.  Not like one morning where guests were told to use the Disney Skyliner which didn’t start operating for another 2 hours. Also, a method of notifying guests in EPCOT that the Disney Skyliner is down so that they don’t walk all the way to the International Gateway only to have to go back to the front of the park.

Rise of the Resistance Boarding Groups

When Disney expects you to book your FastPasses 60 days out and your dining 180 from your first trip but you have to go to Disney’s Hollywood Studios at park opening the morning of to get a boarding group for some unknown 2 hour window later in the day, Guests can be frustrated. One option could be similar to when Disneyland opened Galaxy’s Edge with a reservation system where if you stay a set number of nights (3 sounds like a good number), you have one guaranteed reservation. Or there are multiple day of time to get a boarding group- park open, 9am, noon, 3pm, 6pm, etc. where you don’t have to get up before the sun and cross your fingers that your boarding group doesn’t get called when it would interfere with those carefully constructed plans you made over two months ago.  That being said, the boarding groups are a great way to not wait in an all-day line- but a few improvements to the process could be helpful for everyone.

It seems like many families have one of these three- but getting them on and off buses isn’t easy. I would love to see Disney come up with a system that allows for some undercarriage storage for strollers during peak times and a faster loading of wheelchairs and scooters.  Anything that helps make the loading and unloading of Disney buses faster is helpful for everyone- along with undercarriage storage creating additional standing room on buses.

The biggest transportation problem of most trips are park open and park close.  On my most recent trip for instance, I went to Disney’s Hollywood Studios at park open with buses (which was the only Disney transportation option in operation) where as a solo traveler I got in line at 4:47AM where I waited on two buses before arriving at park at 5:29. Total travel time 42 minutes.  There were at least 3 more busloads of people behind me in line when I left. Comparing this to Disney’s Hollywood Studios at park close on the Skyliner where I got in line for Skyliner at 10:27PM, starting at my location at the bottom of the ramp of the Disney’s Hollywood Studios’ Disney Skyliner station and arrived back in my room at 10:52.  Total travel time 25 minutes.

Skyliner transportation is very efficient.  But it has to be operation in order for guests to be able to use it.  Also, when the Skyliner is a benefit touted on the hotel’s website, it needs to be available for guests for at least 60 minutes before park open to after park close.

What things do you think the Walt Disney World Resort could improve on? Let us know in the comments or on Facebook or Twitter!