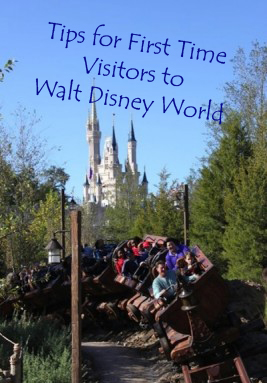 Are you a first time visitor to the Kingdom of the Mouse? No worries, you are not alone. A visit to Walt Disney World can be an overwhelming experience for anybody but first time visitors should not even think of undertaking a visit without proper planning.

The need for planning for First Time Visitors

While planning, make sure you read up about the rides at each of the four main parks; make a list of “must do.” Do the same for the restaurants. Once you determined which rides and dining experiences are important for you and all the members in your party make Fastpass+ reservations and Advanced Dining Reservations. While it seems a bit silly to plan these things out ahead of time, just doing these things can help to make your vacation go just a little smoother.

Another thing to keep in mind is that off property guest cannot take advantage of Disney’s Extra Magic Hours when the park opens to resort guests 1 hour earlier on certain days and stays open extra 2 hours longer.

One of the most important tips for a first time visitor is to get to the parks early and I mean very early!  Beat the crowds and get to the park of your choice, tickets in hand at least thirty minutes prior to the official opening time. Try to ride your favorite rides in the first hour of park opening saving the Fastpass+ reservations for later in the day when lines become long.  Eat breakfast in your room before you go to the parks, it will safe you money and precious touring time. Take a break around 2:00 p.m., return to the hotel, go for a swim, take a nap – or both. You will feel refreshed and ready for more touring later.

Enter the Magic Kingdom and take advantage of what Disney does best: fabulous parades (Festival of Fantasy Parade in the afternoon and the Main Street Electrical parade at night) and the top rides such as Pirates of the Caribbean, Peter Pan’s Flight, Space Mountain, Splash Mountain and all the new attractions of the new Fantasyland.

No longer do parents have to sprint to get their kids on Dumbo the Flying Elephant as the ride has been doubled in size and comes with a reservation system that allows parents and kids to have play time inside a circus tent till a beeper – just like in a restaurant – goes off telling them that it is time to fly with Dumbo.

The new Seven Dwarfs Mine Train is fun, Enchanted Tales with Belle and the Voyage of the Little Mermaid are much needed and welcomed new attractions in Fantasyland and the new interactive queue for the Peter Pan ride helps overcome what is still a very long wait if you have no FastPass+ reservation. The Be Our Guest restaurant in the Beast Castle is very popular and so are the character meals at Crystal Palace where Winnie the Pooh and friends are at hand to entertain little guests and their families.

At Epcot education is the focus. From Spaceship Earth to Mission: Space and Test Track there is no time to waste. Another must ride is Soarin’, ride first thing in the morning or use Fastpass+.

Around World Showcase you can enjoy the cultures of countries such as Mexico, France, China, Germany and Norway. Watch the diverse street entertainment offered daily. At the Moroccan Pavilion make Spice Road Table your headquarters for the evening show IllumiNations:  Reflections of Earth.  Ask for a table overlooking the lagoon, order some fabulous tapas and relax with a nice glass of wine.

The Animal Kingdom is the most unique of all four parks and home to the Festival of the Lion King stage show; Kali River Rapids, a whitewater raft ride; and Expedition Everest, a roller coaster featuring the infamous Yeti. Another absolute must is the animal-filled Kilimanjaro Safaris.

Currently there is no parade or nighttime entertainment at the Animal Kingdom, however, Disney recently though announced that there will eventually be evening entertainment including a nighttime version of Kilimanjaro Safaris, “Rivers of Light” , an evening spectacular and more. Unfortunately no premiere date has been announced. (Rumors indicate sometime in Spring 2016.) The same goes for the opening of the AVATAR land coming to Disney’s Animal Kingdom. (Rumors indicate sometime in 2017.)

Disney’s Hollywood Studios draws its theme from film and television and while it offers some behind-the-scenes tours, most attractions are plain good fun. Three huge thrills, while not for the faint at heart, are the sci-fi ride Twilight Zone Tower of Terror, the Rock ’n’ Roller Coaster Starring Aerosmith and the flight-simulating Star Tours.

Do you have a Frozen fan in the family? Except for the Animal Kingdom, all three parks offer some Frozen related fun. Yes, no article can be complete without that important data!

At the Magic Kingdom guests can meet Anna and Elsa at Princess Fairytale Hall and see the sisters, albeit from afar, during the Festival of Fantasy Parade.

Currently Anna and Elsa are not holding court at Epcot.  The Norway pavilion however, has a very small exhibit on what inspired filmmakers during the making of the movie. It can be seen as part of the Norsk Kultur exhibition inside the replica of the Stave Church. For more Frozen fun at Epcot guest will need to exercise some patience as Disney is building a ride based off the popular movie in what once was the home of the Maelstrom ride. (Expected to open sometime in 2016.)

At Disney Hollywood Studios join Anna and Elsa in For the First Time in Forever: A Frozen Sing-Along Celebration. There is also Frozen merchandise and Frozen-inspired food and drinks galore in all the parks.

Live entertainment at all four parks is Disney at it’s best.  First time visitors are often so busy to get to the rides that they do not even know how much there is out there for them to enjoy with little or no waiting in line at all.
Make sure to get a schedule (a.k.a the Times Guide) of any and all performances when entering the parks. At the Magic Kingdom the new Festival of Fantasy Parade is a must, at Epcot don’t go home without seeing the final act of the day “IllumiNations: Refelctions of Earth” and at Disney Hollywood Studios Fantasmic will be the highlight of your day.  Finally, at the Animal Kingdom don’t miss Finding Nemo – The Musical.

These shows are headliners but you can also encounter live entertainment at all parks throughout the entire day. Look for the Main Street Philharmonic and the Dapper Dans at the Magic Kingdom; the hilariously funny Citizens of Hollywood at Disney Hollywood Studios; Burudika, the vibrant African band at the Animal Kingdom and the Mariachi Cobre band performing traditional folk music of Jalisco at the Mexican Pavilion. And did I mention the fireworks?

While it is most important to get to the parks early and to prepare prior, your first time visit can be absolutely enjoyable. There is so much to do and to see that even if you do not get to ride every ride or see every show, chances are that you will have a magical time anyway.
What is your best tip for those who are touring Walt Disney World for the first time? (Or the first time in forever…you knew there had to be a Frozen reference coming.)