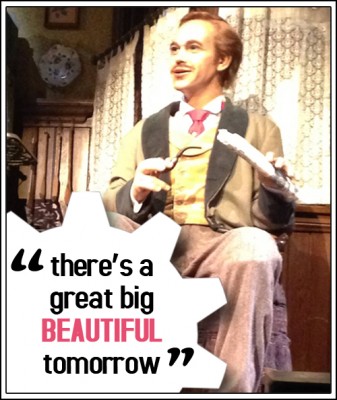 “There’s a great big beautiful tomorrow, shining at the end of every day!” I must admit that I tear up a little every time I hear this song now. On our last family vacation to Walt Disney World in February 2016, we visited the Walt Disney’s Carousel of Progress for the very first time. As a huge fan of Walt Disney, it was about time that I checked out one of the only attractions at Walt Disney World that was imagined by Walt Disney himself! As I watched the black and white video clip shown in the waiting area outside the Carousel of Progress doors (featuring Walt and the Sherman brothers singing the theme song) I must admit that I was feeling quite nostalgic and emotional!

The Carousel of Progress was designed as an exhibit for the 1964 World’s Fair in New York, and was created to showcase the life of one family in the 20th century and how the various advances in technology improved their day to day life. The attraction made its home in Disneyland from 1967 – 1973 and was moved to its current home in Walt Disney World in 1975 where it remains in Tomorrowland at the Magic Kingdom today. The Carousel of Progress has had more performances in the history of stage shows than any other show and is said to be Walt’s favourite attraction – one that he said must never close! The very catchy and memorable theme song “There’s a Great Big Beautiful Tomorrow” was written by the Sherman brothers and is guaranteed to be firmly stuck in your head for the remainder of your day at Magic Kingdom…if not for your entire vacation and beyond!

The attraction is situated in a rotating, seated theatre and follows the life of one Audio-Animatronic family as they experience the technological changes in their day to day lives, from before electricity to the present day. The entire show is depicted in four scenes with the theatre rotating in between each scene and the theme song “There’s a Great Big Beautiful Tomorrow” playing between each transition. After a short introduction, the audience is introduced to the family – Father, Mother, Daughter, Son, Grandpa, Grandma and Cousin Orville.  Oh… and their dog Rover!  FUN FACT: Rover is the same dog that you see in the Pirates of the Caribbean! 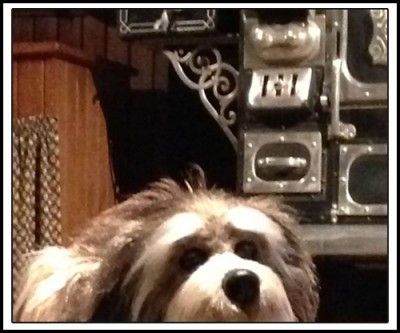 In Scene 1 the story begins with Valentine’s Day, right around the turn of the century and the father describes life with the modern amenities of the time… like iceboxes and gas lamps!

Scene 2 takes place as the family is preparing for Fourth of July festivities in the 1920’s. In this section the father describes such modern advances as electric lights, vacuums, and their new refrigerator. There are a few humorous moments as the new electric amenities are blowing out the fuses all over the neighborhood!

Scene 3 describes the “Rat Race” of the 1940’s and the latest innovation in the family’s life – indoor plumbing!

The final scene has the family celebrating Christmas just before the start of the new century. In this scene, the family is enjoying the modern luxuries of a voice controlled oven and virtual reality video games!

Although this may not be the most thrilling attraction, or one that you will want to race to at rope drop – I think it has its merits. It’s a very enjoyable way to spend 20 minutes, seated out of the blazing Florida sun, and there is rarely much of a wait on those days when the wait times for other attractions are incredibly long! So if you have always passed this one by, give it a try on your next vacation. And if you have seen it before…stop by again…it’s like visiting an old friend! “There’s a great big beautiful tomorrow, just a dream away!” 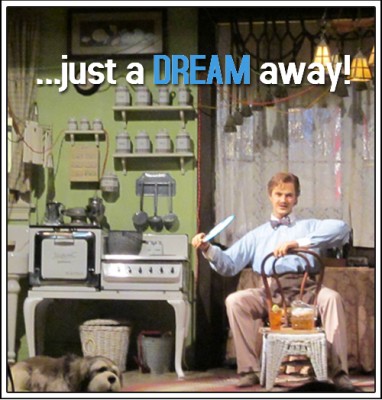 What is your favorite scene from Carousel of Progress? Share why in the comments!

I have loved everything Disney since childhood, but really caught the Disney bug the first time I visited Disneyland with my family in 2000. Since then I have been to Disneyland, Disney World and on the Disney Dream several times and even spent a day visiting Disneyland Paris! I love to decorate my home with little Disney touches (Mickey Mouse anything is my favorite!) This helps to keep the magic alive in between trips to my home away from home!