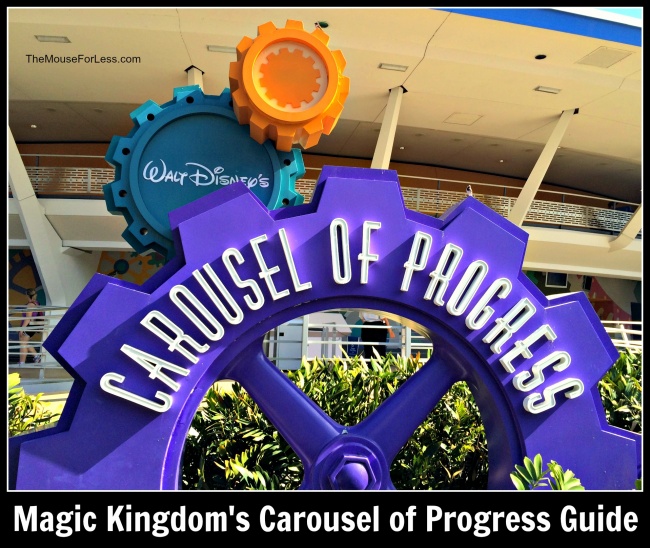 Enjoy a progressive trip through the 20th century and beyond on Walt Disney’s Carousel of Progress.

Age Recommendation: All ages, though better for adults

Ride Photo Available For Purchase:  No

Shopping: A plethora of necessaries and Disney souvenirs can be purchased nearby at “Mickey’s Star Traders” and “Merchant of Venus.”

Dining/Refreshment: Several restaurants are located near the Carousel of Progress. In Tomorrowland, guests can enjoy a counter service lunch or dinner at Cosmic Ray’s Starlight Café, The Lunching Pad, and Tomorrowland Terrace. Cosmic Ray’s features an eclectic menu of burgers, hot dogs, chicken, and ribs; The Lunching Pad specializes in fancy pretzels and hot dogs; and Tomorrowland Terrace seasonally serves burgers, hot dogs, and sandwiches. Guests who rather enjoy a table service meal can choose among a wide variety of sandwiches and ice cream at Plaza Restaurant, located on Main Street USA near the Tomorrowland border.

Restroom: Facilities are situated between Carousel of Progress and Space Mountain.

A Hidden Mickey is included as cloth on a mirror in the opening scene of Carousel of Progress as the daughter is getting ready to go out for a Valentine’s Day dance. Additionally, a Sorcerer Mickey hat appears adjacent to the daughter in the third act as she exercises.
Sponsored Ad: Learn more about Hidden Mickey details and location throughout Walt Disney World in A Field Guide to Walt Disney World’s Best Kept Secrets