Now through April 7th, Universal Studios Orlando celebrates Mardi Gras, and the fun starts prior to the parade at the French Quarter Courtyard. 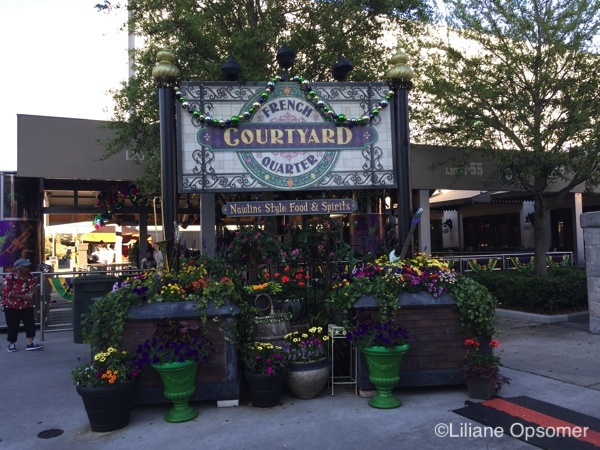 New Orleans bands and mouthwatering Cajun-style bites— such as jambalaya, shrimp po’boys, gumbo, and beignets—tempt visitors as of 4:00 p.m. each day. 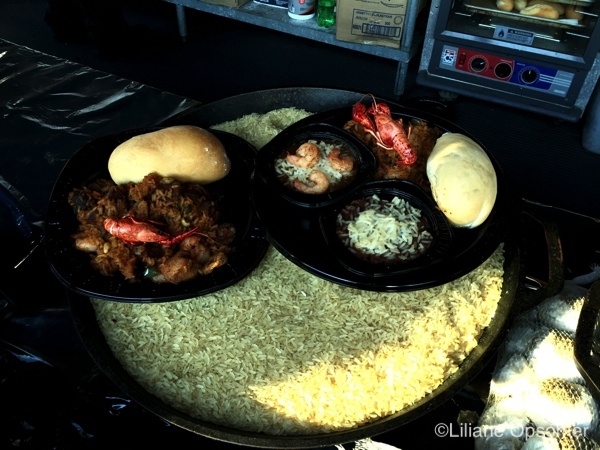 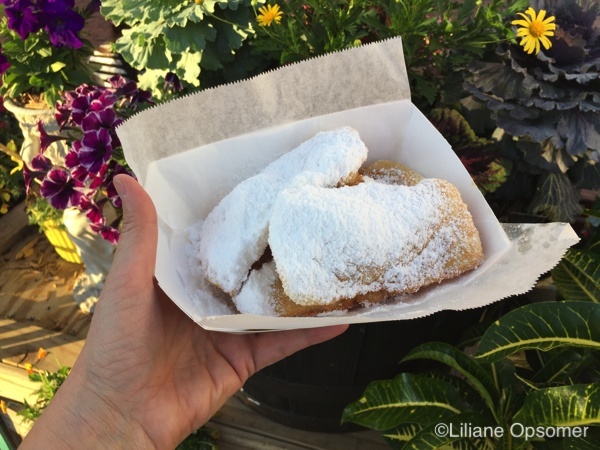 Before the parade starts, in the early evening, members of the festival Krewes come out to play games, dance, and take photos with guests. 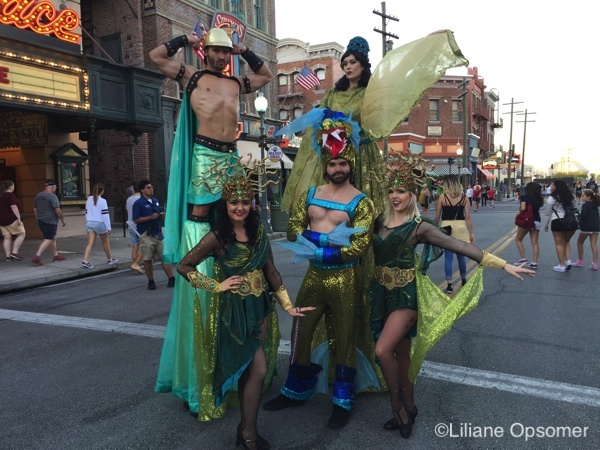 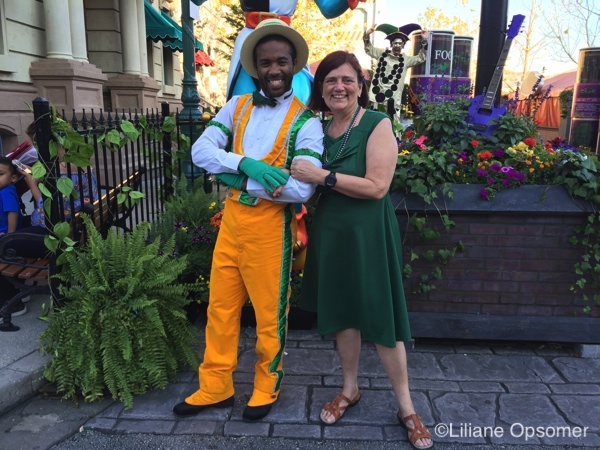 Every night, each float parts with 6,000 beads, which amounts to 4 million beads over the 50 Mardi Gras nights! And that does not take into account 12,000 doubloons and the 2,050 pounds of confetti showered onto guests along the parade route. 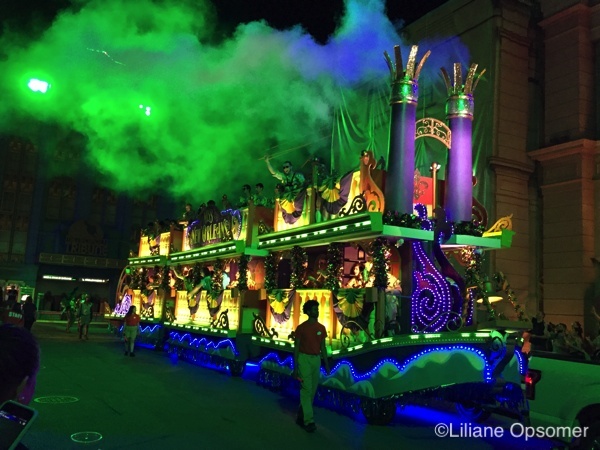 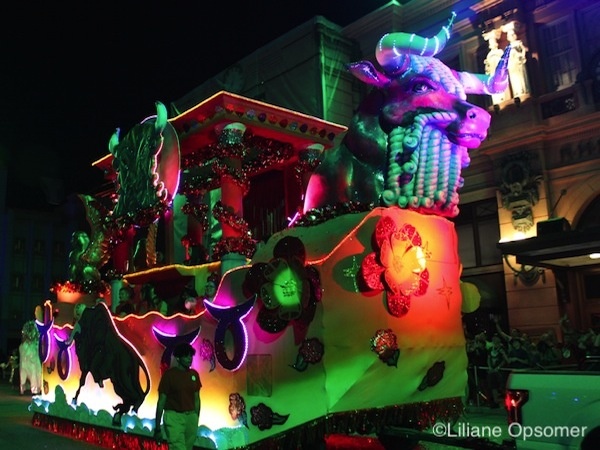 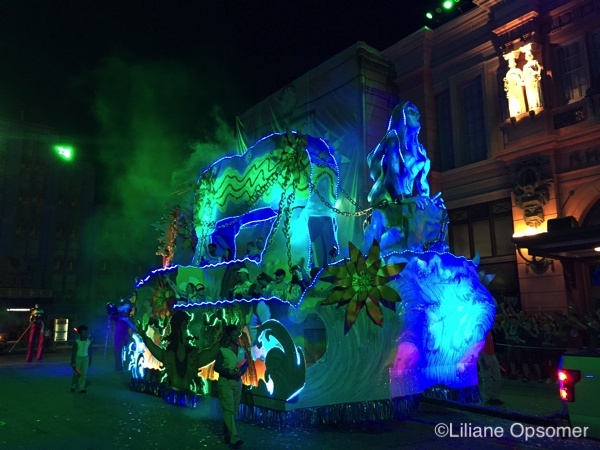 Did you know that the floats are made by Kern Studios, the same company that creates Mardi Gras floats for New Orleans? Kern Studios was officially founded in its current form in 1947, but the Mardi Gras Krewe of Alla invited Blaine and Roy Kern in 1932 to design and build the floats for his Krewe. Today, Kern Studios builds floats every year for 18 different Krewes—and Universal Studios Orlando! 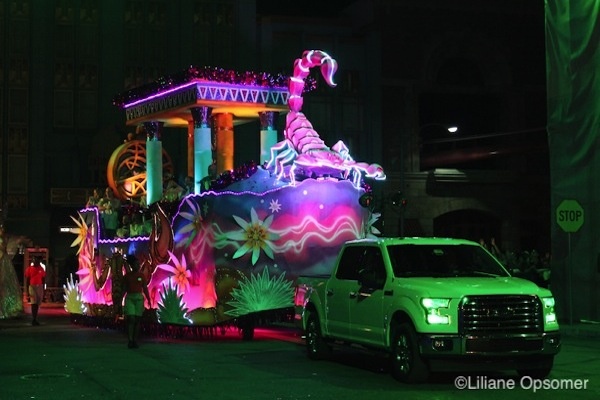 Where to View the Parade

For the remainder of the Mardi Gras festivities, the parade starts nightly at 7:45 p.m., rain or shine, and lasts for about 20 minutes. The parade begins right next to the Horror Make-Up Show and heads straight to the New York section of the park. Passing Revenge of the Mummy, the parade turns left towards Universal Music Plaza, then left once more, into the Hollywood section of the park, to end where it started. 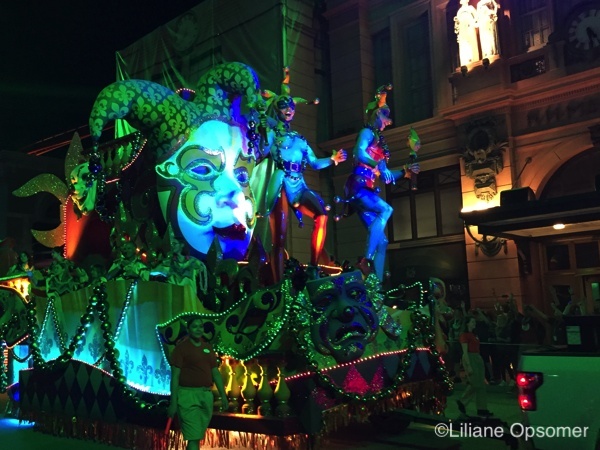 My personal favorite spot for parade viewing is in the New York section of the park. A spot near Finnegan’s Bar & Grill or Louie’s Italian Restaurant is great for taking pictures. If you are willing to arrive early, you can even grab a chair from Louie’s and sit until the parade starts. Doing so, however, will stop you from enjoying the fun going on at the French Quarter Courtyard. 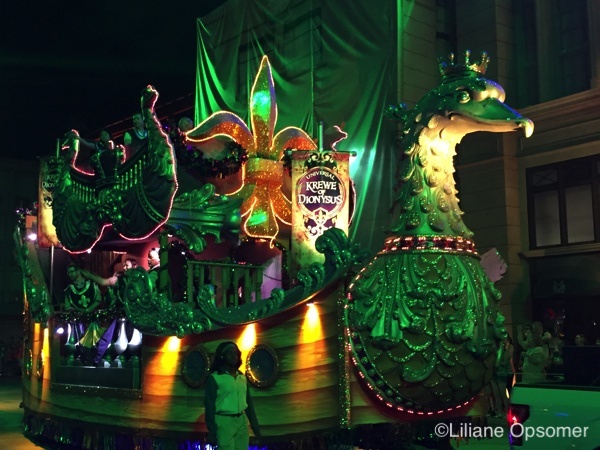 The Little Jester’s parade viewing area is located next to the now-closed Terminator 2:3D attraction and is reserved for families with kids. This section is perfect for parents who wish to exit the park quickly once the parade is over. The Annual Passholder viewing area is in front of Mel’s Drive-In. This section is great for viewing, but it’s not so good if you wish to take pictures of the floats. 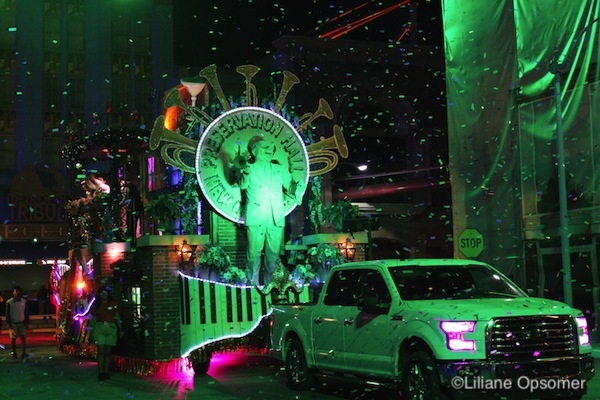 However, Mel’s Drive-In and the Horror Make-Up Show Theater are perfect for viewing the parade twice because the parade starts and ends there. The viewing area for guests with disabilities is located in front of the Macy’s facade in the New York section of the park, right next to the Revenge of the Mummy attraction. 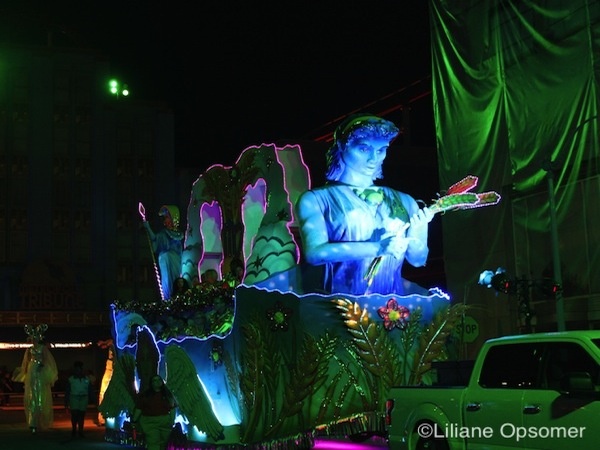 Best of all, Mardi Gras festivities are included with admission to Universal Studios Florida, so wear your best purple and gold, and join the fun and excitement of the Big Easy, Florida style! 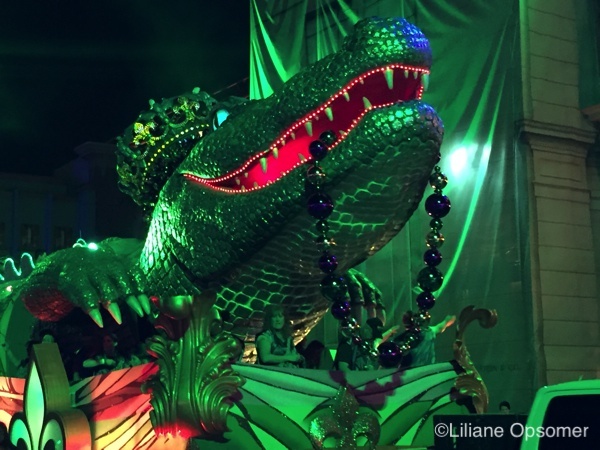 On select nights, catch live performances from some of New Orleans’ most talented brass bands, bringing the sounds of the Bayou to the French Quarter Courtyard, while bands such as Fitz and the Tantrums and Fifth Harmony take the stage at Universal Music Plaza. The plaza is open to the general audience (standing only) with a small reserved viewing area for guests with disabilities. If you want to get close to the stage, I recommend you claim your spot hours before the concert starts, especially for the more popular musical acts. Some fans arrive as early as 10:00 a.m. to be in line to dash to that front row spot as soon as the plaza is opened to the public. All concerts start at 8:30 p.m.

Have you caught the Mardi Gras festivities at Universal Studios Florida? Share your thoughts in the comments.