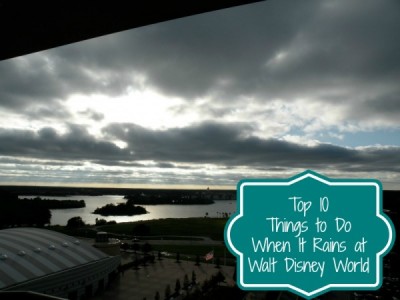 Walt Disney World is a WONDERFUL place to visit, but we all know that it is not the cheapest of vacations.  When it begins to rain, some people head for their hotel and call it a day.  When we go, we don’t want to give up any of our vacation time with the magic.  I’m sure that many of you have the same feelings about this, so I would like to share some of my family’s favorite things to do in the rain at Walt Disney World.  Put on your raincoat or Walt Disney World poncho, and let’s enjoy the day in the rain!

1.  Many of the rides have queues and the actual attraction itself that are protected from the rain, so just because it’s raining, it doesn’t mean that you have to stop riding rides.  The first ones that come to my mind are Under the Sea ~ Journey of the Little Mermaid in Magic Kingdom and Toy Story Mania in Disney’s Hollywood Studios.  When thinking about Epcot, the first one I think of is Soarin’ in The Land, which brings me to #2. 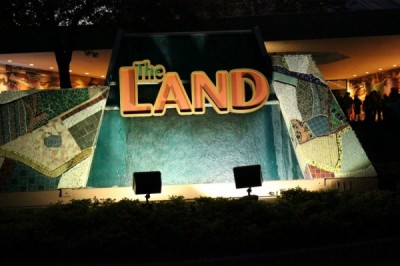 2.  If we’re hungry, we try to head to a good place to eat, and The Land fits that bill on many levels because of the variety of food at Sunshine Season but also because of the attractions there under one roof:  The Circle of Life, Living with the Land, and Soarin’.  Of course, there are many places to eat, so make sure to insert your favorite place to eat into this #2 slot.

3.  Find a show indoors.  Some of the options are Muppet Vision 3D in Disney’s Hollywood Studios, Mickey’s Philharmagic in Magic Kingdom, Captain EO in Epcot, and Finding Nemo – The Musical in Disney’s Animal Kingdom. 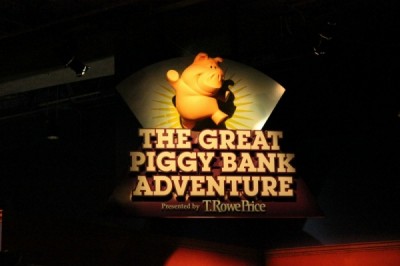 4.  My family loves the variety of things to do at Innoventions East and West from The Great Piggy Bank Adventure to the Sum of All Thrills.  It’s a great way to stay out of the rain.

5.  The Sea’s with Nemo and Friends is another attraction with an indoor queue, but it also leads to SeaBase.  We love to spend time there looking at the fish, sharks, and Manatees.

6.  On our last trip, we finally visited Walt Disney: One Man’s Dream in Disney’s Hollywood Studios.  There is a lot of Disney history in this small museum-type display and is a great place to spend a rain shower for many Disney fans.

7.  While we’re here in Disney’s Hollywood Studios, I should mention The Magic of Disney Animation.  Besides being able to see a short film about how Disney animated characters are made, there are also character meet and greets here in this building.  The lines can be long, but they are out of the rain.

8.  One of the things we like to do even when it is not raining is to resort-hop.  We may stay at Port Orleans, but it is fun to go see what some of the other resorts look like.  If we are in Magic Kingdom, it is easy to grab the resort monorail and visit the Contemporary Resort, the Grand Floridian Resort and Spa, and the Polynesian Resort.  {The resort monorail is currently experiencing planned maintenance that may interrupt some service during the day through the end of March 2014.}

9.  We love to shop!  Whether it is actual buying or just “window-shopping”, shopping at Walt Disney World is the best!  Sometimes, we go between the raindrops from store-to-store in the parks, and sometimes, we combine it with #8.  One of our favorite resorts to shop in is Disney’s Contemporary Resort.

10.  We do keep an eye on the radar, and if it looks like the weather is going to be stormy most of the day, we do look for alternatives that will keep us out of the rain for a good chunk of the day.  We usually carry some device (computer or iPad) with movies on it that can be used to watch Disney movies in our room for a break.  Another option would be DisneyQuest in Downtown Disney.

The most important thing is to have a great time!  Even a rainy day at Disney is better than a day at home, so make the most of your trip if you are able!

I know I have missed some great options, so please leave your favorite things to do in the rain at Walt Disney World in the comments!