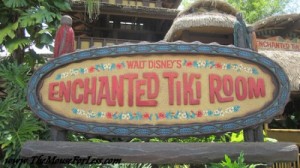 A long time before Twitter made tweeting a common occurrence, the inhabitants of the Tiki Room have been “tweeting” their way into the hearts of guests each year.

The original Tiki Room opened on June 23, 1963 at Disneyland Park. The signing birds, flowers, tiki drummers, and totem poles were the first audio-animatronics used in an attraction. Or any attraction for that matter, as WED Enterprises patented the technology. For the last 50 years, this beloved attraction has been entertaining guests. So much so that when Walt Disney World opened in 1971, the same Tiki Room opened there to entertain guests at the new Disney park.

While the Tiki Room at Disneyland has had its share of upgrades over the years, it is quite similar to the attraction of 1963. Upon entering the  pre-show area, there are benches to sit on, and a lovely stand selling Dole Whip floats right there. Nothing puts guests more in a tropical frame of mind like a pineapple treat and some beautiful scenery in the lanai. 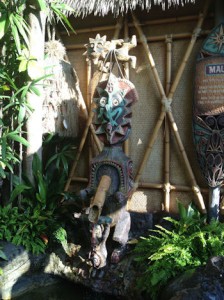 Tiki god Maui in the lanai outside of the Disneyland attraction.

The Tiki Room at Walt Disney World is not the same as Disneyland. The preshow is a series of queues where guests wait to enter the room. There is a pre-show, but it consists of one character who says a few things before the show.

Now, the Walt Disney World version has had its share of controversy. In 1998, the Tiki Room came under “New Management” in the form of Iago from Aladdin and Zazu from The Lion King. While there may have been some freshness to the changes (yes, I was OK with it at first), most guests missed the nostalgic attraction. As if by some divine intervention, there was a fire in the Tiki Room and Iago was destroyed. As a result, in 2011, the original Tiki Room was restored, although in a slightly edited format. 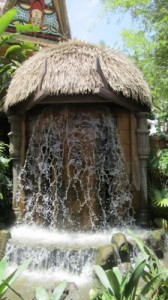 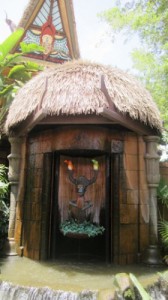 The Walt Disney World pre-show area before and during the show.

Having been to both recently, I think the edge goes to Disneyland on this attraction. Although many of the songs are the same, there is just something fitting about the nostalgia of the Tiki Room at this park. And the pre-show is so much more inviting.

I’ve been there in the evening when crowds were thinning and the masses were seeking out a spot for Fantasmic! (Remember, this is Disneyland Park, so that evening show is held on the Rivers of America.) Just sitting in the pre-show area, reading about the Hawaiian gods, and sipping on something cool to drink brings a sense of transformation. You feel that you are in Polynesia, rather than a queue to a ride. When the show is about to start, and the gods come to life, it gets everyone ready to see what is inside. 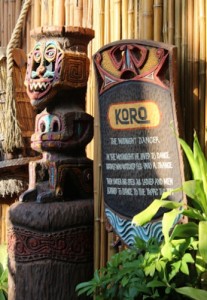 Koro, the Midnight Dancer, outside of the Disneyland attraction.

Disney shared a video of Rolly Crump, one of the Imagineers who created the Tiki Room, reminiscing about the creation and Walt Disney’s influence in it.

So although I still will go visit Jose, Michael, Pierre, and Fritz at the east coast version, for a true Disney experience it’s worth a visit to the west coast original Tiki Room.

So, with that, all together

All the birds sing words, and the flowers croon, 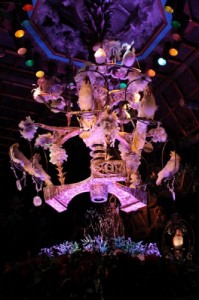