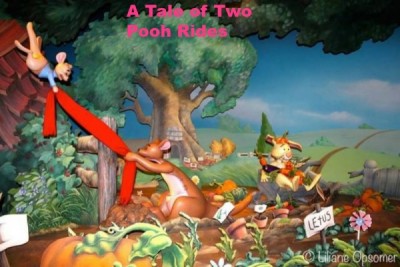 Let’s take a ride into the Hundred Acre Wood!

It’s no secret that I adore both Disneyland and Walt Disney World. One of the things I love about these places is that even attractions that have exactly the same name have subtle differences depending on which coast it’s on. For example, there’s The Many Adventures of Winnie the Pooh. You’ll find this ride at both Disneyland and Walt Disney World, and the casual visitor might not notice many differences. But take a closer look and you’ll find that these two versions of the same ride offer subtle differences.

Let’s start with the most obvious difference: where the ride is located. On both coasts, you’ll find the ride in the “castle” park: Disneyland Park and the Magic Kingdom.

However, the land in which the ride resides is different. In Disneyland Park, you’ll find it in Critter Country, which doesn’t even exist on the East Coast. Pooh Bear took over the spot formerly occupied by The Country Bear Jamboree (which is still happily running at Walt Disney World). As a reminder of the attraction it replaced, there is a hidden reference to the Bears: those who look carefully will find the busts of Max, Buff and Melvin still on display.

In the Magic Kingdom, you’ll find the Winnie the Pooh ride in Fantasyland, in a spot formerly occupied by Mr. Toad’s Wild Ride (which is still happily running at Disneyland Park). As a reminder of the attraction it replaces, there is a hidden reference to Mr. Toad: those who look carefully will find a picture of Mr. Toad handing a deed over to Owl. 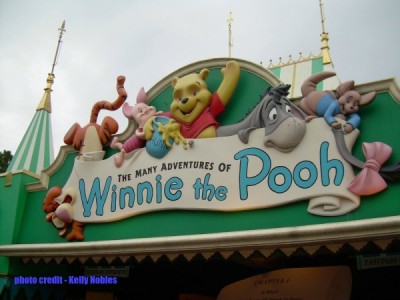 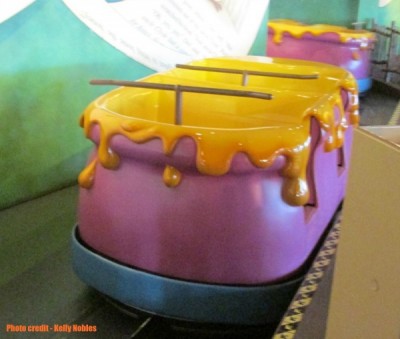 In Disneyland, you will find a relatively short wait to ride Pooh during most of the year. Instrumental music from the Pooh films and the buzzing of bees fill the air. The line moves quickly, and there is no FastPass option here. Even during weekends and the busy Spring Break and Summer seasons, I have never waited for more than 15 minutes to ride.

In Walt Disney World, it’s a completely different story. Lines for Pooh can be notoriously long. This ride is FastPass+ accessible and parents of young children are encouraged to the system to reduce your wait time. If you choose not to, however, you will be delighted to see what lies in store for youngsters who have to wait. The queue here is interactive, and my then 8 year old daughter actually requested that we NOT book a FastPass for this ride so that she could enjoy it. Kids will be able to play music on over-sized vegetables, push bees along a track, crawl through a tunnel, paint with “honey” on an interactive screen, visit Piglet’s house, and crawl through Eeyore’s house, all well within earshot and sight of their parents, who are giggling watching the antics while waiting on line for the ride. For some kids, the line might be just as much fun as the ride! 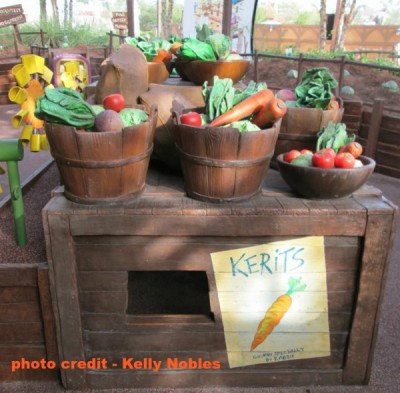 Whether you ride it on the West Coast or the East Coast (or like me, do both as often as you can!) you will find a fun, family friendly, mild ride that will delight youngsters and the young at heart.

Which version of Winnie the Pooh is your favorite and why? Share in the comments section!