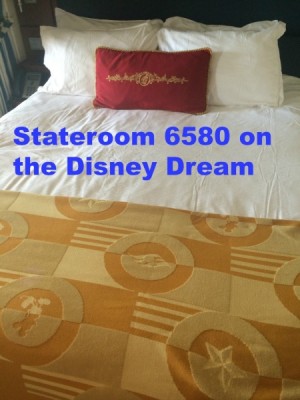 Queen sized bed in our stateroom

On our first Disney Cruise aboard the Disney Dream, we opted for a Deluxe Oceanview Stateroom with Verandah. We wound up with Stateroom #6580. This was our family’s first cruise, and we had been warned by several people that cruise ship staterooms are much smaller than hotel rooms. However, we were also reminded that Disney staterooms are the largest in the industry.

When we first opened our metal stateroom door, I understood what everyone was talking about. It WAS small, but I was impressed by the amount of storage space. We had two good sized closets with a shoe rack, as well as drawers in a dresser and a desk. The queen sized bed had plenty of room for our luggage underneath, and a small coffee table opened up for storing our day bag.

On the right hand side, there was the split bathroom. The section closest to the door had the toilet and sink. Next to it is the shower compartment. Waiting for us were toiletries themed to Mickey, Minnie and the gang.  Next comes the sleeping area with the queen sized bed. 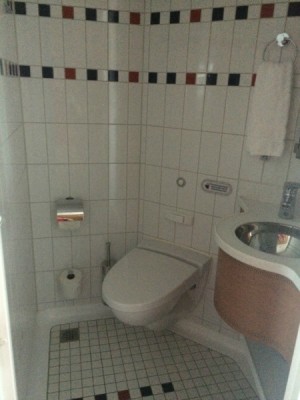 A curtain separates the sleeping area from the sitting area, on the Disney Dream, which includes a TV which can pivot on a stand so that when the curtain is drawn, it can be maneuvered to be on either side of the curtain. There is also a desk and a small coffee table here, as well as a convertible sofa. 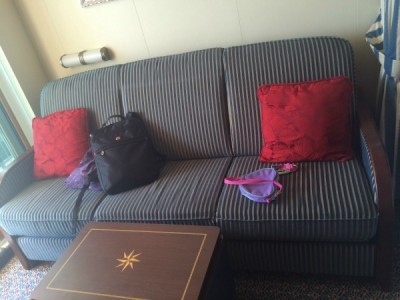 A second bed can be pulled down from the ceiling. Our stateroom attendant asked which bed our daughter would like to sleep in, and she picked the sofa bed. It was turned down for us every evening, and every day it was put back into sofa position, which meant we had more space during the day.

Past the sitting area is the verandah, which is small but has enough room for two chairs and a small table. Each verandah is separated from the one next to it with a partition. Don’t let the illusion of privacy fool you, though. At one point my husband and I were talking about how quickly we were using up our internet plan when a voice from the verandah next to us joined in the conversation! 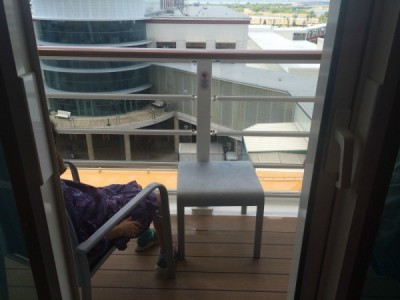 our verandah, with a view of Port Canaveral

If your traveling party opts for connecting or adjoining staterooms, these partitions on the Disney Dream can be taken down so that your entire party can enjoy the verandah together. I can definitely see the appeal.

The décor is nautical and decidedly Disney. Lampshades are decorated with maps that show the routes of all four Disney cruise ships. Castles mark the locations of all the Disney theme parks worldwide. 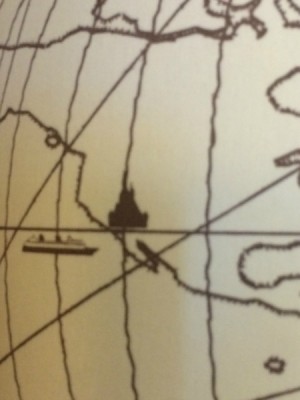 I found Disneyland on the lampshade!

The pillow on the queen sized bed reads “A Dream is a Wish Your Heart Makes” which is also the tune the foghorn played when we left port. Each night, when we returned from the evening show, we found a playful towel animal on the bed. It often wore my sunglasses!  We also found chocolates on our pillow, except on Pirate Night, where chocolate doubloons took their place. 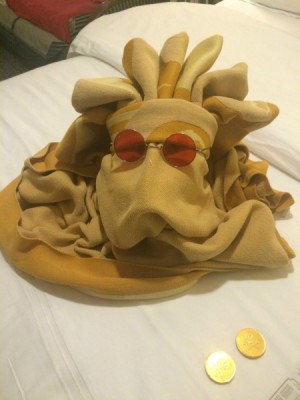 We didn’t spend much time in the stateroom, which is probably the norm for a cruise. We did have trouble getting used to the small space when we first got into the room. While unpacking, my husband stood near the closet and I handed him clothing; there wasn’t enough room for both of us to unpack simultaneously.

And later, I was getting dressed by the closet when my husband came out of the shower compartment, knocking me in the small of my back with the door handle! However, we got accustomed to the space fairly quickly. The beds were comfortable, the shower pressure was good, and the temperature of the stateroom was just right. 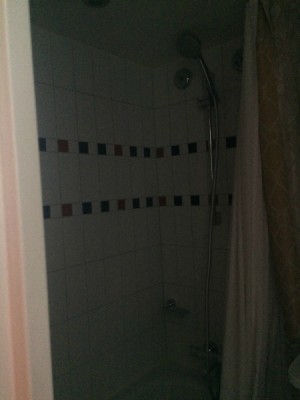 My favorite part of the Disney Dream stateroom was the verandah. We enjoyed coming back to our stateroom in between our afternoon activities and our dinner seating, sitting on the verandah and listening to the sounds of the ocean.

Have you stayed in a Verandah on Disney Cruise Line? Share your thoughts in the comments.