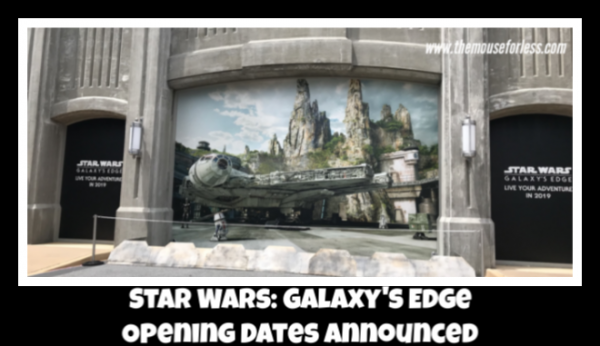 Both lands will open earlier than expected, and in the case of the Walt Disney World version, a lot earlier than expected. The land is expected to open on May 31 at the Disneyland Resort and on August 29 at Disney’s Hollywood Studios. The reason behind the earlier openings (I mean the Walt Disney World version was originally expected to open in late fall of 2019) that due to the tremendous demand that is expected upon the land. However, to help with the swell of crowds, Disney made the decision to open the land in phases to allow guests to enjoy the one-of-a-kind experiences earlier.

Phase two, which will open later this year, will feature the Star Wars: Rise of the Resistance attraction.

Over at the Disneyland Resort, Guests planning to visit Star Wars: Galaxy’s Edge between May 31 and June 23 will need valid theme park admission and will be required to make a no-cost reservation, that will be subject to availability, to access the land. Information on how to make a reservation will be shared at a later date. Guests staying at one of the three Disneyland Resort hotels during these dates will receive a designated reservation to access Star Wars: Galaxy’s Edge during their stay (one reservation per registered guest) and valid theme park admission is required.

Moving over to the east coast, a reservation will not be offered to experience Star Wars: Galaxy’s Edge at Walt Disney World, at least at this time. Capacity, for the land, of course, is limited. Additionally, Star Wars: Galaxy’s Edge will be available during Extra Magic Hours. (It will not be available for Extra magic Hour or Magic Mornings at Disneyland.

There will not be a separate ticket for Guests wishing to enter Star Wars: Galaxy’s Edge. Instead, regular theme park admission will suffice.

Also interesting to note is that at Disneyland, the Disney FASTPASS service, including access via Disney MaxPass,  and at Walt Disney World, FastPass+ will not initially be offered at Millennium Falcon: Smugglers Run.

If you would like to learn more about what to expect when visiting Star Wars: Galaxy’s Edge, make sure to check out our handy guide.

So, no matter whether you’ll be visiting the Walt Disney World or the Disneyland version of the land, know you’ll need to pack your patience and get ready for the mayhem when Star Wars: Galaxy’s Edge officially debuts later this year.