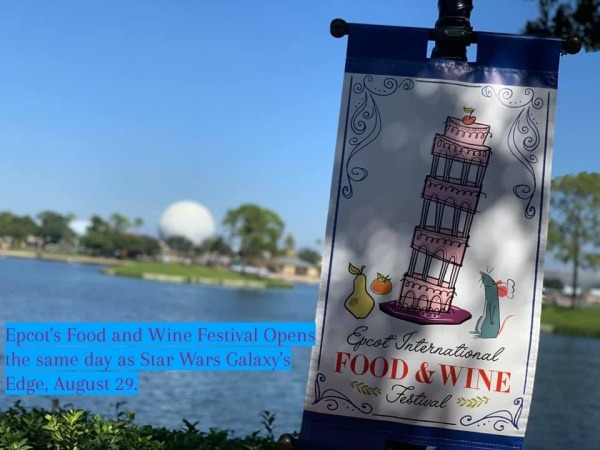 For those who who don’t know yet, Star Wars: Galaxy’s Edge is opening at Walt Disney World’s Disney’s Hollywood Studios on August 29. It’s hard to say that with a straight face.

Disney released the land’s opening date well before its expected debut in late fall. Galaxy’s Edge is part of a $2 million dollar investment Disney is putting into its parks. Due to high guest interest, the new, immersive land is coming to Orlando this summer.

Not everyone is a Star Wars fanatic, nor are they a fan of waiting on long lines. There are some other things to look out for come August 29. While everyone is going on a smuggler’s run during the new Millennium Falcon ride, take advantage of some other options.

The 2019 International Food and Wine Festival

The 24th year of 2019 Epcot Food and Wine Festival opens on no other than, you guessed it, August 29.

The longest Food and Wine Festival in the park’s history is scheduled to run from August 29 to November 23.

It features tasty food kiosks, seminars with celebrity chefs, fine dining events and free concerts at the American Gardens Theatre. The Eat to the Beat Concert Series returns and will run from opening day to November 9. The concert series features its largest lineup yet with 35 scheduled acts.

Instead of heading into a new galaxy, eat and drink around the world.

Disney Springs is receiving a brand new addition in the form of the NBA Experience on August 12. It will be less than three weeks old when Galaxy’s Edge opens up, offering opportunities outside of the theme parks.

The NBA Experience gives fans the chance to feel like the pros. Guests cane take part in a combine, slam-dunk challenge and getting a look in the film room and locker room. The new 44,000 square foot, two-floor facility will give guests the chance to make an entrance like a pro. Fans can walk out of a player’s tunnel and into a replica of a modern-day NBA arena. It will be a ticketed experience. Tickets are $34 plus tax for 10-year-olds and up and $29 plus tax for children ages three to nine.

The NBA Experience could be the perfect escape from Galaxy’s edge, far, far away.

What better time to experience the things you’ve never have than when the gates of Galaxy’s Edge finally opens up. With the highest anticipated crowds to date, this could be the perfect time to ride some E-ticket attractions that typically have longer waits. Even if stepping foot into Disney’s Hollywood Studios seems too adventurous, there are three other parks with plenty to do.

If you’re dreading the opening of the new land, these three options may be right for you on August 29.

What tips do you have for avoiding Star Wars: Galaxy’s Edge crowds when the land officially opens at Disney’s Hollywood Studios? Let us know your thoughts in the comments or on Facebook or Twitter!

A sports writer for over three years, I have knack for all things Walt Disney. When I am in the parks, you can find me any snack kiosk, quick service restaurant or sit down. I like food. When I'm not in the parks, I'm thinking about all three.