As the 12 floats make their way through Universal Studios, bringing a family-friendly version of the New Orleans celebrations to Florida, guests excitedly collect beads, which are distributed generously. 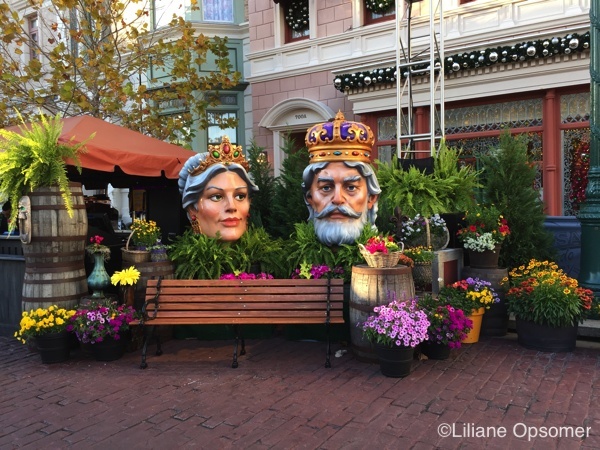 This year, 6 out of the 12 floats are new. The new floats, all based on mythological creatures, are Manticore’s Majesty, The Rise of the Garuda, The Dance of the Dragon, Phoenix from the Flames, Garden Sprites, and The Flight of the Pegasus. The floats are designed by Kern Studios, the Louisiana-based designer of many floats in New Orleans. 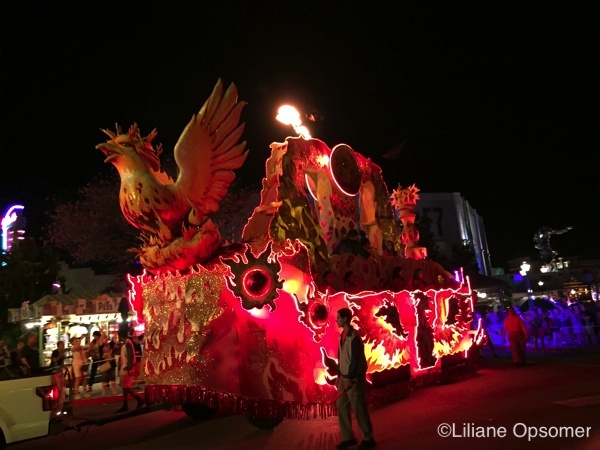 My favorite float is the Gator King float, which marks the end of the parade. He is huge, and he is absolutely beautiful. 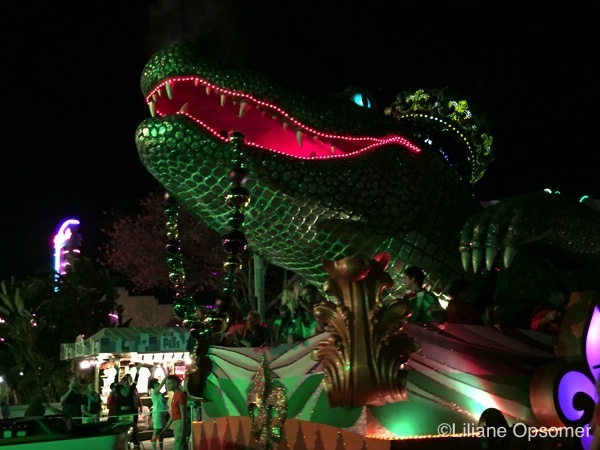 Mardi Gras at Universal Studios starts prior to the parade at the French Quarter Courtyard, where guests can enjoy authentic New Orleans bands and amazing food, such as jambalaya, gumbo, and beignets. 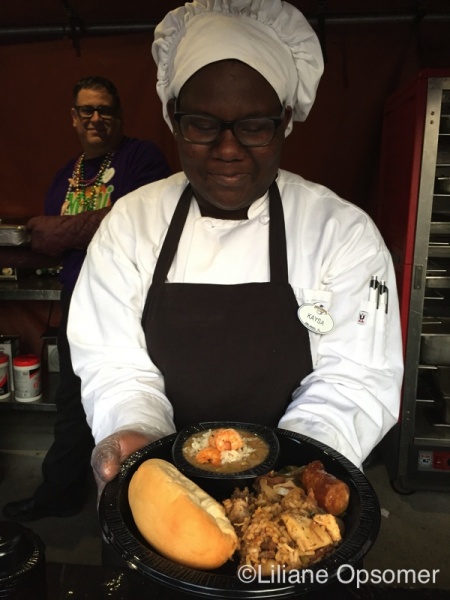 On select nights you can also enjoy free Mardi Gras concerts. When I visited, Olivia Newton John was the star of the night.

Prior to the parade, performers from each float mingle with guests at the French Quarter Courtyard. 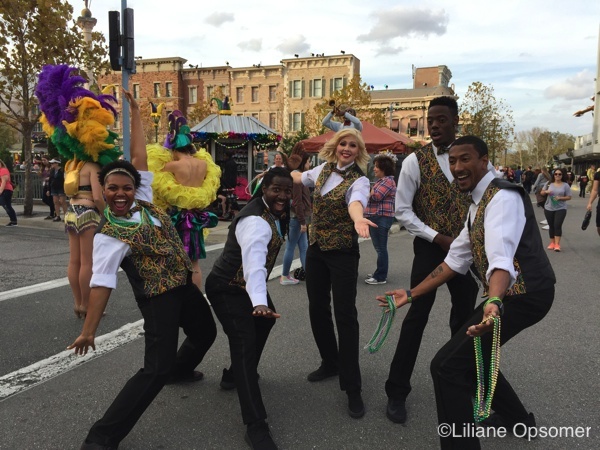 Don’t be shy—join the fun, and get your picture taken with these amazing characters. 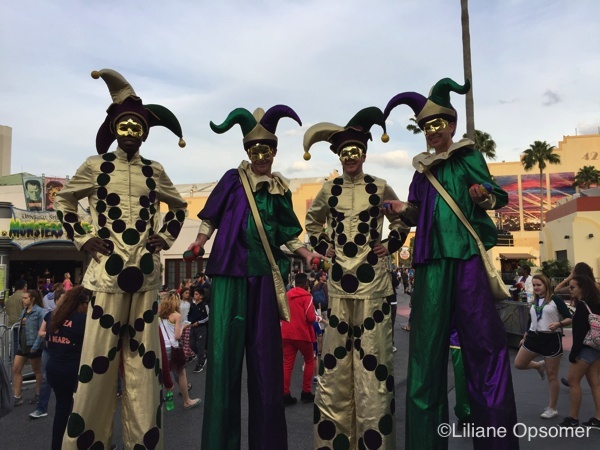 The Little Jester’s parade viewing area is located next to the Terminator 2:3D attraction and is reserved for families with kids. This section allows parents to exit the park speedily once the parade is over. The Annual Passholder viewing area is in front of Mel’s Drive-In.

Mel’s Drive-In and the Horror Make-Up Show Theater are perfect locations for viewing the parade twice because the parade starts and ends there. 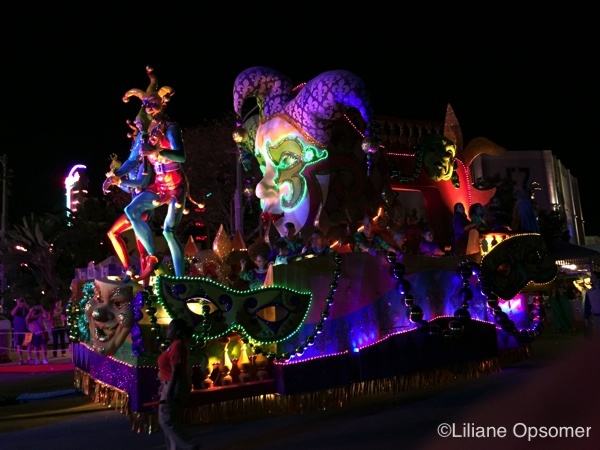 Another great spot is Finnegan’s Bar & Grill or Louie’s Italian Restaurant in the New York section of the park. The viewing area for guests with disabilities is located in the middle of the Music Plaza Stage.

You Can Join the Krewe!

This year, a friend and I were given the opportunity to be float riders with the Jester Float Krewe. We were fitted with matching Krewe costumes, and we had a fabulous time aboard the float, throwing beads at the eagerly waiting guests.

Did you know that 4 million beads are thrown during the 50 Mardi Gras nights? This is a whooping 6,000 beads per float every night! In addition to the beads, 12,000 doubloons are distributed and 2,050 pounds of confetti are showered onto guests throughout the festival. 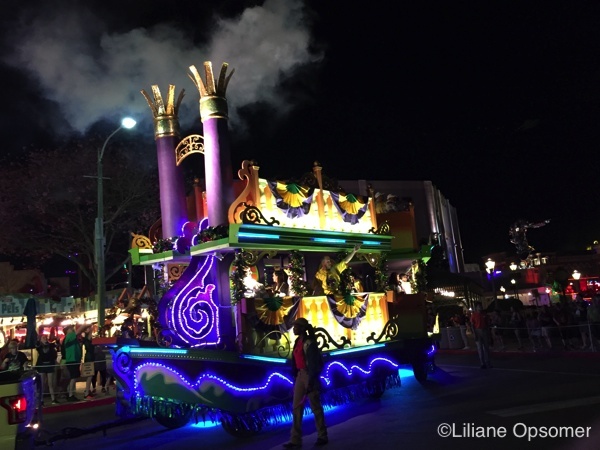 If you want to join the fun, keep in mind that you will have to check in at least half an hour prior to the parade and that it will take time to get back out into the park once the parade is over. Being both a Krewe member and catching the Mardi Gras concert is impossible on the same night. Last but not least, if you want a good spot for the concert, you’ll need to skip the parade altogether.

I loved every minute of my time with the Krewe and would certainly do it again. However, participating in the parade is not for first-time visitors. If you’ve never seen the Mardi Gras parade, I recommend you enjoy the colorful spectacle along the parade route. 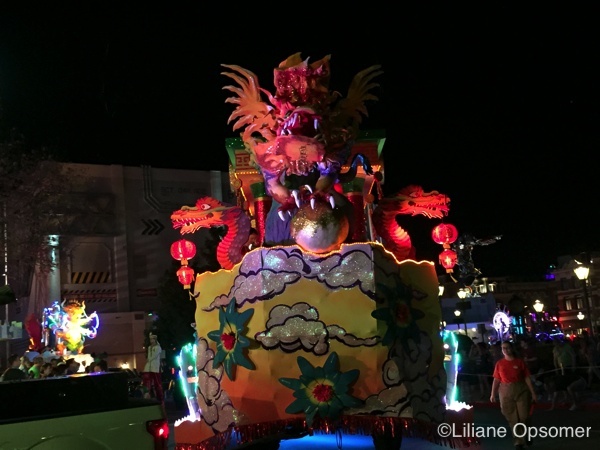 How to Participate with a Mardi Gras Krewe

If you are an Annual Passholder, you can sign up here for a chance to participate. (You can sign up for yourself and up to five guests.)

A limited number of Universal Orlando on-site hotel guests can also participate in the Mardi Gras parade. Contact your resort concierge for details.

Each night, two hours prior to parade time, you can go to the standby line outside A Day In the Park with Barney in the KidZone. If spots are available on the floats, you will be allowed to ride. Your chances to join the fun are higher Monday through Thursday versus the weekend.

Have you ever experienced Mardi Gras at Universal Orlando? What were your thoughts? Share in the comments!