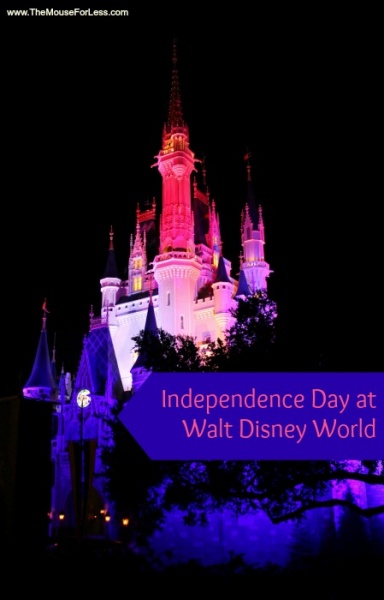 Last year my family decided that we needed to see Walt Disney World on July 4th. Independence Day is one time when we hadn’t experienced the parks, and the idea was quite intriguing.

One thing to bear in mind, though, is that Independence Day, like most other holidays, means that Walt Disney World will be crowded. Add to that the summer heat, and it’s a lot to take in. Armed with this knowledge, we decided that there was one goal for the day – see the fireworks. Nope, we weren’t going to hang out at our local smaller fireworks display. We were going to see fireworks at Magic Kingdom.

For our Independence Day trip, we chose Magic Kingdom. We found our spot and stayed put. It wasn’t in the hub, but that was alright with us. We had no need to be that close. There were plenty of people who joined us on the bridge where we stood. We had our own version of a picnic (we ate dinner early) in the form of Mickey bars, popcorn, and beverages.

As you might imagine, our celebration of Independence Day at Magic Kingdom did not disappoint. The fireworks were spectacular. The patriotic tie-in was amazing. We were there with quite the crowd, to be sure, but the feeling of seeing the red, white, and blue castle was worth the crowds. We had a day to remember.

If you are going to be at Walt Disney World this year, take a look at our Independence Day page for more information and lots of event details.