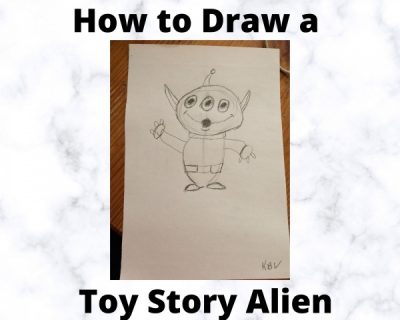 I’ve always loved the Animation Academy at both Walt Disney World (I miss it!) and Disneyland (in California Adventure), so when I heard that Pixar was releasing videos about how to draw their famous characters, I thought it would be fun to try!

Keep in mind, my husband and my daughter are the visual artists in the family. I keep everything we have ever done at the Animation Academy, and my attempts are not great. My Mickey Mouse looks like he’s had one too many. My Grumpy looks like it’s a mug shot. My Winnie the Pooh looks more like Brian from Family Guy. 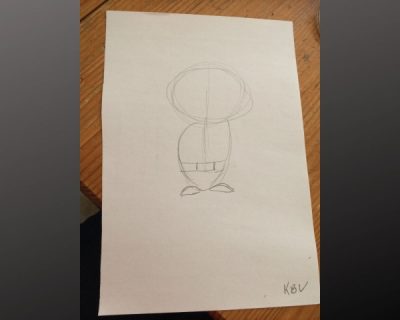 The alien begins to take shape

But, in the name of mother-daughter bonding time and Disney fun, I decided to give this video a try! Pixar released a tutorial on how to draw an alien from Toy Story.  In this tutorial, animator Benjamin Su shows us step-by-step how to create this character. Here is the video:

The first thing my daughter and I noticed is that this moves much quicker than Animation Academy. The entire lesson is only 6 minutes long, and there’s no pausing for banter. But, of course, we were able to pause the video whenever we wanted to, in order to catch up with Benjamin’s instructions. 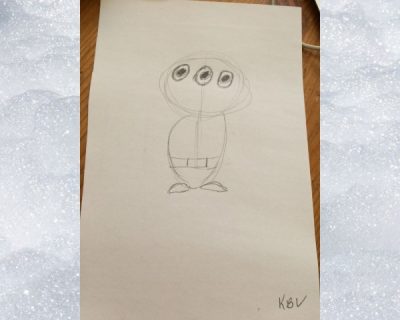 It wouldn’t be a Toy Story alien without the three eyes!

At the end of the video, Benjamin encouraged anyone who was drawing along to share a photo of their Toy Story alien on social media with the hashtag #DrawWithPixar. This isn’t quite the same as holding up your finished product in the Animation Academy, but it has a chance to be seen by a wider audience, so I think that’s cool!

I asked my daughter how she liked doing this little art activity. She says that she enjoyed and will be keeping her drawing in her art folder. She does wish that there was more humor and joking in the video, the way they do at Animation Academy. 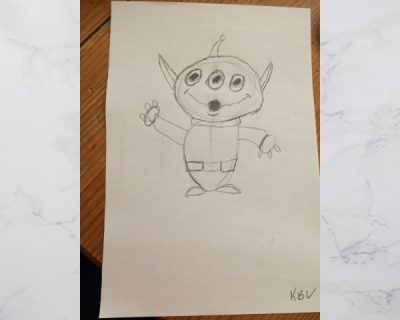 I’m not happy with his hands

As for me, my final alien didn’t turn out too badly! I feel like some of the proportions were off, and that his head should have been bigger, and his feet, also. But all in all, this is a keeper.

My daughter didn’t want me to take photos of her work in progress, but she gave me the green light to share her finished product. 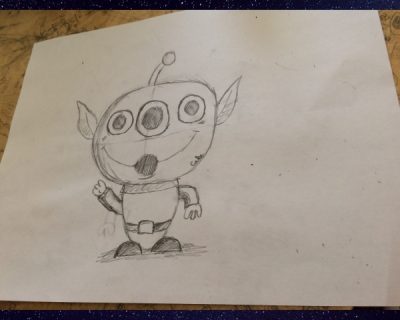 Once the video ended, YouTube queued up How to Draw Woody, another drawing tutorial from Pixar in the series. My daughter and I are both looking forward to trying that one!