Although many visitors to Star Wars: Galaxy’s Edge may be unfamiliar with the planet of Batuu and its Black Spire Outpost, Star Wars fans will discover that the land is filled with hidden gems drawn from the Star Wars movies and the many novels, comic books, and television series.

The story of the planet of Batuu is set during the current trilogy of the Star Wars films, between The Last Jedi and The Rise of Skywalker, and cinematic references abound throughout the land. Let’s have a look at some of them! 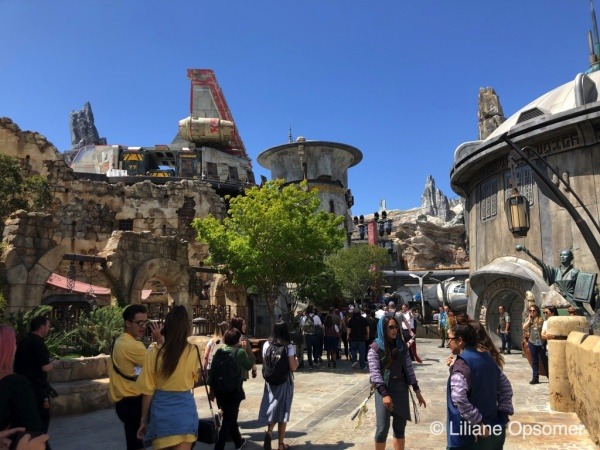 The Millennium Falcon is known to all as it makes a first appearance in Star Wars: Episode IV–A New Hope, the first film in the Star Wars trilogy in 1977. The ship that Han Solo won from Lando Calrissian in a sabbac game has made many appearances since. It is important to know that, after Han Solo’s death, the ship becomes somewhat the headquarters of the remaining members of the New Republic, formerly known as the Resistance. Princess Leia, now Commander Organa, gives instructions to her top spy, Vi Moradi, to set up a base for the New Republic; that base, you guessed it, is Batuu. 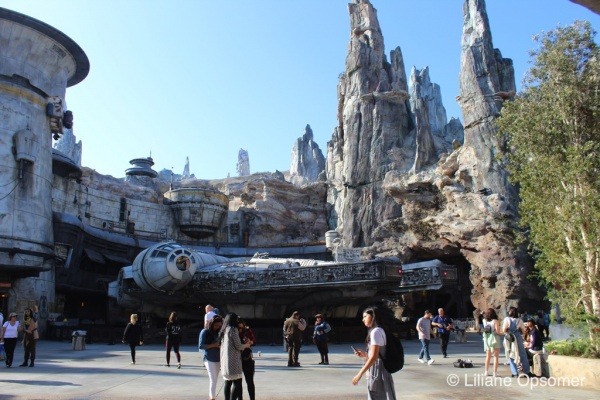 Before boarding Millennium Falcon: Smuggler’s Run, Guests receive their instructions for the upcoming mission from Hondo Ohnaka. The Weequay pirate is best known from the Star Wars: The Clone Wars and the Star Wars Rebels animated series. Hondo is, however, older when seen on Batuu. Imagineers consulted with the character’s creator, Dave Filoni, to properly portray the pirate’s personality when creating the audio-animatronic figure for the attraction. 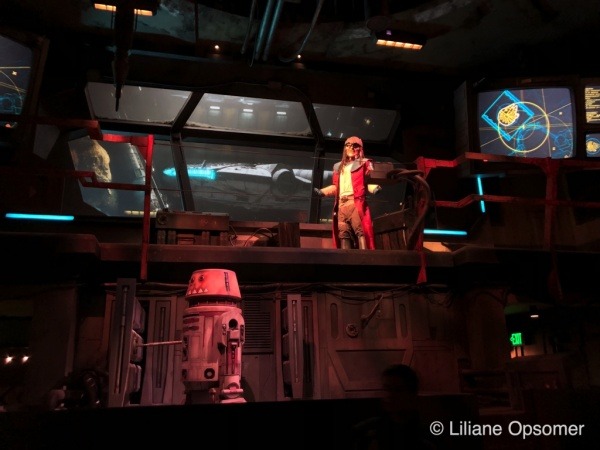 The Characters on Batuu

While you will not see Darth Vader, Han Solo, or Princess Leia on Batuu, you will see stormtroopers, Kylo Ren (yes, he is still around to create mayhem), Rey, BB-8, and Chewbacca, to name a few. Last but not least, all Cast Members effectively represent the villagers of Black Spire Outpost, both through their outfits and their interactions with off-world visitors. 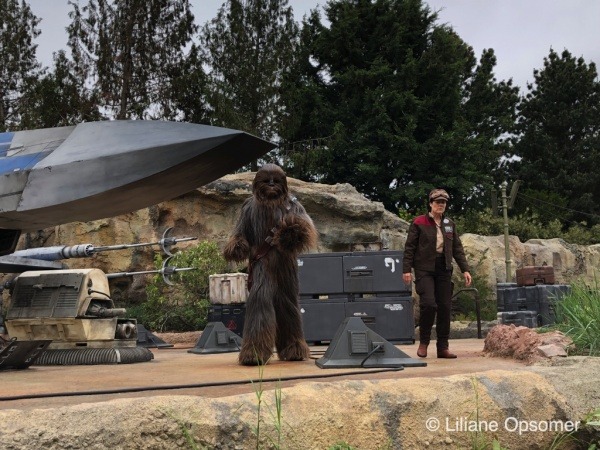 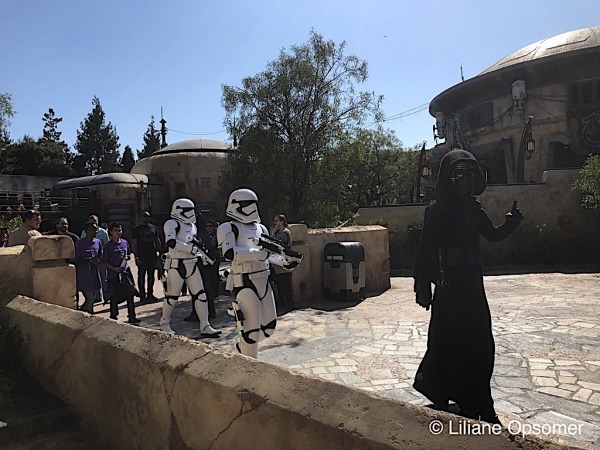 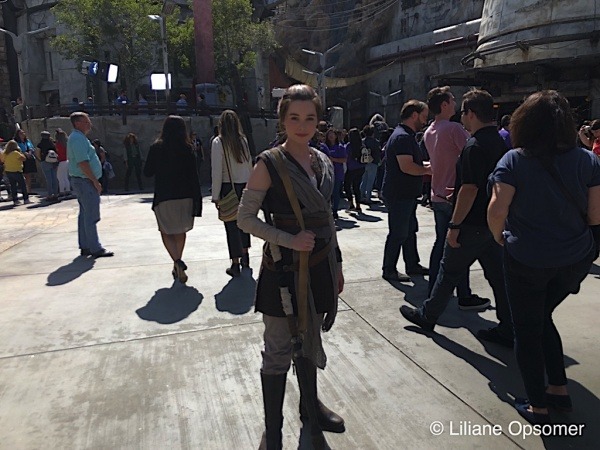 Black Spire Outpost and Dok-Ondar, the owner of Dok-Ondar’s Den of Antiquities, are both referenced in Solo: A Star Wars Story. 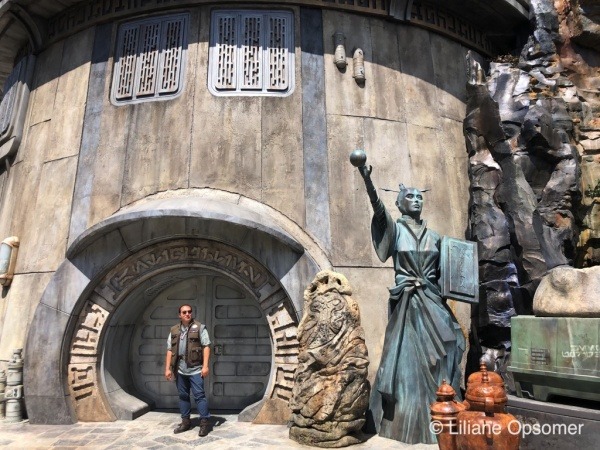 Dok-Ondar, the life-size animatronic male Ithorian, is obsessed with antiques and his store is filled with all kinds of curious items that he will sell, if the price is right. 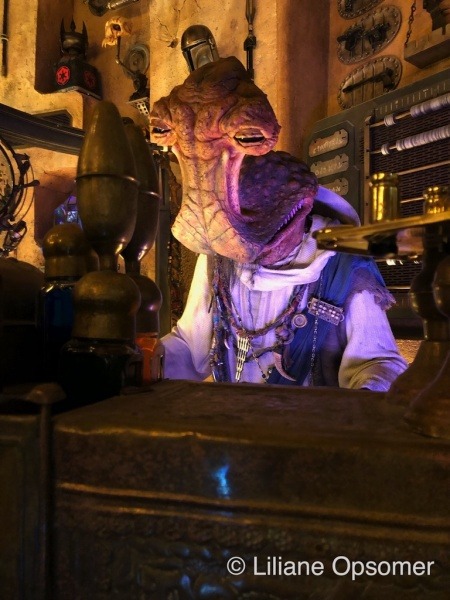 Among treasures and goods of all kinds, Dok has a full-size taxidermic Wampa, as seen on the ice planet Hoth in Star Wars: The Empire Strikes Back. 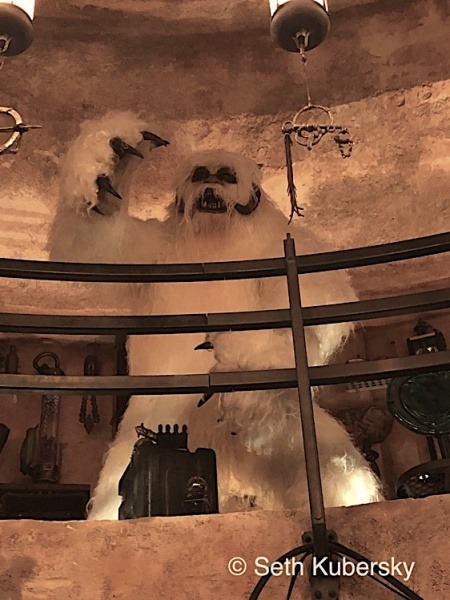 Another curiosity is the baby Sarlacc that Han Solo and Chewbacca smuggled for Dok-Ondar. Look for the small animatronic sitting in a glass aquarium. A larger version of this carnivorous creature lives on the desert planet Tatooine and made its appearance in Return of the Jedi, when Jabba the Hutt tried to feed Luke Skywalker, Han Solo, and Chewbacca to the alien beast. 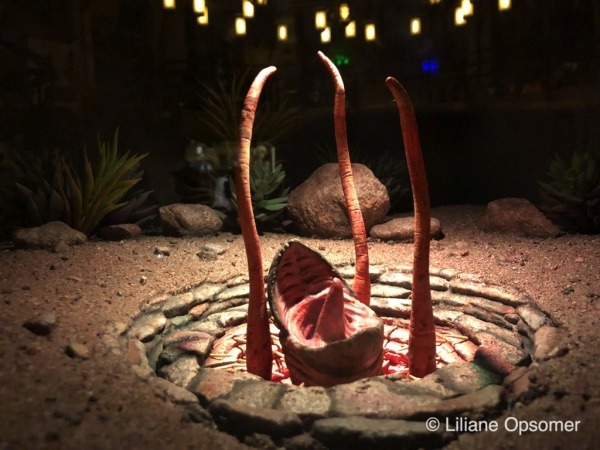 When entering Dok-Ondar’s store, look for the mural depicting an ancient battle between the light and dark sides of the Force. Keen observers will remember that this is a replica of the bas-relief in Chancellor Palpatine’s office, as seen in Star Wars: Revenge of the Sith. 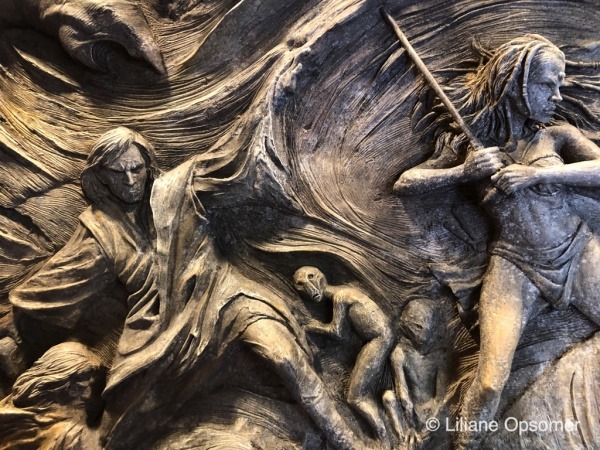 The shop is a treasure trove of artifacts, but there is also plenty of merchandise from which Dok-Ondar will part against your off-world credits.

There are figurines, robes and accessories for aspiring Jedis, and some amazing jewelry, such as Princess Leia’s necklace. To re-create the famed Princess’s necklace, Disney reached out to the European designer who still had the mold used to make the necklace four decades ago.

Replicas of lightsabers belonging to famous Star Wars Jedis are also on sale. I was smitten by the mysterious, memory-transmitting Holocrons. I bought mine with a red kyber crystal, so that tells you what side I am on! 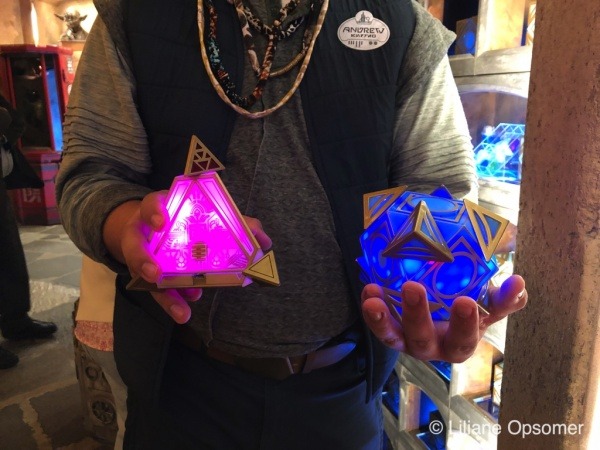 Oga’s Cantina: A Hangout for Pilots, Smugglers, and Bounty Hunters

Timothy Zahn, in his 2018 novel Thrawn: Alliances, which takes place long before the timeframe of Galaxy’s Edge, has characters visiting Oga’s Cantina on Batuu. Furthermore, the most famous watering hole in the galaxy is named in Lou Anders’s novel Star Wars: Pirate’s Price and appears in a scene added to Star Tours: The Adventures Continue. 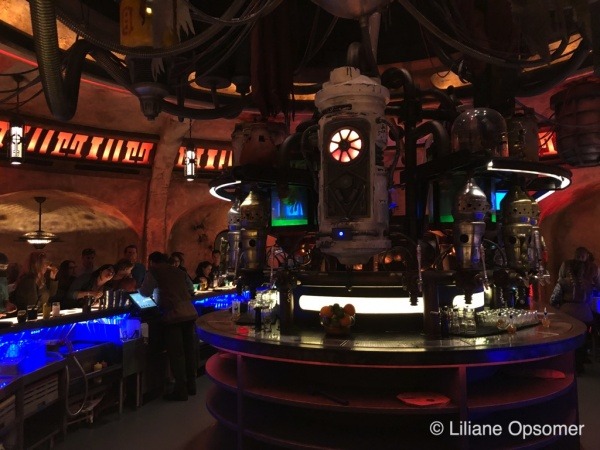 The proprietor, Oga Garra, is a female Bluthopian, and a visit to her cantina requires a reservation and a credit card. A $10 no-show fee, per person, will be charged if you decide not to stop by and at least try one of her famous concoctions.

But who would want to miss a drink, especially since it is the only establishment in Disneyland Park that serves alcohol. Another familiar Star Wars character, R-3X, the former droid pilot from Star Tours, has taken on the role of DJ at Oga’s. An international team of musicians and composers crafted an entire galactic playlist for him. It is said that the pilot droid crashed on Batuu and was repaired by Mobu at the Droid Depot. In settlement of a debt, he landed his current job at the crime boss’s cantina. 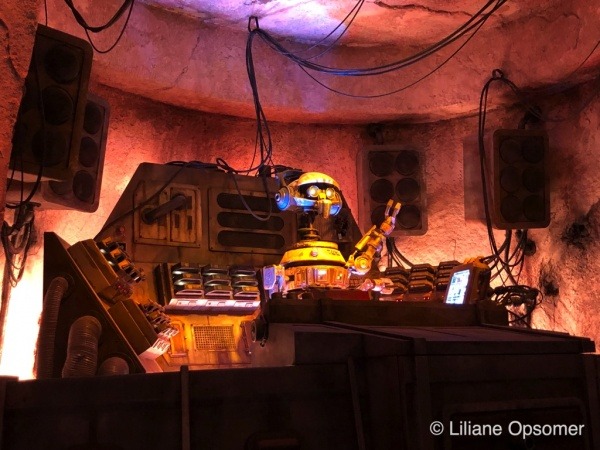 Rex is a Radio DJ and plays music from all over the galaxy. His playlist is about three hours long and includes a song from the famous Bith alien band, Figrin D’an and the Modal Nodes. Fans will recognize the sound similar to “Mad About Me” (also known as Cantina #1), as heard in Star Wars: A New Hope, when Luke Skywalker and Obi-Wan visit the Mos Eisley cantina on Tatooine.

At Ronto Roasters the podracing engine hearkens back to Star Wars: The Phantom Menace, while the perpetually complaining smelter droid turning the spit reminds Star Wars fans of the droid appearing in Jabba the Hutt’s palace in Star Wars: The Return of the Jedi. 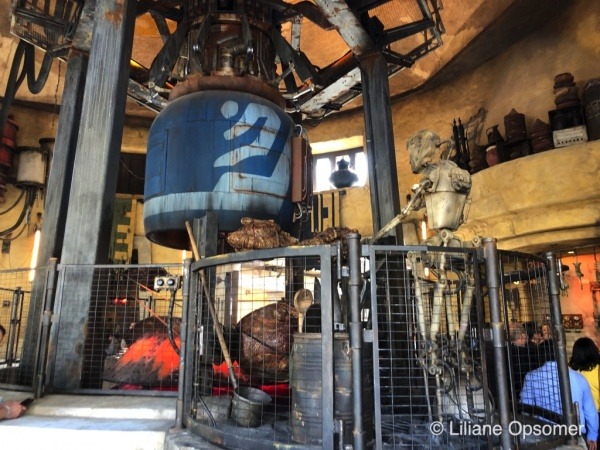 There are many more references to be found all over the new land, such as the story about the one-eyed Dianoga known to most fans from the Death Star trash compacter in Star Wars: A New Hope. The cephalopod loves to nest in sewage systems and other bodies of waters. Well, one found its way into a hydrator (a.k.a. drinking fountain) on Batuu. It is said that the Dianoga also travels through the pipes of the refreshers, known to earthlings as restrooms. I have seen her at the drinking fountain, but if you do catch her at the refresher, make sure to send us a picture. 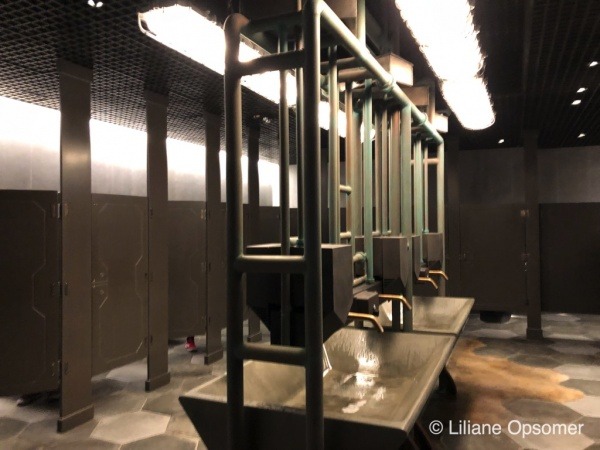 It is said that Savi’s Workshop is partially inspired by the scenes from Star Wars: The Clone Wars where younglings were taught to build their own lightsabers. And the Droid Depot sure brings back memories of little Anakin Skywalker, always eager to tinker with C-3PO in Star Wars: The Phantom Menace. 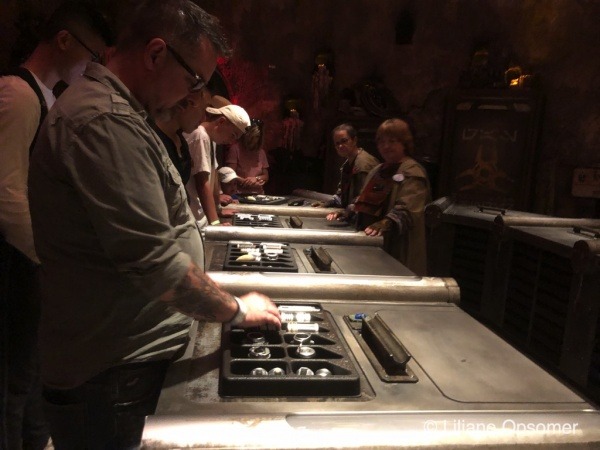 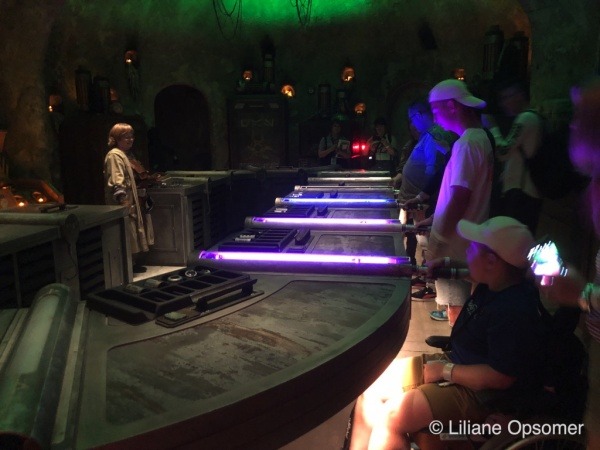 Full disclosure: I am a fan, and I had the opportunity to visit Star Wars: Galaxy’s Edge at Disneyland four times, yet I know there is so much more to discover and report about. If you want to familiarize yourselves with the story behind Star Wars: Galaxy’s Edge, check out Delilah S. Dawson’s book Star Wars Galaxy’s Edge: Black Spire, to be released in August of this year. If you have made a few expeditions to the Outer Rim, we would love to hear about it.

Have you visited Star Wars: Galaxy’s Edge yet in Disneyland? What did you think? What were your favorite parts? Let us know your thoughts in the comments, or on Facebook or Twitter!