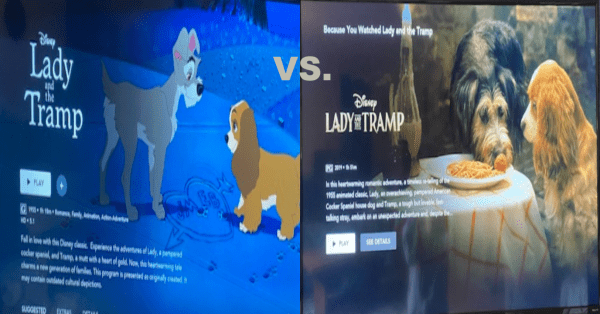 During this pandemic, I am trying to find things to be thankful for. I think we can all agree that it has given us time to watch a little more TV. I am fortunate to still be working, but can do it from home. So, instead of commuting home, I can turn on Disney+ right after I logout from work!

I took a look at the animated “Lady and the Tramp” vs. the live-action “Lady and the Tramp”. In addition to loving Disney, I’m also a dog lover, so naturally this has always been one of my favorite Disney classics. Just a note to add, I’m also a purist in many ways. For example, if I stumble across a great book series by reading a random one in the series, I must go find any that came before and read those as well as to finish them out in the proper order. This may well give away the fact that I liked the animated version better, but there were still things about the live action that I liked and admired how they modernized it.

The animated movie was done in 1955, which was only about 50 years after the time-frame in which it was set. The live-action was done in 2019 which is over 100 years after. I do think that makes a difference. We can’t go back and change some of the ways of the world back then, as it would not be realistic to the time period, right or wrong as some of those ways may be. I love the time period, right around the turn of the century, early 1900’s, makes it so charming to watch. People are still moving about by horse and carriage, they live in quaint neighborhoods with lantern style lighting and fireplaces alight each of the main rooms.

On that note, I feel like Disney did a decent job with some social issues but some altering some of the others made the live-action less realistic to the time period. Overall the live-action was great and the computer animation of the dogs was incredible.

Jock, the Scottish Terrier, was a female dog in the live-action. I did not feel as much affection for this dog as I did to Jock in the animated movie.  Not just because of her gender but because of the relationship between she-Jock and Lady. She was still as solid friend to Lady which was great.  In the animated series, he-Jock was somewhat old-fashioned and subtly offered to marry Lady so she could remain honorable and respectable. Is that old-fashioned and outdated? Yes! But truer to the time-period and culture.

In the animated classic, Jim Dear and Darling went away for a long weekend together, presumably their first after the birth of their child. They left the baby along with Lady at home with Darling’s Aunt. In the live-action film, the baby went along with Jim Dear and Darling, much to the dismay of Aunt Sarah who secretly hates dogs and wanted to have time with the newborn baby! In this case I find the live-action more plausible because most mothers of newborns are hesitant to leave them with anyone or be away from them.

One disappointment for me in the live action was the removal of the Siamese cats and the song they sang in the animated classic. Come on! I feel like the animated classic was a happy collection of different nationalities and culture. Jock being Scottish with his brogue and feisty demeanor, Trusty being the older retired but earnest bloodhound, Tramp being the streetwise stray and Lady being an innocent but well bred young lady. The Siamese cats were the epitome of cats that are known to be a high strung cat breed, but certainly not meant to be offensive to humans of Asian descent! To remove the Siamese cats and replace them with two male tabby type cats albeit cute and a little funny, I think was lame. I mean, then be consistent and take out Jock with the Scottish accent, and the Italian accented restaurant owner Tony along with the waiter at Tony’s and be done with it!

In my assessment of the animated Lady and the Tramp vs. the live-action version of Lady and the Tramp, another notable difference between the two movies was the removal of the zoo scenario. Lady gets muzzled based on Aunt Sara’s cats behavior and runs away. She meets up with Tramp and he saves her from being attacked in alley in both movies. In the animated classic, they make their way into the zoo, encounter a beaver and sort of offer the muzzle up as a method to speed up the beaver’s work, for which he is very happy for. He removes the muzzle from Lady and they all part ways. In the live-action there is no zoo. I’m glad of this because not having the zoo didn’t take away from the time period and I don’t have to worry and wonder how those animals are being treated. Tramp and Lady do have a beaver help them remove the muzzle in the live-action but it’s in the way of a beaver statue, which I think was a genius way of keeping the beaver in yet in a humane way!

Both movies have the famous Tony’s spaghetti and meatball scene. Both movies have Tramp abandoning Lady when she needed him and both movies have Lady end up at the dog pound, where she learns the ways of the world. They both keep the story of the rat attempting to attack the baby and Tramp proving his worth by saving the baby. Both movies have Jock and Trusty helping Lady chase the dog catcher’s van that had Tramp. Trusty does not get hurt in the live-action which I thought was a nice improvement. It has Tramp being hurt in the collision and hurt from the rat.

In the end Tramp is adopted by Jim Dear and Darling in both movies. What differs is that some of the dogs at the pound are also adopted into homes in the live-action, including Jock’s family. I think that was a good addition. While everyone loves puppies, Lady and Tramp do not have a litter at the end of the live-action. They show them interacting more with the human baby instead. I think that rescue, spay and neuter message came through loud and clear, without a disruption to the time-frame!

Overall, both movies are wonderful and worth the watch! I suggest having spaghetti and meatballs for dinner during or after too!

Have you recently watched either the live action or animated versions of Lady and the Tramp? What do you think of the two films? Share your thoughts in the comments, or on Facebook or Twitter!