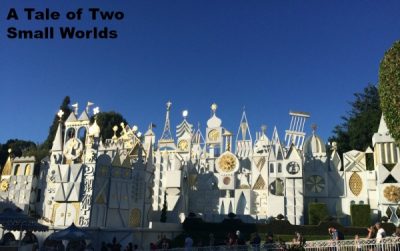 I think I may have ridden it’s a small world more than any other Disney ride. This is mostly because of my 11 year old daughter, who was so enthralled with this ride as a preschooler that on her fourth birthday, she insisted we ride it four times in a row.

Whether you’ve ridden it in Walt Disney World or Disneyland, you know that the ride features dolls designed by famed Imagineer Mary Blair, dressed in the native costumes of cultures all around the world, singing that song that WILL NOT LEAVE YOUR HEAD in their native language. You’ll board boats that will take you on The Happiest Cruise that Ever Sailed ‘Round the World. And in both locations, the ride is located in Fantasyland.

However, there are subtle differences between the two U.S. based small world rides.

After the success of it’s a small world at the 1964 World’s Fair in New York, Walt decided to bring the attraction to Disneyland, which had already been open since 1955. Here, it’s located in a spacious area outside of Fantasyland proper, known as the Small World Plaza. The queue, which moves quickly even when long, winds outdoors in the bright Southern California sunlight. FastPass is not available for this ride, but the lines are almost always quite reasonable. 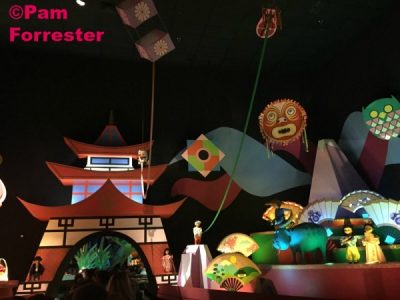 Walt Disney World’s Magic Kingdom opened with it’s a small world securely settled in Fantasyland proper. Although the bright façade looks very similar to its Disneyland counterpart, the Imagineers wisely decided to cover the entire area, keeping most of the queue out of the strong Florida sunlight. If you’re lucky, you can snag a seat at the Pinocchio Village Haus restaurant with a view of the loading area of this pretty ride. Fast Pass + is available for this ride.

Recently, Disneyland debuted a new addition to it’s a small world that had some purists worried – they added Disney characters to the ride. I must say, after seeing both versions of this ride, I find the addition of the characters delightful. The dolls of the characters resemble the classic Blair designed dolls, and each character is placed in the country from which their story comes. (For example, you’ll find Peter Pan flying above the United Kingdom.)

Disneyland also recently diminished the size of the rainforest section (causing many Disneyland purists to wear “Save the Rainforest” buttons) and replaced half of it with an American scene. Here you’ll find depictions of both the heartland farms of the Midwest and the buttes and mesas of the American Southwest. 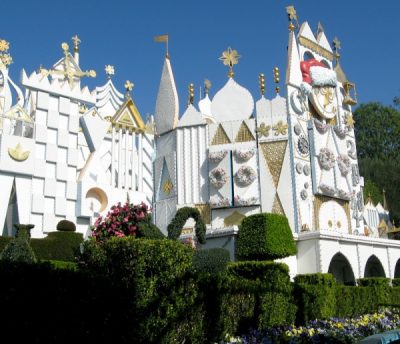 In both versions, you’ll experience the grand finale: dolls of children from all over the world, in white versions of their national costumes, singing the famous song together, in a beautiful representation of global peace and harmony.

From November until January, Disneyland’s version turns into the Small World Holiday. The interior and exterior of this ride is decked out in holiday finery. It’s especially breathtaking at night. Inside the ride, the dolls sing Jingle Bells along with that song that will not leave your head. Ever.

Although I wasn’t alive when this ride debuted at the New York’s World Fair, I’ve had the pleasure of riding it, multiple times, at both Walt Disney World and Disneyland. It’s a true Disney classic, and one that clearly emphasizes Walt Disney’s vision of the future, in which the children of the world are united in peace. 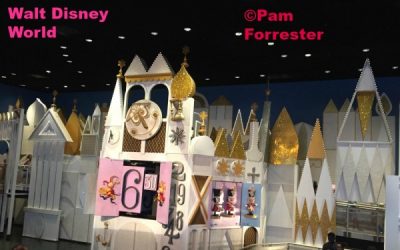 Which version of it’s a small world is your favorite? Share why in the comments.