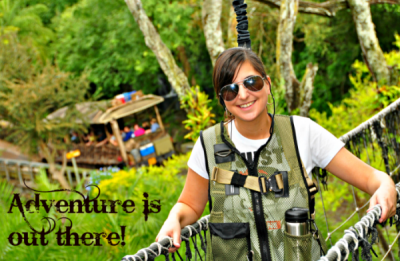 If you’re looking for some adventure and behind the scenes Disney magic on your next trip to the World, consider embarking on the VIP Tour through Animal Kingdom, Wild Africa Trek. This tour will bring you up close and personal with the animals of the Harambe Reserve as you journey through the off-road trails and conquer obstacles such as wobbly bridges over crocodile infested waters.  Below is a brief synopsis of my experience on the trek.

At the start of the trek we received a safari mesh vest, a canteen water bottle, a unique wild Africa trek name tag, and an ear piece to hear the guides.  We were also assigned a locker to keep personal belonging. After everyone gets suited up, the walking tour will begin. 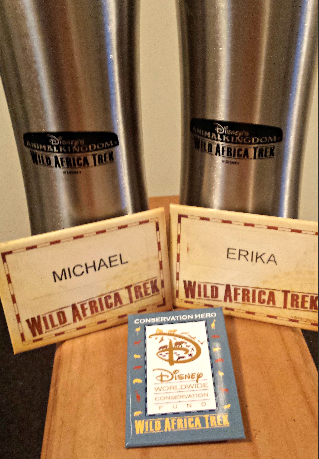 The Wild Africa Trek walking tour begins along the Pangani Forest Exploration Trail.  This part of the tour can be explored with regular admission; however, it is valuable to have both a guide who can provide additional information and answer questions, and a photographer to capture candid moments of both you and the animals. We were lucky enough on our tour to see a baby gorilla, so small he could barely walk. 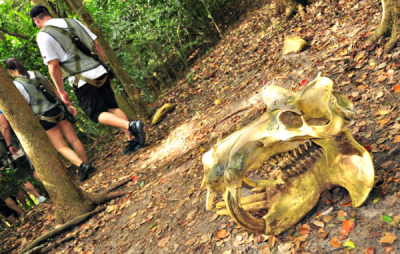 Next, we veered off the guest pathway for a secret behind the scenes trail.  After walking through the woods, we came to a clearing where the hippopotamuses were swimming in the water below.   Our safety gear was hooked up to a sturdy pole so we could lean over the cliff to get a closer look of the hippos. The guides provided some great info about the hippos while they fed them and took awesome individual pictures with the hippos in the background. 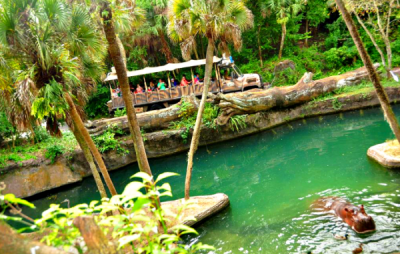 As we were walking away from the area, we heard the hippos making loud trumpeting noises and flapping around in the water. Per our guides the hippos were performing a mating call that is rarely heard in captivity. We were also able to catch a glimpse of one walking around on the shore.

Once we reached the first suspension bridge, we were hooked up to the safety gear and individually walked across the bridge. One of the guides went ahead first to capture our terrified faces on camera.  The initial steps onto the bridge are very daunting.  I could feel myself wobbling and it took a few moments to regain my balance and catch my breath.  It was tempting to stare down at my feet the entire time, (especially since there were quite some large gaps in between the boards) but I tried to look around and take in all of the scenery, such as the Kilimanjaro safari trucks driving by, the buzzards below, and the safari out in the distance. 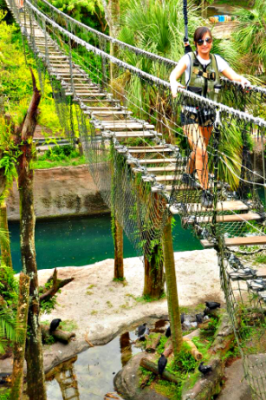 After completing the first bridge I felt like a champ, until I got onto the next bridge and there was something much scarier than dirt below, crocodiles.  This was the first time I really started to panic, looking down at the live crocs and thinking of all the things that could go wrong. Then I remembered that I was at Disney World and relief came flooding back. 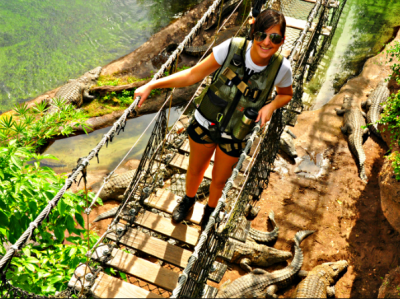 The bridge over the crocs was by far the most exhilarating portion of the trek and also the most adrenaline inducing walk I’ve ever taken.  Once our feet were firmly back on the ground, we got a closer look at the crocs via the same method used to view the hippos.  The photographer took pictures with the crocodile’s toothy grins lurking in the background. 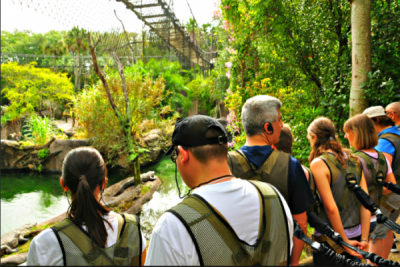 The second portion of the trek starts with a truck ride through the savanna. The advantages to this ride, over the regular safari ride are vast.  The truck can make more frequent stops and pause for a longer period of time as there are no trucks behind, rushing you along.  The truck can also go off the regular path in an attempt to get closer to the animals. The photographers are there to get great pictures of both you and the animals. On our trip, we were particularly lucky, and all three advantages came into play when a herd of giraffes came walking past our truck.  One walked by so close that I could’ve reached out and touched it. Not only was it very beneficial to be have the ability to stop the truck, every single guest on-board was able to get a group shot with a giraffe in the back ground. 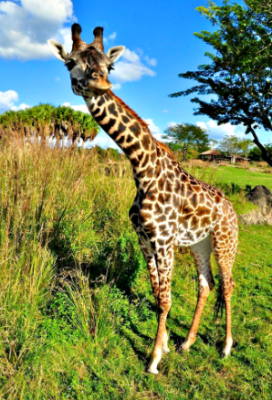 If you’ve ridden on the Kilimanjaro Safaris, you have most likely seen the lunch pavilion in the distance.  The African inspired meal is served exclusively for the trek and consisted of dried meats, fresh fruits, tomato humus, curried chicken salad, spiced shrimp, a smoked salmon, and even an edible flower.  After eating, the photographer captured some great shots of our party on the pavilion with the savanna in the background.  Binoculars are also provided on the pavilion for viewing of the elephants and lions.  When the lunch portion concluded, we got back on the truck for a drive through the remaining trails.  Again, like the Kilimanjaro Safaris, we traveled past rhinos and ostriches. 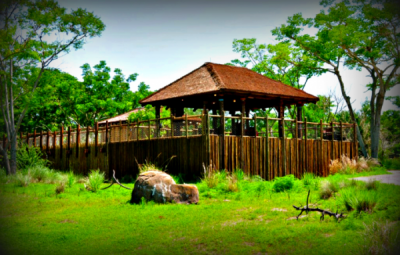 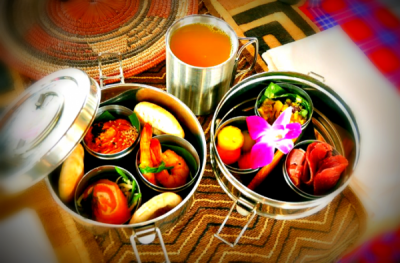 Sadly, this concluded the VIP safari tour.  Before we departed, our guides reminded us that a portion of the funds spent on the safari will go to the Disney conservation fund and gave us an opportunity to vote on what we would like our funds allotted too. If your are interested in learning more about the animals of Africa and crave out of the ordinary thrills, the Wild Africa Trek tour might be the perfect addition to your Animal Kingdom trip.

Have you experienced the Wild Africa Trek tour? Tell us about your adventures in the comments below!

I live in St Petersburg, Florida with my boyfriend and our dog. I have had a passion for all things Disney as long as I can remember. I love living in Florida so that I can visit both Walt Disney World and Universal Studios as often as my wallet will allow. ~Adventure is out there~