Transatlantic Cruise on the Disney Magic May 2011 – Day 9 Madeira

Mic here, after six wonderful days at sea  with no obligations beyond showing up for trivia, the show and dinner, and those only if we “felt” like it, we arrived in Funchal, Madeira.    We decided to skip the report on yesterday, while it was another wonderful day of relaxing for us, makes for a rather boring blog.  BUT we did want to mention they let us into the lab to make FLUBBER!   Super cool, and yes some adults couldn’t quite get it to work right.

Madeira is a Portuguese Island off the north west coast of Africa.   (for those of you that know Nikki from Spain, these islands are north of the Spanish island Tenerife where she lives).    I had really been hoping the stopover was Tenerife as it would have been great to see Nikki, and this was where the Magic stopped on its first transatlantic a few years ago.   Madeira is a well kept European secret, they do not get many American guests as you would have to fly to mainland Europe and catch a flight to Madeira.    Temperatures on Madeira hover around 70 degrees F year round.     The island was formed from a volcanic explosion and we got to see exactly how this works when we visited the caves on the north Coast.  Madeira is known for Madeira wine (we didn’t like it too much, it was very strong, and to me tasted like bad cooking sherry), wonderful fruits and tropical flowers, total population on the island is about 280,000, with 180,000 of those people living in Funchal.   As Madeira is so mountainous, most of the farm areas are terraces.    Most families have either a small “farm” area for their own consumption, or possibly they sell their fruit.     Bananas are big and grown at the lower elevations; up higher they would grow grapes for the wine.   As it’s a small island many items had to be imported from the mainland. 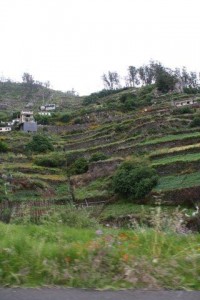 We had originally planned a DCL excursion, but decided to cancel that and booked a private tour through Daniels Taxi Tours (I highly recommend them; I think we were all quite happy).      Upon arrival at the port there were traditional Madeira dancers and musicians playing in the terminal, then a photo op in a bobsled or cart type thing, which is steered down the mountain by two men (we opted out of doing this actual adventure).

We were met outside by a driver with my name on a sign, his name was Oscar.   The owner of Daniels Taxi Tours was there as well, Daniel so we got to meet him.    We had two things on our priority list, the caves and seeing the Santana houses (super cute traditional houses that are only found in Santana apparently), and had asked Daniel’s wife to build us a tour around them.    Unfortunately there had been a landslide on the north shore, and the road between the two was closed.    So we had to choose one or the other.    As we felt the caves would give us much more information we chose to do the northwest side of the island.    So we now had a new itinerary.

Total cost was 140 Euro for up to 4 people, plus we tipped 20 Euro.    Back on the ship we found Stitch in a pirate costume, and saw Jack waving down to him from the next floor.  After some pictures and dancing with Stitch we bolted to the next floor and tracked down Jack.    He was heading into a crew area but came out for some pictures with us. 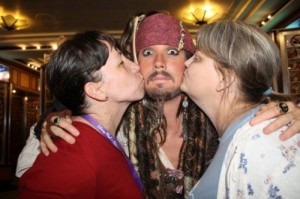 Tonight after our usual trivia or maybe it was Feud, we had our pirate’s dinner, followed by the Pirate show and fireworks on the upper deck.     Pretty cool to be watching fireworks on the Disney Magic in Portugal/Africa waters.

We headed down for more trivia, and following this a few of us headed to Diversions tonight to play Rummy.     (Missy and Ross headed to bed).    After some rousing hands of rummy we did check out the Krazy Karaoke next door in Rocking Bar D.    But it was late and we were tired.