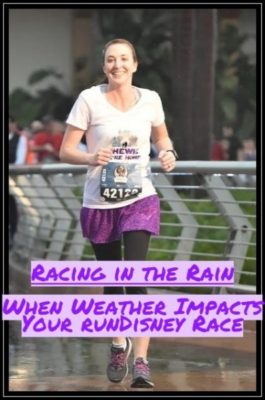 One of the most common questions that pops up when preparing for a runDisney event is: What happens if it rains? Ask this question while planning your race weekend and you will probably hear the same answer over and over again…”you’ll get wet!” While I can confirm that this is true, encountering a storm during a race event can make things a lot more complicated than that, especially if lightning is involved. How complicated? Well, at this year’s Star Wars Rival Run Weekend, I found out!

The morning of the Rival Run 5K started like any other race morning for me. I got up ridiculously early. Got dressed. Hopped into the car with my running companions and headed to Epcot. It was early, but I was a little extra excited for this race because it was my birthday! What better way to celebrate than by running a race?

The excitement was building as the 5:30 a.m. start time approached. We were in Corral A (the first corral), so we would be running soon. Or so we thought. I looked at my watch and realized it was after 5:30 and the race had not begun. They hadn’t even played the national anthem yet. Something wasn’t right.

A few minutes later, instead of watching fireworks to kick off the race, we were told to evacuate the corrals due to an electrical storm in the area. Thousands of people had to take shelter in Epcot, resort buses, and personal cars because it was not safe for us to be out on the course. As we made our way out of the corral, we checked the radar and saw what was coming. I was heartbroken because despite being told that the race may still occur, things weren’t looking good.

Shortly after we made it to our vehicle, the rain began pouring down and the lightning was flashing all around. Our chances of running the race seemed to diminish with every minute that ticked by. Some friends of ours remained in their car while others gave up and went back to the hotel.

I scanned social media to pass the time and to see if there was any new information on what was going on. As I scrolled though, I finally saw a post that offered a new hope! They were moving the volunteers back into position! The race was happening!

The Race is On!

I quickly texted the friends that had left, as we hopped out of the car and headed back to the start. Cast Members were walking up and down the parking aisles to let everyone know the race was back on. As we hurried back, I noticed that the corrals were wide open and the announcers told us that this would be a one wave start. Definitely different from what I was used to.

We were separated from others in our group, but fortunately, everyone made it back to do the race. Even the friends who left and went back to their hotel at Disney Springs made it!

We only waited a handful of minutes before the race started and everyone took off together. It took a minute to cross the start line with so many people, but we had waited nearly 2 hours at this point and I was just happy to do the race!

The course was definitely more crowded because everyone started at the same time. It was also shortened to approximately 2.6 miles. This didn’t give everyone much time to space out, but for the most part, people were courteous.

The rain continued, which kept us cool, but we were drenched pretty quickly. The characters were pulled from the course due to the storm, but members of the 501st Legion braved the rain to pose for photos with runners. I was so happy to see them out because they absolutely made the race! 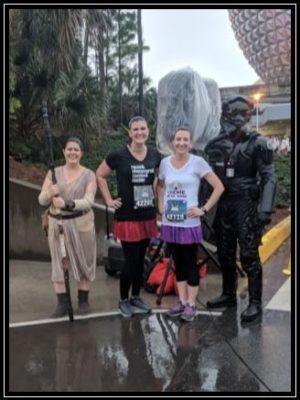 After a few quick photos with the 501st, we made our way to the finish line. This finish was interesting because volunteers were asking runners to slow down as they crossed. An inspirational news story was being filmed around the same time we finished and it also seemed that the volunteers wanted to make sure we crossed the finish safely, without slipping. Even at a slower pace, crossing the finish line and receiving my medal was exciting.

We finished at a great time because the rain had finally stopped and some of the characters were starting to come back out. We took a quick picture with Jabba the Hutt. Then we really lucked out because just as we finished, Boba Fett came out and we were able to get a picture with him without waiting in a line!

We left the race soaked, but ecstatic. We all had a great time! With the first walk to the corrals, the walk back to the car, and the speed walk/jog/run back to the start line, we certainly covered 3.1 miles. So, even though the course did not cover the full 5K distance, I’m still calling it a successful finish!

A friend of mine once said that each medal is part of your story as a runner. Ever since then, I have looked at each race as a part of my own personal story. This may not have been the race I was expecting, but it was one of the most memorable and this medal definitely tells a story of its own.

Want to run a runDisney race? Contact The Magic for Less Travel for more information and a free, no-obligation quote.