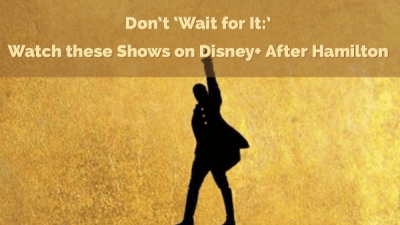 The problem: you finished watching “Hamilton” on Disney+ (maybe it was two or three times) and now you’re wondering what will fill the Hamilton-sized hole in your heart. Honestly, that may be hard to do. However Disney+ is not without great movies and shows for theatre lovers. Here’s a few suggestions, and if you choose to watch “Hamilton” again — well that’s OK, too.

The easiest way to cure post-“Hamilton” blues is to watch is “Hamilton In-Depth.” In this round-table discussion, stars of the show, including Lin-Manuel Miranda and director Thomas Kail, provide a little background to the Tony-winning musical. Also, not a Disney+ show, but for Hulu subscribers, a documentary about Lin Manuel Miranca’s hip hop group, Freestyle Love Supreme, will be out July 17.

Theatre-buff or not, “Encore!” is a completely engaging docuseries that brings high school theatre kids together years after graduation for a one-night only encore of their senior production. You’ll enjoy seeing these people get another chance at the spotlight and even get closure on years-old school drama.

The 1992 musical “Newsies” was initially a box office bomb, but later gained a cult following, which led to the Broadway show in 2012. You can watch a 2017 live taping of the musical (and also, the movie if you’re inclined) of the newsboys strike of 1899.

It has music, Emily Blunt, Dick Van Dyke, and Lin-Manuel Miranda as Jack the lamplighter. The sequel of sorts about the practically-perfect English nanny is just as delightful as you’d hope. And a must for fans of Lin-Manuel.

When you need to give the Hamilton soundtrack a break, why not try other music from Lin-Manuel Miranda? The prolific songwriter wrote music for this Disney animated feature. It’s a win-win for parents and their kids.

This one may be a bit of a stretch. “The Liberty Story” is a 1957 episode from the “Disneyland” series about the Boston Tea Party, which started the American Revolution. With excerpts of “Johnny Tremaine” and “Ben and Me,” it’s a watered down, and sometimes fictional, depiction of American history, but perhaps a precursor to more in-depth content. It was also a promotion for Liberty Square.

“Hamilton” has introduced many viewers to do a deeper dive of theatre and or history. Don’t be afraid to try something new in the Disney+ catalog. If you need more suggestions, you can find Disney+ reviews and guides on the Mouse for Less blog, including how to pick a movie for toddlers, and what to watch if you’re a history lover.

What are some of the things you think people should watch on Disney+ who loved Hamilton? Share your thoughts in the comments or on Facebook or Twitter!

I'm a moonwalking, Spice Girls-singing child of the early 90s. I grew up on all things Disney (I've never met a princess I didn't like) and I count seeing Cinderella's castle as a major milestone in my life. It's a pleasure to meet you!