Walt Disney World versus Disneyland.  Ooo!  That almost sounds like it’s right out of a sci-fi movie, doesn’t it?  Like Godzilla Versus the Sea Monster?  Well, this won’t be a sci-fi mini-series, but I will be doing some comparisons.

Someone suggested that I should do a post or maybe series of posts about what Walt Disney World does better than Disneyland and vice versa.  After reading the first few lines of the email, I was nodding in agreement.  Yes, Walt Disney World does this better, and Disneyland does that better.  Okay.  I agreed so far.  When I got to the bottom, I stopped.  Shook my head…  Read again…  Really?

This made me think a little bit before realizing that this could be a fun series of posts.  Why?  Is it because Walt Disney World definitely does a particular thing better than Disneyland, or is it Disneyland that does it better than Walt Disney World?  Honestly, for the most part, I think it all comes down to each person’s opinion and what that person expects from his vacation.

So, let’s start with transportation from the airport to the resort today. 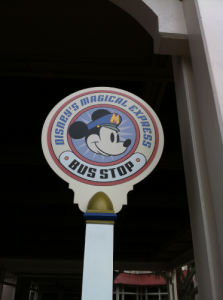 Walt Disney World seems to have the upper hand in getting guests to the Walt Disney World Resort-owned hotels from Orlando International Airport.  Disney’s Magical Express service provides complimentary transportation from the airport to the resort hotels.  While there are other transportation options (town car, rental car, shuttle), my children will not allow me to even consider them.  No, it is Disney’s Magical Express only.  Why you might ask?  It is because the kids see this bus ride as the official beginning of the vacation.  Once the video starts playing, the vacation has started, and it is time to get in the Disney spirit.  PLUS, I don’t have to deal with the luggage.  I wave goodbye to the suitcases when we leave them at our departure airport, and they magically appear in my resort room.  Mickey Mouse sure has some great helpers all over the country!