I have to confess that the first time I went to Disneyland — after many trips to Walt Disney World — I was kind of disappointed. I missed the feeling I got in WDW of being in an entirely separate world, because I could see the ordinary buildings in the background behind the Disneyland rides. Disneyland felt tiny (not to mention that many of the rides were in the wrong place!). I did eventually learn to love it (the Pirates ride is definitely better there) and that feeling was strengthened when I took the “Walking in Walt’s Footsteps” tour last August.

We met at the tour booth near the Disneyland entrance. Our tour guide, Ryan, was wearing the traditional plaid vest, and it was soon clear that he not only knew a lot about Walt, and about Disneyland, but that he was quite inspired and enthusiastic about it. We had earphones so we could easily hear him as he took us at an easy pace around the park.

Ryan shared much of the history of the park with us, and talked about what the rides and ideas meant to Walt. I loved the feeling that I was literally walking in Walt’s footsteps and riding rides that he himself had designed and enjoyed. 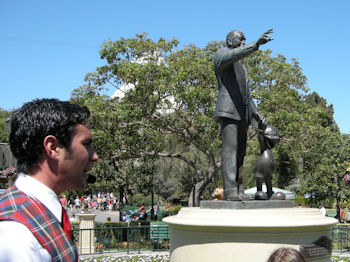 Ryan pointed out famous “partners” statue, which shows Walt and Mickey Mouse. He told us that Walt didn’t really want a statue of himself, but when his staff insisted, he said “If you have to do it, make me taller.” So he’s one inch taller in the statue than he was in real life.

The road to creating Disneyland was not a smooth one, and Ryan emphasized how important the support of Walt’s brother, Roy, was in making it happen. It was Walt who had the creative vision, but Roy who had the ability to find investors, manage the money and keep things on track.

We learned a lot about the concept of “forced perspective” which Walt used to make buildings look taller and streets look longer. By making the upper story windows on a building smaller, for example, you make the building appear larger. A similar approach was also used to solve a problem with the statues of Snow White and the seven dwarves, which are on display near the castle. The manufacturers mistakenly made the dwarves as tall as Snow White. The imagineers solved this by placing the dwarves lower down and in the front of the sloping riverbank, and Snow White at the top and further back. Because she looks like she’s farther away, we see her as being taller.

Even after the park opened, Walt never stopped trying to make it better. Once Walt was in the park and he overheard one guest suggest to another guest that they go on the Jungle Cruise. The second guest said “Oh, I’ve already done it, and it would be boring to do it again.” Walt was horrified — he didn’t want anyone to think his rides were boring! That’s when he came up with the idea of having the boat captains telling corny jokes on the ride, so that it would be different every time.

Walt had wanted to have live animals on the Jungle Cruise, but was soon convinced that it simply wouldn’t be practical and could be dangerous. I think he’d be happy to know that those obstacles were quite effectively overcome when Animal Kingdom was built.

Walt was fascinated with technology (as anyone who has been on the Carousel of Progress knows!). Ryan showed us the sign on the Enchanted Tiki Room attraction, which says “Walt Disney’s Enchanted Tiki Room.” His name is on it because Walt loved the idea of this attraction so much that he paid for it himself. We had a chance to touch and see some of the electronic flowers and how they moved; the technology may seem pretty ordinary today but in the 1950s it was cutting-edge. 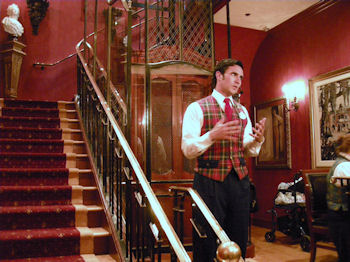 Ryan also took us to Club 33, which is a private club inside Disneyland. Walt created this club, with its private dining room, to have a place to entertain his friends and conduct business. It’s still a private club, and the waiting list to join is 12 years long. I asked Ryan how much it cost to become a member, and he said (basically) if you have to ask, you can’t afford it. So the front entry hall is probably as far inside the club as I’m ever going to get. 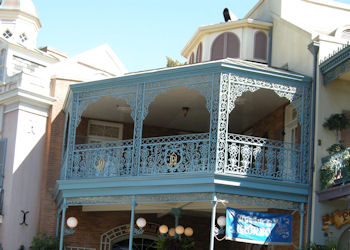 Walt died before it could be finished. Roy couldn’t face living there after Walt had gone, so it was never used. But the initials are still there.

He also showed us the room above the firehall, where a light is always burning in the window. That was Walt’s office, and the tradition had been that the light would be lit when he was in the office or walking around the park. After he died, the light was left burning all the time, to symbolize that now he is always there.

Ryan shared so much information about how the parks were created and the vision Walt had for it that I really wished he’d given us handouts! I highly recommend this tour. I not only learned a lot about Disneyland, I learned more about Walt, Roy and the amazing imagineers who gave us this magical gift.