I was looking through my son’s autograph book from a few years ago with my kids the other day. This is a favorite past time for them. When we go to Disney World, one of the first things that I buy for them is the autograph books with the slots for the pictures. When we get home I print out the corresponding photo and slide it in next to the character’s autograph. And then it becomes almost like a bedtime story for the kids. Every now and then they will pull one down off of their bookshelf and I retell the story of what happened in the pictures and the kids add what they remember (or in some cases what they think they remember!). Anyway, so I was looking at the one from 2008. To give a little background, my son was not quite 3 and slightly speech delayed. I very seldom understood what the poor child said to me until way past his third birthday. On this trip however, we had a rare moment when I understood EXACTLY what he wanted and in the excitement of understanding him, I felt obliged to reward his request. He wanted to meet Buzz Lightyear and ONLY Buzz Lightyear. I felt like this would be simple enough to accomplish and I decided that no matter what, my son was going to meet Buzz Lightyear. We were at Disney World for five full park days; however it was not until day two in the parks that I became aware of Clayton’s desire to meet his character hero. It was our first day in Magic Kingdom and we were in Tomorrowland exiting Buzz Lightyear Space Ranger Spin when Clayton saw Buzz across the way. He looked up at me and while I didn’t really catch every word he said, I knew that he wanted to go meet Buzz. But we were a large group, five adults and six children and by the time everyone exited the ride, regrouped and I told them what I wanted to do, Buzz was leaving for a break. It was going to be a few hours until he returned so waiting was not an option at that time. Luckily, Clayton did not pitch a fit, though he did look disappointed when I told him we would have to come back later. Unfortunately the opportunity to go back to Tomorrowland did not come back up that day and I remember feeling guilty that I had let Clayton down. I knew that we had another day at Magic Kingdom and I vowed that I would take him no matter what.

On our last day we were in Magic Kingdom, the afternoon was wearing on and I knew I was running out of time. Somehow I managed to get the group in gear with promises of another ride on Space Ranger Spin which was a favorite for everyone. As we walked over to the ride I saw Buzz Lightyear standing at his meet and greet spot and the line was LONG! I told everyone else to go ahead and go on the ride; Clayton and I were going to meet Buzz. I really didn’t care at that point how long the line was, I would wait. Clayton and I joined the line, in the sun I might add. After a brief five minutes or so, the CM stepped out and announced that Buzz was going to take a break! I was immediately in a panic! However, the CM continued that Buzz would be back out in about 10 minutes and we were welcome to wait. Ugghhhh! Well, of course I knew we were going to wait. Clayton was very content to wait because he knew we were going to see Buzz. He was swinging from the rails and rolling around on the hot concrete, what could be better? All at once people got out of line since they were not willing to withstand the blazing sun and lack of shade, so before I knew it we were second in line behind a very pleasant family from the U.K. I struck up a conversation and we chatted for the next 10 minutes or so. As the sweat was rolling down my back I began to wonder what 10 minutes really meant. After 15 minutes I was not so excited anymore, and at the 20 minute mark, I was about to come unglued. Clayton was starting to whine he was very hot and out of patience. I was thinking about tossing in the towel and admitting defeat, when the door opened out sauntered Buzz! Hooray!

The family in front of us had their meet and then it was our turn. I turned to Clayton, grabbed his hand and told him that it was his turn to meet Buzz! He looked at Buzz, looked at me and just freaked out. There is no other way to put it. He would not budge. So what does a hot, sweaty mom with no patience left do? Not what would a rational mom do, what did I do? I scooped up Clayton, walked up to Buzz and presented my son to him. I told Buzz that it was the last day of our trip and Clayton had been waiting patiently to meet him, although now he was having second thoughts. Buzz did the little happy dance thing that the non-speaking characters do, stamped Clayton’s autograph book and directed me to stand on the other side of the podium for the picture. Clayton had a death grip on me and I am pretty sure he was trying to get away, but we have the autograph and the picture and for that we were both happy… after walking away that is. 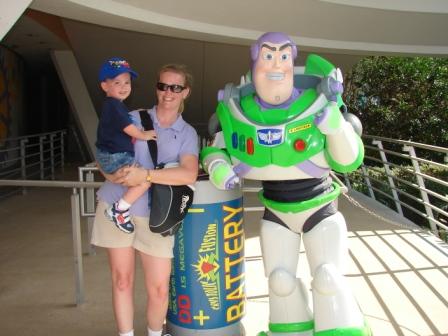