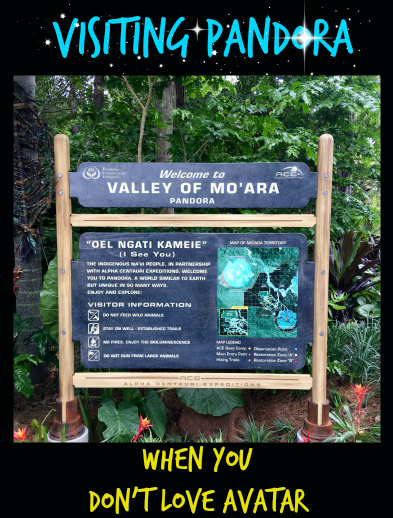 Yes, I’m speaking of James Cameron’s 2009 blockbuster film. I know it has the highest gross theatrical revenues of any movie EVER ($2.7 billion!) and has adoring fans around the globe. I am just not one of them. Perhaps the excessive hype raised the bar too high. Maybe it was the lack of real connection with the characters (I cannot name a single one, can you?). Or even the whole military involvement aspect (just not my thing). It isn’t that I disliked it as much as I found it to be largely unremarkable.

To say I was less than ecstatic with Disney’s 2011 announcement of ‘Pandora-The World of Avatar’ is, well, a substantial understatement. Seriously, the park-that-shall-not-be-named down the street had just opened The Wizarding World of Harry Potter and THIS was Disney’s answer?! Not to mention, how does it even belong in Disney’s Animal Kingdom? I was admittedly concerned. And added to that mix of disappointment and concern was a heaping dose of “Is it EVER going to be completed?” (It took 6 stinking years, people!)

Well, Disney’s Animal Kingdom finally welcomed guests to Pandora officially on May 27, 2017. And, clinging to my faith in all-things-Disney, I kept an open mind as best I could and headed down the following weekend. In a decided act of brilliance (and attempt to hedge my bets), I brought along my husband, whose appreciation of Avatar far exceeded my own. I mean, he had actually PAID to watch it at least twice without being forced to! In my book, that’s hard core.

Now, while I did not seek out every tidbit of information, every picture or promotional video I could did up, it is fair to say I also didn’t shield myself entirely either. I saw stuff. So, as we approached the bridge that promised to transport us 4.37 light-years away to the Valley of Mo’ara, I felt confident that I had a pretty good idea of what to expect.

Boy, was I wrong…

I had a full (if not entirely conscious) expectation that, once in the land of Pandora, guests would be flooded with constant Avatar references. More than anything, I expected it to ‘feel’ like the movie, which, in my opinion, was largely unsettling and sad. However, while every feature of Pandora does have inherent backstory, and there are definite nods to Avatar, the land does NOT rely on the plot lines or the characters that were introduced in the movie. On the contrary, it is about Pandora – the land itself, the native (Na’vi) culture, the flora and the fauna. And, not unlike the computer generated Pandora from the film Avatar, it is visually stunning. Both by day and by it’s bioluminescent nights. Pictures do it very little justice.

I found that I was not entering a movie experience, when I crossed into Pandora. No, I was a tourist visiting an exotic, far away land. It was unlike any other land Disney has created. There are no attraction marquees marking ride entrances. Not a single Mickey-shaped food item to be found in the eateries. We encountered none of the plethora of Disney-branded merchandise we have come to expect (not even the shopping bags!). The FastPass+ scanners are ‘Mickey-Free” as well. It’s a world with a history, like so many others, that wasn’t always peaceful. And THAT is what Avatar depicted…history. Not the tranquil moon I was visiting. Very quickly the events of the film faded into an inconsequential chapter of a much grander story. Merely an unfortunate event that happened a long time ago to this peculiar and fascinating place.

It was then that everything fell into place for me. Pandora-The World of Avatar is a perfect fit for Disney’s Animal Kingdom! It’s the next extension of the vision shared by the park as a whole…that of conservation and environmental stewardship. When the park was opened April 22, 1998, Michael Eisner (Chairman and CEO of The Walt Disney Company at the time) made the following dedication:

“Welcome to a kingdom of animals… real, ancient and imagined: a kingdom ruled by lions, dinosaurs and dragons; a kingdom of balance, harmony and survival; a kingdom we enter to share in the wonder, gaze at the beauty, thrill at the drama, and learn”

As it turns out, I didn’t need to love Avatar to love Pandora. All I needed was a little change in perspective that only  floating mountains could give. 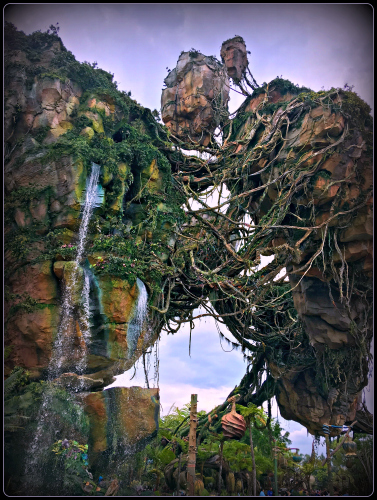 Have you visited Pandora – The World of Avatar yet, but weren’t a fan of the movie? What were your thoughts on experiencing this new land? Share them in the comments.

Between actual trips to WDW and the continual research and planning of trips to WDW, Holli chases after 3 kids (preschool through University!), a really cool husband, and a mostly sweet (and slightly naughty) weimaraner named Bella. As time permits, she enjoys reading, trying new recipes, sugar artistry, crafts of all manner, and creating her own mouse ears. Because one can never have too many mouse ears. Her family would probably tell you she has an incurable case of ODD-Obsessive Disney Disorder, and they would not be wrong. Thanks for stopping by!