The movie Wreck-It Ralph opens with Ralph telling his back story to a group of arcade villains at a Bad-Anon meeting. Bad-Anon is a support group for the bad guys found in the arcade games. Ralph doesn’t want to be a bad guy anymore, but he is told by Street Fighter’s Zangief, “just because you are a bad guy, doesn’t mean you are a bad (pause) guy.” The group closes its meeting with the Bad Guy Oath which says, “I’m bad, and that’s good. I will never be good, and that’s not bad. There’s no one I’d rather be, than me.”

Did other Disney villains take that same oath? After watching some recent Disney shows and movies, I think that maybe they did.

The Evil Queen … Let’s start with one of the staples of evil in the Disney universe. Let’s face it…Evil is in her name. At one time, she hired someone to cut out her stepdaughter’s heart just because she was prettier than the queen was. However, on the hit ABC show “Once Upon a Time“ (which is owned by Disney) and we see Regina (the Evil Queen) kill her own father so she can get her “happy ending” by taking all of the characters featured on the show to the town of Storybrooke. But, just three seasons in, we find Regina is actually helping Snow White and Prince Charming defeat the Wicked Witch of the West. Sure I tried to kill you at one time, but we’re friends now, right?

Speaking of “Once Upon a Time,” Captain Hook … Before Pirates of the Caribbean came out, Captain Hook was the baddest pirate alive (and to some, he still is). He wanted to kill Peter Pan, as well as the group of children that were associated with Peter Pan. Plus, he had a hook for a hand! However, on “Once” he is another one of the good guys. His pending romance with the lead character Emma actually has me rooting for him (and not in a dark “I want the bad guy to win” sort of way).

Maleficent … in Sleeping Beauty, when she doesn’t get invited to a child’s party, she decides to put a death curse on the child. When the child survives, she turns into a fire-breathing dragon! But the movie Maleficent asks, what if we got the story wrong? It appears that this story started way before Aurora’s birth. Is it possible that the real bad guy was King Stefan? Was everything I know about Sleeping Beauty a lie? 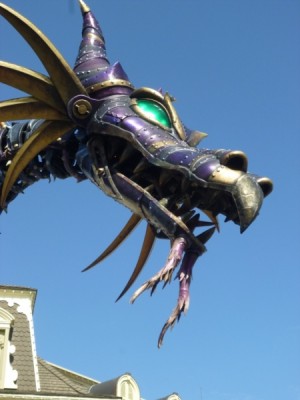 What if we got other Disney stories wrong? In the animal kingdom, the lion with the darkest mane is the leader of the pride. Did Scar have a legitimate claim? Did Mufasa and Simba  steal what was rightfully his? Though I don’t agree with his tactics (murder and guilt), I’m thinking Disney might have left some important information out of The Lion King.

Some characters appear to have taken the Bad-Anon oath before we see them on the big screen. Did you know that in the Hans Christian Adersen’s fairytale “The Snow Queen,” Elsa (the Snow Queen) was actually evil? In fact, she was supposed to be the bad gal in the movie Frozen until Disney decided to make Elsa and Anna sisters thus changing the dynamic of the story (and increasing Disney’s profit margin).

I can’t wait to see which bad guy takes the Bad-Anon oath next. Who do you want it to be? And who is your current favorite baddie, who’s maybe turned good?