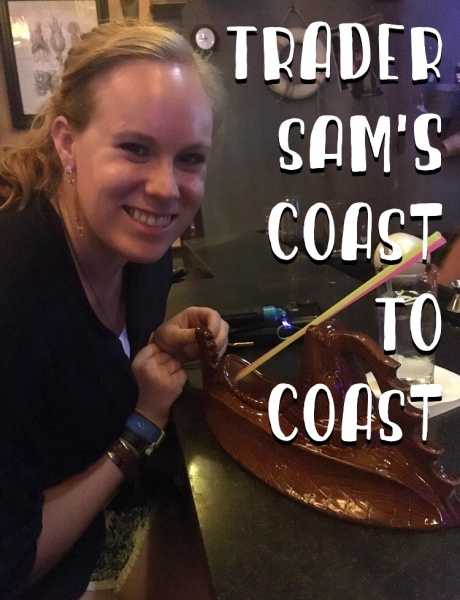 Upon hearing about Disney’s Trader Sam’s Tiki Bar and Grog Grotto just a couple of years ago, I was determined to visit the coast to coast versions and compare the two experiences. After all, they have been touted as the most themed and outstanding lounges on properties. So I was curious, what made each one so great?

First, a little history. Trader Sam’s in Disneyland came about first in 2011 with the Disney World version opening in 2015. The overall theme is that Trader Sam (remember him? That head hunter you met on the Jungle Cruise that will trade two of his heads for one of yours?) found an interest in mixology and partnered with the Jungle Cruise Navigation Company to build this bar. But it doesn’t just stop with the Jungle Cruise. There are several other Easter eggs and themes from the Tiki Room and other properties across the Disney Parks (hello Indiana Jones and 20,000 Leagues Under the Sea!). Even if you don’t drink, it’s worth checking out this space and just enjoying the atmosphere and theming.

So let’s see how they stack up against each other!

Trader Sam’s in Walt Disney World seems much more difficult to find than in Disneyland. You have to go down a “back hallway” so to speak and open a nondescript door to find the grotto. The decor inside however is outstanding. The giant octopus arm coming across the bar and the animated windows out to the volcanoes that (spoiler alert) explode upon ordering a drink are awesome. I always love the different lanterns hanging up and I always look in the bookcases to find little Easter eggs and tiki themed items.

Trader Sam’s in Disneyland has much more fanfare upon entering the bar. Tiki torches lining the sidewalk leave little doubt that you have arrived. The door is also beautifully carved with tiki inspired designs that make it a substantial statement on an otherwise smaller building. When you enter the bar, the amount of memorabilia on the walls is overwhelming. I could have probably spent hours in there looking at the small notes and photos pinned up along the walls. I am also a huge fan of the tiki columns just like in the Tiki Room attraction. The memorabilia in the Disneyland space feels much more substantial and organic than the Disney World version, which I personally appreciate.

What Disney World lacks in memorabilia it makes up for in it’s room animations. The “windows” allow for a fun volcanic eruption and who can miss the giant Tiki Goddess that wakes up when you order an “Uh-Oa!”? My favorite is the Nautilus that gets the giant squid involved. Disney World definitely takes the cake on how the room reacts with each drink ordered. That doesn’t mean that Disneyland’s Tiki Bar doesn’t try. There’s some sound effects and lighting changes, and the exploding volcanoes, but Disneyland falls prey to the “it came first” curse as Disney one upped their game with the newer Disney World version.

The servers at either park definitely can make or break the experience at Trader Sam’s. I’ve seen hilarious antics by the servers getting their floaties out for when the Nautilus is ordered and pulling a hippo on a string around the bar for a HippopotoMai-Tai. However, consistency is the name of the game and this is where the Disney World experience lags behind Disneyland. Even with as many Krakatoas that are ordered in the time that we were in the bar, there was not a consistent response to the room changes. Sometimes they pull out the air raid horn. Sometimes the server gets into the horror of the explosion. But not all the time. In my opinion, that lack luster performance by the staff really brings down the experience.

The lack of animatronics in Disneyland might actually be a blessing for Disneyland as most of the experience is then put on the bartenders and servers. I believe this is what makes this experience magical. No matter how many times a Shipwreck was ordered, it was still the most catastrophic event that happened that night and you always got sprayed with water by the staff member behind the bar. The Uh-Oa! show was spectacular every time and someone was always turning a raid horn with the Krakatoa. You could tell the bartenders were having fun too as they were laughing and even harassing each other throughout the night. The biggest effect this had on the experience is how much the energy from the staff passed over to energy in the customers. Everyone got into the shenanigans which made the overall experience so much more fun.

The drinks for both experiences are top notch in my opinion. I am a huge fan of the Nautilus, Uh-Oa!, HippopotoMai-Tai and Shipwreck on the Rocks. If you are not an alcohol person, the non-alcoholic drinks are superb as well (as I found out when I visited while pregnant)! I am a particular fan of the Skipper Sipper, which you can find on both coasts.

So where do we land on the overall experience? If I had to pick a winner, I would probably say Disneyland’s Trader Sam’s Tiki Bar wins. While Disney World’s Grog Grotto is outstanding in the animatronics and I love the Nautilus, the servers and overall energy of Disneyland take the cake for me. Interactions with people are what I remember long after the taste of the drinks fade away and that in my opinion, is one of the big things that makes Disney so magical.

What about you? Which coast’s Trader Sam’s do you prefer to enjoy? Share your thoughts in the comments!