For those who have visited Disney World and fallen in love with the magic, a tour of Disney’s first theme park, Disneyland, and its companion park, Disney California Adventure (“DCA”), should be on your bucket list.  Seeing them both in one day might seem out of reach if you’ve ever tried to see more than one park in the Florida resort, but the close proximity of the two California theme parks makes seeing the highlights of both a possibility in California. 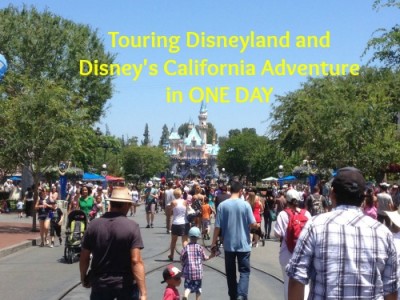 In June 2015, I had an opportunity to go to Anaheim for one day and could think of no other way to spend it other than at Disneyland Resort.  I was alone, giving me the advantage of touring at my own (fast!) pace and seeing only the attractions I wanted to see.  As in Florida, arriving for rope drop assures you of lower crowds and short waits during the first few hours of touring.

On my touring day, both parks had an 8:00 a.m. opening.  I arrived in the parking area around 7:00 a.m., took the tram to the Esplanade, purchased my one-day, park-hopper ticket, and was in line for Disney California Adventure  by 7:15 a.m..  Crowds were predicted to be high on this particular day, but a little less so for Disney California Adventure.  I also wanted to get a World of Color FastPass first thing, so going to DCA for morning touring seemed to be in my best interest. 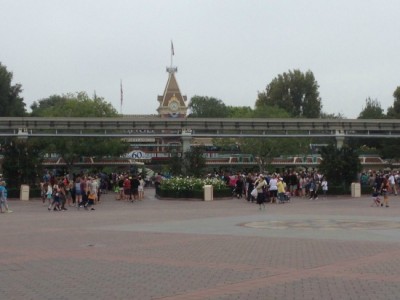 In addition to obtaining the FastPass for World of Color, I knew from various sources that going to Radiator Springs Racers early was extremely important if I wanted a shorter wait.  We were let into Disney California Adventure at around 7:30 a.m. but were held at the end of Buena Vista Street until the official 8:00 a.m. opening.  At 8:00 a.m., we were released into the park.  The largest crowd headed straight for Cars Land, while I made a quick walk toward Grizzly River Run, where the FastPass machines for World of Color are located.  I quickly obtained my FastPass with no wait.  (The World of Color and Fantasmic! FastPass machines in Disneyland Resort are not connected to the rest of the FastPass system, so you are able to get additional FastPasses for rides throughout the day.)

Next I headed for Cars Land, and all the way to the back of the land to Radiator Springs Racers.  This ride features a single rider line, which I got in with only 5-6 people ahead of me.  (Disneyland has many more single-rider opportunities than the Florida parks, which is perfect for touring as a single.)  I was in line for less than 5 minutes, then on my way in perhaps the most immersive ride experience in the U.S. Disney parks.  This attraction is not-to-be-missed.  I would have liked to have ridden again, but this was a one-day tour and I had to move on. 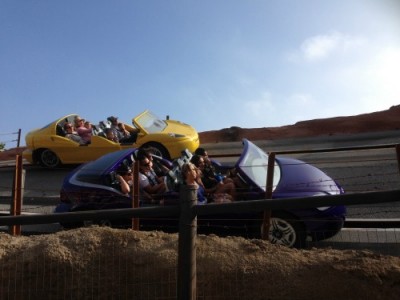 Next was Toy Story Midway Mania.  When I got there, there was already a 20-minute wait.  For Disney’s Hollywood Studios visitors, you would think that this was a short line!  However, the California version doesn’t seem to be as popular as it is in Florida even though it is the exact same ride.  This would turn out to be my longest wait of the day in Disney California Adventure.  This attraction is not FastPass-enabled, so getting here early is key to a shorter wait.

Follow Toy Story Mania, I went in this order to finish this part of my day in Disney’s California Adventure:

I was not interested in riding California Screamin’ in Paradise Pier, but it had a lengthy shutdown during my time in Disney California Adventure.  I then ate lunch at Flo’s V-8 Café in Cars Land, enjoying the ribs and mashed potatoes.  This is a counter service restaurant, which is well-themed with food that is “OK.”

After lunch, I exited the park, walked over the Esplanade to the entrance of Disneyland Park.  (I cannot say how easy it is to go from one park to another; park hopping is well worth it, as you can easily go back and forth all day.)  I took in the atmosphere on Main Street US.A., attempted to ride Pirates of the Caribbean in New Orleans Square (but the standby line was just too long), secured a FastPass for Big Thunder Mountain Railroad for later in the afternoon and a FastPass for Fantasmic!, then headed back to Disney California Adventure for the Aladdin stage show.  (This show is now closed to make way for the upcoming Frozen musical in that park, but it was probably the best stage show I’ve seen in all of the U.S. Disney parks.  Genie was a hoot, with up-to-the-minute references to pop culture and the flying carpet effects were awesome.)

After Aladdin, I headed back across the Esplanade at 2:00 p.m. to Disneyland to take in the rides and dinner.  Order of attractions visited included:

I headed back to Disney California Adventure for World of Color and did a little shopping along the way.  I got to my assigned World of Color FastPass area and waited about 45 minutes for the show, enjoying the sights and sounds of Paradise Pier.  World of Color itself is an excellent show, though I wished we didn’t have to hear the whole “Let It Go,” as it didn’t fit well with the flow up to that point.  The show also felt a bit out of sync toward the end with its promo for Star Wars: The Force Awakens prior to the finale.

I made a quick exit after World of Color to head back to Disneyland.  Upon entering Disneyland, I saw the end of the Disneyland Forever fireworks show from Town Square.  I missed my FastPass return time for Star Tours because of my long wait for Splash Mountain and the standby queue was too long, so I ended up not riding.  The Matterhorn also had a long wait, so I opted for a second ride on Big Thunder Mountain Railroad, which was great at night!  I then lined up for Fantasmic!, which has quite a few differences from the Hollywood Studios version with a brief Pinocchio sequence and a long Peter Pan sequence on the Sailing Ship Columbia.  Missing from the Disney’s Hollywood Studios version is the Pocahontas sequence (which is a good trade off for the swashbuckling Peter Pan).  After I left Fantasmic!, I saw the very end of the new Paint the Night parade.  I once again tried to ride the Matterhorn, but the line was still 45 minutes long and I was whooped.  I exited the park, took the tram back to the parking lot, and was on my way. 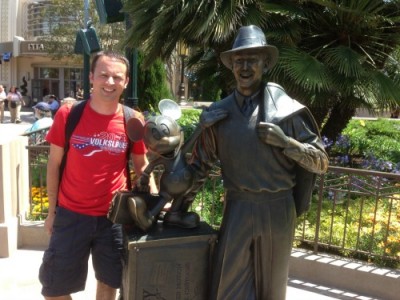 Touring both Disneyland Park and Disney’s California Adventure in one day is not for the faint of heart, and probably not for anyone with children in tow.  But for a Walt Disney World fan who has just a day to spare, this is well worth it.  Come with a plan to see the things that are different from Walt Disney World, see the nighttime spectaculars, use (and enjoy) the legacy FastPass system, and be flexible enough to change your mind at the last minute.  You won’t see everything in one day, but your visit will still be memorable.

What are your tips for only having one day to see both Disneyland and Disney California Adventure? Share in the comments.