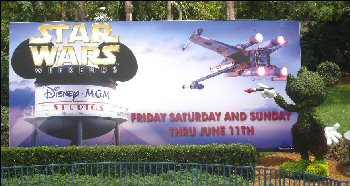 A LONG TIME AGO, IN A THEME PARK FAR, FAR AWAY, Walt Disney World Resort began an annual event which puts its guests in a direct line of contact with Sith, Ewoks, Stormtroopers and Wookies. Ok, so eight years isn’t THAT long ago and Orlando, Florida isn’t THAT far away, but the rest of the story is true!

Back in 2000, the first Star Wars Weekends were held at Disney-MGM Studios. The event ran for four consecutive weekends in May and each weekend was full of excitement for both the casual and the very serious Star Wars fan.

Studios will once again host Star Wars Weekends (#8). The first four Fridays, Saturdays and Sundays during June, the gates of Disney MGM Studios will be guarded like at no other time. Stormtroopers will lurk high above the park entrance, monitoring guests as they enter the park (bringing a whole new meaning to the term “bag check”!) You can expect to hear Star Wars music playing around the park, walk past Bounty Hunters and see Wookies posing for photos! It’s a Star Wars fan’s “Dream Come True” and if you’re a fan, you won’t want to miss it!

Perhaps it’s due to the 30th Anniversary Celebration of Star Wars, but for whatever reason, the 2007 guest line up is very impressive. There are celebrity guests from the entire Star Wars saga. The list, which is subject to change, is as follows:

Jay Laga’aia will be the event host for each weekend this year. Laga’aia is known as Captain Typho in both Attack of the Clones and Revenge of the Sith.

Although you’ll find it branching out to other areas in the park, the central point of Star Wars Weekends is the area around Star Tours. The stage and the huge event logo backdrop are set up next to the entrance of the popular ride. Taking place on this stage throughout the weekend will be events such as the Jedi Training Academy and the Hyperspace Hoopla.

How do you prepare yourself for spending the day with an Emperor, an Ewok or a Droid? Very carefully!  Here are a few helpful hints:

The 2007 Star Wars Weekends Events are:
Stars of the Saga – Star Wars celebrities will take part in talk show conversations and answer questions asked by the audience. This could be YOU, so have your questions ready. 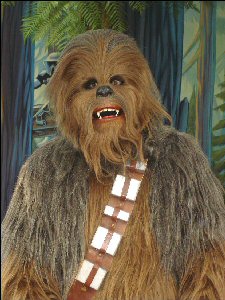 Jedi Training Academy – Does someone in your family dream of training with a Jedi Master? Well here’s their chance! Younger guests will be selected to test their skills against Darth Vader and Darth Maul. Arrive early. Being near the front and having your child outwardly showing their excitement will help increase their chance of being selected for training. (Sporting a Star Wars t-shirt won’t hurt their chances either!) (Star Tours stage)
Behind the Force – Get a behind-the-scenes peek at the making of the Star Wars films. This 20 minute, big-screen film shows George Lucas and his amazingly creative team as they make their way through the Star Wars saga. (ABC TV Theatre)
Padawan Mind Challenge – Guests 11 years old and younger should register at the Information Booth (across from Sounds Dangerous) at 9am. They will compete in a trivia challenge and could win Star Wars prizes. (Star Tours stage)
Legends of the Force – Star Wars characters and celebrities are featured in a daily motorcade, which travels from the entrance of the park to the event stage, located at the Star Tours attraction.
Star Tours – No Star Wars themed event would be complete without a trip to Endor in your very own Star-Speedster!
One-of-a-Kind Collectibles – Star Wars fans will find a galaxy full of one-of-a-kind, event-exclusive Star Wars memorabilia to choose from! Whether you collect pins, Disney character figures (wearing famous Star Wars costumes) or posters, there is limited edition event merchandise available for everyone.
Hyperspace Hoopla – Gather at the event stage each evening and join the Star Wars characters as the day winds down in a Hyperspace Hoopla of fun! (Star Tours stage)

As you can see, there’s something for everyone during Star Wars Weekends at Disney-MGM Studios. In addition to all of the Star Wars themed activities and events, be sure to remember that most of the park’s regular rides and attractions are open. If you need a break or have someone in your party that isn’t a big Star Wars fan (GASP!!), Disney-MGM Studios has plenty of other fun things to do. Have a great time and “MAY THE FORCE BE WITH YOU”! 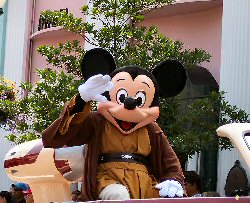