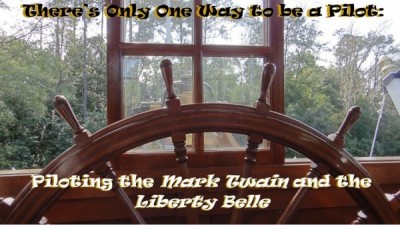 There’s only one way to be a pilot, and that is to get this entire river by heart.  You have to know it just like A B C. – Mark Twain, Life on the Mississippi

Secure all cargo, all passenger aboard.

Engine room, ahead on quarter.

~ the Captain, the Mark Twain, Disneyland 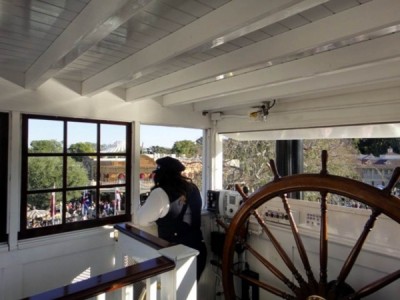 By the mark. Mark one.

There are many ways to travel the Rivers of America, but the way to travel in style is aboard the large paddle wheeler found on the river.  The Mark Twain and her sister, the Liberty Belle, are working reproductions of the workhorses of the old time Mississippi River. 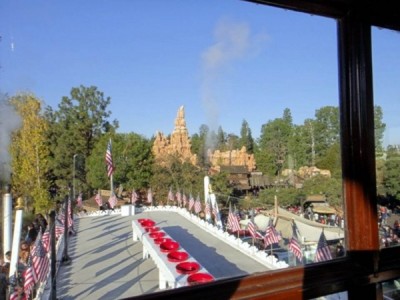 The storytelling on these riverboats immerses you in the lore and legends of that mighty river.  Your captain acting as guide, you roll along the Rivers of America, passing Native Americans, forts, islands, wildlife, and other river craft. It’s a relaxing few minutes in what can otherwise be a hectic day at Disney.  But these paddle wheelers offer a few lucky people another adventure – you can follow in the tracks of Samuel Clemens and pilot the riverboat as well.

The fine print first: There are several constraints to keep in mind before you decide if trying to experience this adventure is for you: 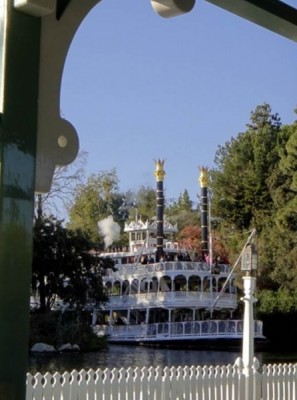 You will travel a half mile in 14 minutes on this journey under steam power from the stern paddle wheel.  The vessel is a 5/8th scale recreation of a 19th century sternwheeler found on the Mississippi River at the turn of the 20th century.  Because steam powered paddlewheels were no longer relied on for transit of wares and people, in 1954 when Walt Disney wanted to build the Mark Twain, he and his imagineers had to reimagine how to make this vessel. It had been over 50 years since the last paddlewheeler had been constructed in the US.  The Mark Twain is 105 feet long and 28 feet tall.  It can accommodate 300 guests on four decks (the Main Deck, the Promenade Deck, the Texas Deck, and the Pilothouse).  The riverboat was named after one of Walt Disney’s personal heroes, Samuel Clemens, who is better known by his pen name, Mark Twain.  The maiden voyage was on July 13, 1955 as part of Walt and Lillian Disney’s 30th wedding anniversary celebrations. 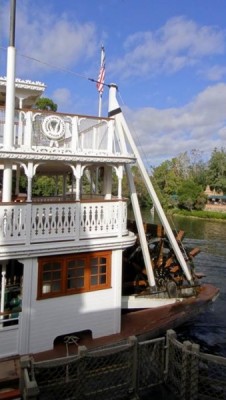 While on the Liberty Belle, you will travel a similar half mile in 17 minutes.  Like the Mark Twain, the Liberty Belle is a fully functional steam powered sternwheeler.  She is slightly larger than her sister being 113 feet long, 44 feet tall, and she can carry 450 guests.  She also has four decks.  She originally went into service as the Richard F. Irvine (named after one of the Disney executives) on  May 20, 1973 but was renamed the Liberty Belle in 1996 when she came back from a major refurbishment.  She was the second riverboat to cruise on the Walt Disney World Rivers of America.  The other riverboat, the Admiral Joe Fowler, is no longer active at Walt Disney World.

Once you know your vessel, you are ready to try your hand at piloting.  Firstly, you will need to get your party together.  As a unit, walk up to the Cast Member at the turnstile of the dock.  Ask nicely if they are taking guest pilots today and if it is possible for your group to participate.  This Cast Member will check with the pilot and let you know the availability.  You may be asked to wait for the next steaming or to come back at a different time of the day. Ultimately, it will come down to availability, weather, and the individual Cast Members.

So, you have been given permission to undertake your piloting training.  The Cast Member will tell you where to wait and where to meet the Captain.  Ultimately, you will end up on the top deck of the riverboat (the Texas Deck) at a door that says, ‘Private’ (Mark Twain) or ‘Captain’s Quarters: Cast Members Only’ (Liberty Belle).   Behind this door is the Captain’s personal quarters; this area includes some interesting art work.  Take a few minutes to have a look either on the way in or out.  Sadly, there is never enough time in this room to see everything as the boat must steam again soon.

Your next obstacle is a set of stairs.  They are steep and in the Mark Twain, they are lovingly called suicide stairs.  For those guests who find tight places and heights confronting, this may not be the experience for you. 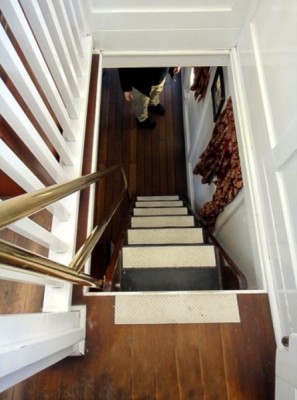 Once you make it up to the pilothouse, you will see the wheel, several pulls (for the whistle and the bell), one of the control panels, and a breathtaking view from the windows surrounding you.  The area is small but feels bigger because of those windows.  There is also a small table with a guest book.  Make sure to sign it and have a look back at the guests before you.  You never know whose signature you will find.

Now comes the fun part.  You have a Cast Member all to yourself.  Most are very knowledgeable and are happy to regale you with tales, answer questions, and act as a tour guide on the river for your time in the pilothouse.  You (or one of your party) may be asked to help out with the signals.  Sounding the steam powered whistle and ringing the bell are both novel experiences and bring smiles to faces. 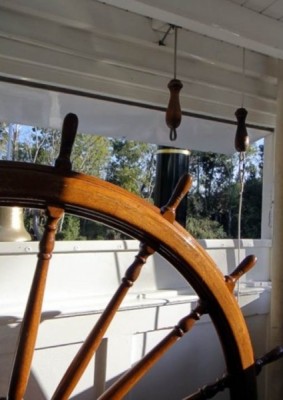 The pulls and wheel on the Mark Twain

Note: the whistle and bell are loud when you are on the decks or on the sidewalks beside the Rivers of America.  They are louder in the pilothouse. This is particularly important to remember if someone in your group is noise sensitive.  They must use the signals and you cannot leave the pilothouse while the vessel is moving.  So bring those noise cancelling headphones if you think that this will be a problem.

You can take over the wheel whenever you wish and often the youngest in your party will take the helm first.  Both vessels have steps to help smaller pilots see over the window ledge.  This helps them avoid steering the riverboat into the island. 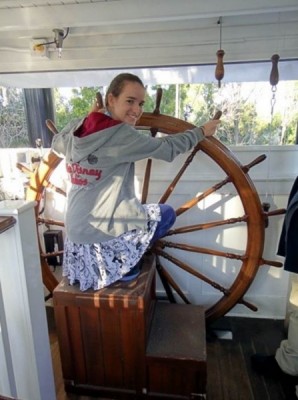 You will miss a few thing from your vantage point in the pilothouse.  You will find that you can hear the narration but that it is quiet and often drowned out completely by the chatter of the guests below, your conversation with the Captain, or the oohs and awes of your group.  With your less obstructed views, you will see some of the show buildings.  After all, the parks were designed and built with sightlines for the guests walking on the pathways, not standing some many feet above. 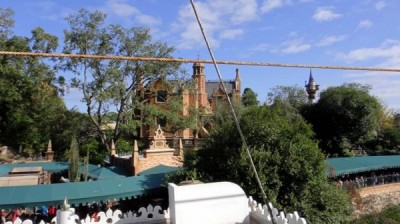 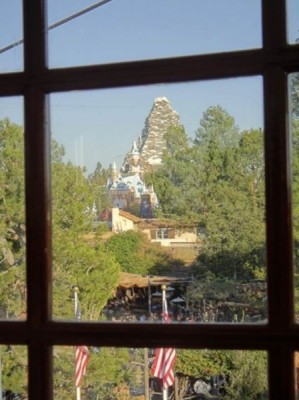 Spoiler Alert! (If you would like to keep some things a surprise, then this is where you should disembark.  If you are an inquiring mind, please continue.) 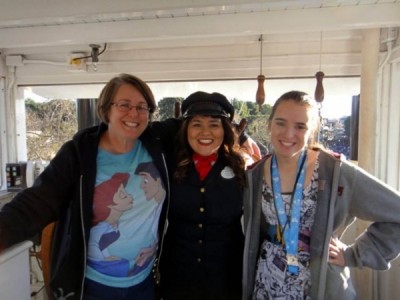 The riverboats really are propelled through the water using the steam powered wheels at the back of the boat.  The speed of the boat is controlled by the engineer who sits in the engine room (at the stern of the Main Deck).  The riverboats run on underwater rails that keep the vessel from running aground.  The wheel is only for looks, so feel free to turn it the opposite direction to your turn – though it is much more fun to pretend that you are actually directing the ship.  Why then do they have a captain in the pilothouse at all?  Well, although the riverboats have right of way on the water, the captain keeps a wary eye out for smaller craft that might not realize the larger vessels are there and moving.  They also keep an eye on the timing of the attraction and give all the important signals (saying ‘hi’ to the train, signalling departure, arrival, and midway points, and, most importantly, waving to the guests in New Orleans Square, Critter Country, Frontierland, and Liberty Square). 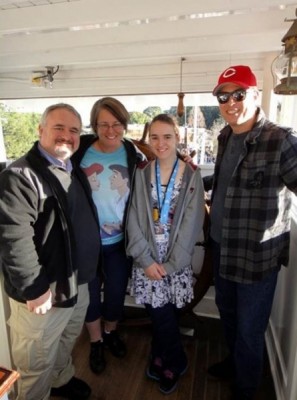 Your Captain will be happy to take photos of you and your group.  Be careful of those less dexterous in your party (small children, older members, the terminally clumsy) when taking photos.  It’s easy to find your way to the edge of the stairs.

One extra special souvenir that you may receive are the highly sought after ‘Pilot’s License’.  Do not be shy to ask for one each or one per family if your party is made up of multiple families.  Smiles and thank yous always follow. 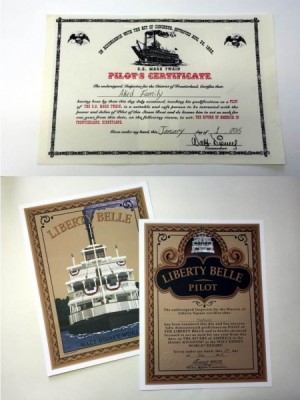 As you disembark after your adventure on the mighty Rivers of America, you will have a small understanding of just what it was like to be a pilot on the Mississippi and why Mark Twain fell in love with the river man’s way of life.

Notes regarding the breaks in this article:  These are the old river man calls for sounding the depth of the water.  Mark twain is the call for two fathoms (12 feet) and was clear water, deep enough for the riverboats to pass easily and safely.  The calls in this blog are from the casting off of the Mark Twain.

Have you ever piloted the Mark Twain or Liberty Belle? What were your experiences?