If any Disney World guests have not participated in The Sum of All Thrills at Walt Disney World, I suggest they check it out. Last September on my Disney vacation, my family and I visited Innoventions at EPCOT for the first time. In the east section, we discovered The Sum of All Thrills, a virtual, build-your-own roller coaster. With great excitement, I raced to the queue.

After waiting in the line for approximately fifteen minutes, a cast member handed my family and me small cards. Soon after, we were led with other guests into a room to watch a five minute clip. This educational video spoke about how roller coasters are designed and built, informing viewers how to build their own personal virtual attraction. Afterwards, we were released into another room to begin construction.

I worked alone, but guests may also work in pairs. At a touch-screen table, I scanned the card given to me earlier and was given several minutes to design either a roller coaster, a jet, or a bobsled. I selected a roller coaster. I then chose a track on which to ride, along with other twists and turns. As needed, I changed its height, speed, and width when applicable. After selecting the test button, I saw a small virtual robot named Crash experiment with my choices. If any were too fast, too high, or too long, he would crash, and I had to fix the problems.

After my ride had been created, I climbed steps into a fourth and final room where a cast member assigned me a locker in which to store all loose items during the ride. Next, my card was taken, and I was directed to a robotic arm in which I was seated.

In almost no time, my attraction began! A large, mask-like cover came down over both sides of the seat. I experienced an adventure on my self-designed track. I zoomed through a city as I fell down hills, flipped, and sped around sharp turns on the coaster I invented only minutes earlier. Sooner than I hoped, the ride concluded. However, I was excited when the cast member returned my card to me, explaining that I could ride again anytime I come back.

After our trip, when I was back at home, I went to the website www.mathmovesu.com, clicked on The Sum of All Thrills, and typed in the unique code from the back of my card. This allowed me to view the ride I had designed any time.

The Sum of All Thrills at Innoventions was an unexpected, but exciting surprise during our day at EPCOT. I only wish that the brief ride on the robotic arm was longer. Someday, I long to be a Disney Imagineer and design real roller coasters. This gave me a taste of what it will be like. I encourage all Epcot visitors to try it out. 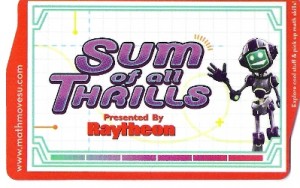