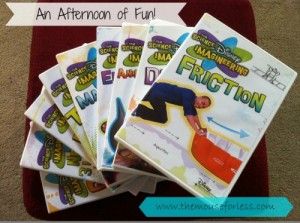 My family is a bunch of science geeks who would spend an entire afternoon watching The Science of Disney Imagineering DVDs.  That is if I would let them sit all afternoon and watch them.  I know I have mentioned these DVDs before, but I have a specific direction in mind with this.  Audio Animatronics.

This week, the Enchanted Tiki Room celebrates its 50th anniversary.  But Audio Animatronics have progressed so much further than birds and flowers singing and crooning.  The Science of Disney Imagineering shows us a little of the inner workings of Audio Animatronics, and it is neat to see what goes into making them all work. 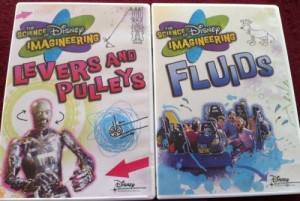 The two DVDs that talk about Audio Animatronics are Levers and Pulleys and Fluids.  Just a little spoiler alert…  If you don’t want to see the workings behind the magic, you might not want to watch these DVDs.  We like to watch them because it brings science to life every time we go to a Disney Park.

Let’s start with the definition of Audio Animatronic.  I didn’t really think about there being a definition until I watched Levers and Pulleys.

That really sounds complicated, doesn’t it? 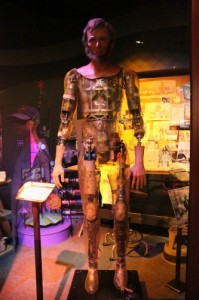 It looks complicated, too, when you look at what is under the skin, fur, or feathers of an Audio Animatronic.  However, while listening to the imagineers describe what is behind the movements, they almost make is sound easy.  Just a couple tidbits that I picked up from the Levers and Pulleys DVD…  The main use of the levers and pulleys in the Audio Animatronics is to transfer the “force” or power from the motors to the joints that are needed to move.  It was mentioned that sometimes the levers are used backwards to give more motion.

The Fluids DVD mentioned the Dinosaur attraction at Disney’s Animal Kingdom.  This DVD really blows me away with the numbers that are mentioned.  The imagineer talked about the hydraulics used to move the dinosaurs in the ride.  Because of the steel in the Audio Animatronics, there is a lot of force needed to move them.  One of the dinosaurs with a really long neck has six 1-inch diameter cylinders in the neck, and each of the cylinders puts out between 2,000 to 3,000 lbs. of force.  That is just mind-boggling, isn’t it?

There is so much that goes into these Audio Animatronics!  While the Tiki birds were the first so long ago, there are so many attractions now that use Audio Animatronics.  Think of Pirates of the Caribbean, Jungle Cruise, It’s Tough to Be a Bug, Hall of Presidents, and the American Adventure just to name a few.  Without the awesome science and foresight of Walt Disney, we would not have the fun and interactive attractions we have today.

My family has owned The Science of Disney Imagineering DVDs for quite some time, and they never seem to get old.  Each one covers a wide range of attractions, and we learn something new every time we watch them.  If you like to learn some of the information about the inner working of the attractions, I highly recommend these DVDs.  They are made for school-age children, but I find them fun as well.