I had the most amazing time during the Disney Princess ½ Marathon weekend!  If anyone had told me a year ago that I would have that much fun running 13.1 miles, I would have laughed in their face.  I never pictured myself EVER crossing the finish line after successfully completing a race.  While I was preparing, one relentless training session after another, people would ask how fast I was running and I would cringe because so many people I know are real runners.  You know the ones who log miles and miles every week and live from one race to the next?  Well, I knew that I was nowhere near their level and I was almost ashamed to admit how slow I was.  But then one day I had a personal revelation while running.  If I set it as my goal to simply finish the race while running more than walking, than I would be happy with whatever my finish time ended up being.  That lifted a huge weight off of my shoulders and from that point on when people asked my time, I would say “slow and steady, but I’m going to finish!”

I am going to write more in depth about the weekend later, but here are some highlights and race details.  We arrived on Thursday and checked into Port Orleans French Quarter, one of the official race resorts that weekend.  There were six of us together, four from Houston and two friends from the D.C. area.  I had the weekend all planned out, ADRs made, park tickets in hand, and racing on the mind.  Our first magical moment of the weekend was seeing the space shuttle fly overhead while we sitting out by the pool.  I had never seen that before and it was quite impressive.  For our arrival night dinner I had booked ‘Ohana’s which truly is as good as everyone has said it is.

We went to the Race Expo on Friday where I got to see my hero, Jeff Galloway.

I listened to him talk for a few minutes, but it was really just a repeat of the videos on the internet so we moved on to check out the vendors and purchase our official Disney Princess ½ Marathon gear.  We spent the afternoon wandering around Epcot and went to Magic Kingdom on Saturday.  It was nice to spend time together and relax before the race.

On Sunday morning we were up at 3:30am, yes you read that correctly!  The last bus was to leave the resort at 4am and we wanted to be sure we didn’t miss it.  It was still dark when the bus dropped us off in the Epcot parking lot.  We checked our bags at the bag check and began the walk to the start corrals.  I was kind of surprised to see that it really did take about 20 minutes to walk to the starting point.

We had been advised that it would take awhile, but I didn’t really believe it could take that long.  The walk was good though because it warmed up our muscles and by the time we were in the corral we were ready to go.  Just a side note here.  Disney is very serious about their start corral assignments.  One of my friends put a much slower finish time than the rest of us and as a result she was assigned two corrals behind us.  We thought that maybe we could just sneak her up with us.  You cannot get away with that.  Faster runners may move back, but slower runners may not move up and they check and recheck very carefully.  I saw a few people removed from the corral before we started for sneaking in.  So we were split up right at the beginning.  Four of us stayed in Corral C and the other two moved back to Corral E since they were walking together and not planning on running.  Each start corral had their own fireworks and official start which was nice.

The entertainment along the way was good, but not quite what I was hoping for.  I was hoping for more distraction, especially in the later miles, but there wasn’t as much as I thought there might be.  Running through the castle was awesome, I loved the energy of the people cheering us on as we ran down Main Street.  It was truly magical as only Disney can be.

Mile 11 was the worst.  I was sore and tired and just wanted it to be over when we had to run UP a slanted exit ramp, off of a 4 lane highway and onto an overpass to head into Epcot.  I wish I would have taken a picture of the people behind me while I was on the overpass.  It was amazing to see thousands of people running on the highway!

As we entered Epcot, my cousin (and running buddy) suggested that we “finish strong” so we kicked it in gear and ran as fast as we possibly could that last mile.  People were crowded  along the sidelines cheering us on and the thought of the finish line so close really motivated me to keep running.  I was ecstatic to cross the finish line because I knew that I had earned my princess medal!  It was the best feeling in the world to know that I had accomplished my goal!

My official chip finish time according to Disney is 2:40:17.  I was the 5,738th to cross the finish line which sounds horrible until you realize that there were 13,107 people in the race!  I was better than half the people there that morning and I am quite pleased with those results considering that was my first race ever!

I can’t say that I am hooked on racing.  I had a blast and I would love to run the Princess ½ again, but in the meantime I think I am going to stick with shorter races with my focus being on 10Ks.  Thirteen miles is a long way to run and quite frankly I find the training boring.  I don’t love running that far on a regular basis, but I think for a trip to Disney World I would do just about anything!  So after eight or nine months of careful planning and training my race is over.  It is a bit of a letdown that it is all over.  I miss the anticipation of the weekend, of the race itself, although not the training.  Regardless I think I may to do it again! 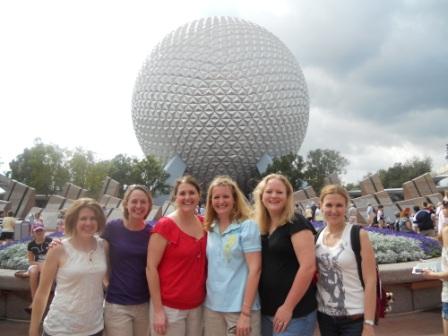