For years, Star Tours in Hollywood Studios has been an amusing ride for my family and me, but one we visit only once or twice a trip. However, on my most recent Disney World vacation, we discovered that the Star Wars themed attraction had been updated with renovations to the queue line, a greater tilt for the ship, and realistic 3-D effects in the movie. Furthermore, according to a cast member, eleven different scenes forming over fifty suspenseful combinations make practically every ride unique for its passengers. Fun and exciting, these changes improve the ride.

At the beginning section, the queue line causes visitors to feel like they are on the planet of Endor. Guests walk through the forest, seeing Ewok treehouses and homes and enemy speeder bikes. This is a big change from the rather plain outdoor segment of the original queue. Much to my pleasure, the huge Imperial Walker outside the attraction still stands boastfully at the edge of the forest.

Eventually, the queue leads to a Republic base. Near the beginning, guests spot a life-size model of the actual ship that they will soon board. In the top of it is R2-D2. Up and to the left, on a small, fenced-in platform, stands his best friend, C-3PO, who talks to the people waiting in the line. Later in the queue, a security camera shows live images of guests as they pass. A similar effect is shown later when guests’ images on a wall are scanned like a real security unit would examine them. 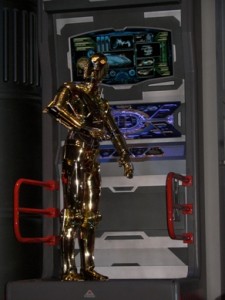 When the end of the queue is reached, passengers finally board their ship, the Starspeeder 1000. Inside the ship, an animatronic C-3PO speaks to riders and instructs them to put on their flight goggles (3-D glasses). Suddenly, the ship speedily blasts off without its pilot, leaving the novice droid to nervously captain the vehicle on the secret mission.

Unlike the old version, this attraction allows guests to feel like they are taking part in the mission, not accidently flying around a battlefield like in the first Star Tours. One way Imagineers accomplish this is by having a hologram of Master Yoda inform passengers that a Rebel spy is on board their cruiser. It then humorously shows an image of a Disney World guest who is currently on board the Starspeeder 1000. This “spy” must be returned unharmed to the primary Rebel base.

During the 3-D mission, the new recruits fly through battlegrounds, zoom side by side with speeder bikes on Endor and pod racers on Tatooine, dodge legs of Imperial Walkers with Snowspeeders on Hoth, blast enemy TIE fighters out of the sky in a space battle, and avoid sea monsters underwater at Naboo’s lowest point, all while outrunning the famous bounty hunter Boba Fett, who is hired by Darth Vader to eliminate the spy. After the ride is over, the passengers exit into the gift shop.

The new and improved Star Tours is much better than the original. Now, with all the ride combinations, repetition is rare for one family on a single vacation. My mom, who used to hesitantly ride it only once due to nausea from the simulator, is eager to ride this attraction over and over just like the rest of us. Also, for fans of thrill rides, the ship’s increased tilt makes it feel more like turning in a real vessel; but for guests who prefer tamer attractions, it is not unsettling. The new and improved Star Tours is a must do for all Hollywood Studios’ guests.