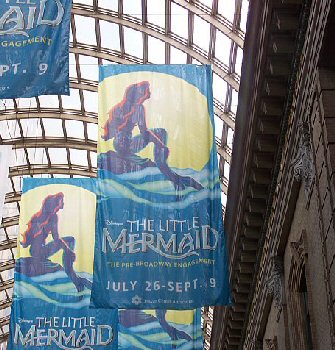 I love living in Denver, Colorado! Denver was chosen as the perfect place for The Little Mermaid to make its pre-Broadway run this summer. This isn’t the first time the Denver Center Performing Arts Complex (DCPAC) and the folks at the Walt Disney Company have teamed up. The Lion King made its touring debut five years ago at the DCPAC and had a return engagement last fall. I have been lucky enough to see performances of all of them.

The Little Mermaid has never been my family’s favorite Disney movie and Ariel is definitely not our favorite princess, but my girls and I loved the stage version of The Lion King so much that when we knew The Little Mermaid was coming to town, we snatched up tickets. So after six months of anticipation, we headed off to a Sunday matinee with Ariel and friends.

A little background on the venue: the newly renovated Ellie Caulkins Theater serves as the home to the Denver ballet and opera companies in the fall and winter months and there isn’t a horrible seat in the house. This was one of the most highly attended events at the Theater, with almost 95,000 tickets sold for 47 performances.

We had some not-so-good seats (we didn’t splurge on the tickets), but that didn’t dampen our enthusiasm for being at the theater. The staging of the show was such that we only missed a little bit of the action that happened at the very tip-top of the scenery. It is a wonderful bit of staging that makes you forget you are on land and not under the sea.

After seeing the show, I am going to have to agree with a lot of the reviews I have read: the costumes need retooling and I especially did not like the way the mermaids and Flounder “swam” around on rollarblades, but I am also not a big fan of wheeled footwear. One costume that doesn’t need reworking is Ursula’s – it is absolutely amazing! Sherrie Rene Scott plays up the role of Ursula so magnificently that the audience loves to hate her. In her Broadway debut, Denver native Sierra Boggess has been perfectly cast as Ariel. Sierra’s voice gave us goosebumps a couple of times when she was singing. The young man who played Flounder for our performance, Cody Hanford, stole every scene he was in despite his costume. Flotsam & Jetsam are given bigger roles in the stage version, and the gentlemen who play them should get Tony Awards for best supporting fish; they cracked me up! I see a lot of Tony Awards for acting in the future for this cast. Absolutely marvelous!

As with most shows there have been revisions and additions made to the story and music and for the most part they make sense. Our favorite song, “Positoovity,” begins the second act and is sung by the seagulls. I love this song, it just didn’t make a lot of sense in relation to the story. The second act also has a song in it that sounds an awful lot like “Be Our Guest” from Beauty and the Beast. These “mishaps” didn’t stop us from preordering the cast CD. I won’t reveal the story revisions – I want you to be able to experience the ahamoments I did.

Overall, when this opens on Broadway later this season it will be to packed houses because it is a Disney production. Hopefully the little kinks will be worked out, but even if they aren’t, you all are in for a magnificent night on the town. The Little Mermaid is full of brilliant acting, goosebump-inducing singing and giggles.

The Denver production of The Little Mermaid ended September 9th. It will begin previews November 3rd and opens December 6th at the Lunt-Fontanne Theatre in New York City. More information about the Broadway production can be found athttp://disney.go.com/theatre/thelittlemermaid/.