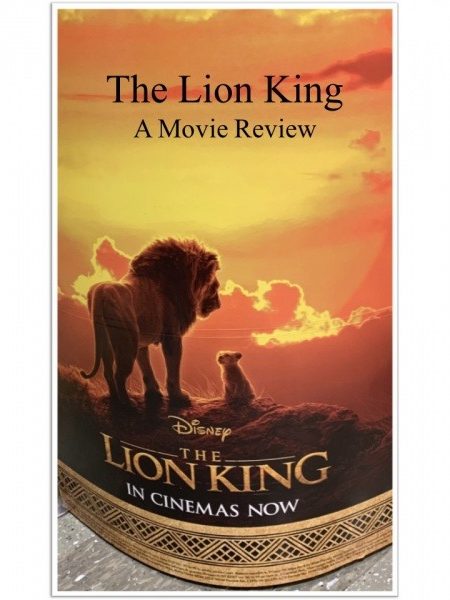 It’s 1994, I am sitting in a movie theater waiting for the feature to start. Honestly, I don’t recall what I was actually there to see. I do remember the lights dimming, the room in blackness, the breaking dawn, and the clear note “Na…”. The full sound of a chorus, in a language I didn’t know, drew me into the visuals of an animal prince. I knew I needed to see The Lion King. It was an invocation of life.

Fast forward to today. I sit in a darkened theater and wait to hear that clean clear note of a new generation of the classic The Lion King.

Already there are so many reviews about this new (2019) feature. Most I have read are fairly negative. I was excited when I first found out that Disney was doing a remake of The Lion King. Especially with a more natural look. But others who have seen the show in advance of me suggested that the animation was poor and that the animals lack life. The music at once both lifeless and generic, or innovative and intelligent. I sit and wait; I wonder what I have gotten myself into.

At least with the original The Lion King I knew that I was heading into the new era of outstanding Disney Features. The lights out, the audience settled, the dawn of a new interpretation of this classic begins.

What follows is a spoiler free look at this movie – well, in that I will not be giving anything away if you have seen the 1994 version of the movie.

People criticize this new version for being a beat for beat remake. I would disagree with this assessment. Yes, it is the same story. Yes, we have the same characters doing similar action as in the original The Lion King; but there is something more. So, here’s what I loved about the new movie.

The characterization is more solid and those characters that were flat in the 1994 version have been given a backstory that helps to develop them and to make it more relatable as to why they act the way they do.

The visuals are stunning. That goes for the animal animation as well. Okay, yes, some of the behavior and movement issues from the other, negative reviews do rear up in this movie. But The Lion King would lose its charm if all the animals fled in the sight of the lions. And to those who badger about Pumba’s walk, have you seen a warthog in the flesh?

There are differences and beat changes in the new movie. I think that they strengthen the feature and, especially, the character of Nala.

The new musical arrangements are often better, in my opinion, than the 1994 The Lion King soundtrack. The new song compliments the movie.

I feel that I must address one negative comment about this film head on. There is the feeling that the new animated animals lack emotion. In my professional life, I was a wild animal trainer. As a side note, I worked at one of the very places Disney sent their animators of the 1994 version to get close up visuals of the animals in the film.

I absolutely love the animation of the animals. Animals don’t emote like humans do. Rather than taking the emotional cues just on the face of the animals, the animators of the new version of The Lion King used the whole animal. I found that this enhanced the emotion of the piece rather than detracting from it. Some of the younger members of our audience recoiled from Scar and the hyenas and laughed at the antics of our heroes based on those physical, full-body emotional tells.

Brass Tacks Time: Should you go see this movie or wait until it’s out on streaming services?

The Lion King (2019) clocks in at just under 2 hours. I used to suggest that this might be a bit long for younger children; however, as movie times have increased, you will know if your little ones can make it through a movie that long.

This film is rated PG for violence and peril (yes, ‘that’ scene is still in there) and for some of the thematic effects in the film. Sensitive children, those prone to having issues with sudden, loud noises, or children who have recently lost someone close to their heart, might find this a very challenging experience. Be prepared for lap sitting and with tissues. It is The Lion King after all.

The new version of this movie is quite lifelike. If you have a child that you would like to take who falls into the above group, it might be better to take them to a cinema offering ‘aware’ showings – where the lights are left on but lowered and the sound is turned down.

Ultimately, The Lion King is a very fun, relatable film. It retains the heartwarming, tear inducing story of the original.

Have you seen the “live action” version of The Lion King? What did you think? Let us know your thoughts in the comments, or on Facebook or Twitter!