By Kate Abbott (photos by Kate and Brad Abbott) 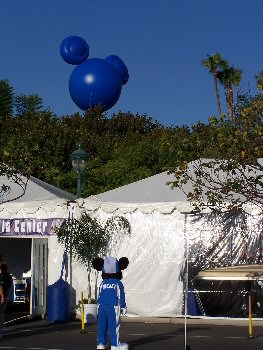 The love of Disneyland motivates me to do crazy things, like having an annual pass even though I live 400 miles away, or buying anything with a Tiki Room logo. But I don’t think I’ve ever felt the depths of my commitment to Disneyland more than by getting out of my comfy hotel bed at 5 a.m. to run in a race through the parks; my least favorite class was always P. E. and I fudged the corners while running laps. The only way I’d ever sign up for an event with “5K” or “run” in its name was if it meant I’d have the chance to do what I’ve always wanted: to charge full-speed down Main Street, headed toward the castle. And that’s exactly what I got to do! 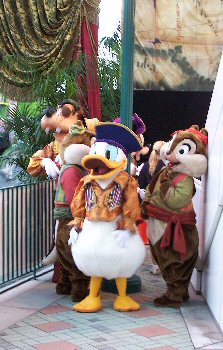 Pirate Donald and others wait for the 5K to begin.

Three thousand people signed up for the sold-out 5K, and I was sure all of them were going to be super athletes who were using the race as a warm-up for their half-marathons the next day. So I was relieved when I peeked down at the tram loading area from the parking structure’s escalators to see a crowd of mostly typical Disneyland guests—albeit some wearing less clothing than usual—clustered behind a festive Pirates of the Caribbean–themed starting line, which was surrounded by Mickey, Minnie, Donald, Goofy, Chip, and Dale, wearing dashing pirate attire. I knew when I saw Donald Duck shaking his tail to the blasting dance music being played by a nearby DJ that this was an unusual Disneyland morning—but one I was glad I was part of. 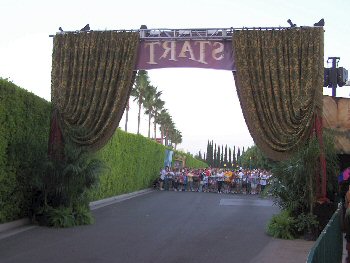 I headed down the tram loading area to the back of the pack, since the thought of getting passed up by little kids was triggering too many gym-class flashbacks. The race began at 7 a.m., with a shot of confetti at the starting line and the characters giving high-fives to the racers as they dashed by. I was told that even though we were expected to keep a 15-minute-per-mile pace, we wouldn’t actually be timed, but I made sure to check my José Carioca watch as I crossed the line at 7:07 a.m.

The fast racers at the front of the pack were already long gone, and I wanted to get moving myself, but the crowd slowly squeezed through the tram route toward Disneyland. As we reached the tram unloading area, I realized I wasn’t walking faster than my normal going-to-the-entrance-plaza speed-walk. I felt my first real thrill of the race when we all rushed through the bag-check area—hey, that’s a first!

I maneuvered around in the pack until I found room to trot toward the Main Gate, then jogged underneath the left entrance tunnel and was greeted by the Disneyland marching band, playing just for us on an otherwise empty Main Street. As I rounded the corner of the Emporium and saw the castle, I took off. And for once, I wasn’t tired of running yet!

The route curved into Adventureland, and I ran past the Tiki Room’s quiet garden. (I guess no one had woken up José yet.) I waved at Aladdin and his friends, who encouraged us from the roof of Tropical Imports, and headed toward Pirates of the Caribbean, where Captain Jack greeted us, perched atop the bridge. A group of four women in front of me bolted toward him. I slowed down to watch one climb up the handrail to hug him, and I could still hear their giggles as I rounded the bend and headed toward Frontierland. A crew of pirates and sailors shouted encouragement at us from aboard the Columbia, docked at the edge of the Rivers of America. The crew must have been firing off cannon blasts to get us moving, since I heard loud booms after I ran past.

We headed back toward Main Street, where we looped around the hub and got to run over the drawbridge, through Sleeping Beauty Castle and into Fantasyland. The 5K route’s map did not have the race going through the castle at all, much to my disappointment, so it was a tremendous thrill to get to do it—with Princess Aurora, Prince Phillip, and Flora, Fauna, and Merriweather waving at us from the castle balcony above!

We emerged into an empty Fantasyland, with the Carrousel running and Dumbos flying empty. It was surreal, but the best was yet to come: We ran toward Big Thunder Ranch and headed backstage! The wooden gate that I’ve tried to peek behind many times had vanished—and we headed into a large tunnel that lead to behind-the-scenes Fantasyland. I slowed down to have a look at the buildings, some custodial supplies—and the Storybook Land canal boats, all lined up. Finally, I got to see inside that waterfall-covered cave that was always so mysterious to me when I was little.

I’m not sure where we popped back out into the park again (I was too busy mentally kicking myself for not bringing my camera—I had assumed I’d be too busy trying to catch my breath to take pictures), but we headed through Toontown, where Daisy and an especially enthusiastic cast member greeted us all. My energy lapsed as we headed around the Matterhorn and into Tomorrowland, but some rambunctious Green Army Men made me zip by. The reward: another backstage treat, where we saw some cast buildings and were greeted by waving cast members as we shuffled along behind what I think was the Pizza Port and Space Mountain.

Volunteers handed us water in the esplanade, and we ventured into California Adventure. Having left Disneyland, I lost some motivation near the Condor Flats area, but I was perked up by seeing the giant Mater and Lightning McQueen cars hiding out by Pizza-Oom-Mow-Mow. We made another backstage detour near California Screamin’, and I was busy admiring all the potted plants when I realized we were almost done! A group of enthusiastic cast members reminded us that we were almost there and I trotted through the Hollywood Studios backlot, where I waved to Donald at the finish line (crossed at 7:51 a.m.). Kids’ races and a diaper dash followed the 5K, but I was only thinking of plopping down with my Pirates-themed medal (OK, it was made of rubber, but I think that still counts as a medal) and my free bottle of water. After I had cooled down, I realized that I had just done a 5K, it wasn’t even 8 o’clock yet—and I was still smiling. I don’t think that could have happened anywhere but the Happiest Place on Earth. 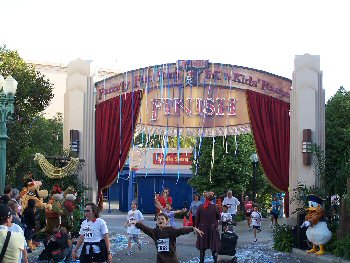 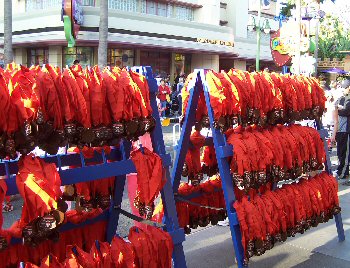 The medals to be given out after the 5K.

After the 5K, we spent the rest of Saturday enjoying the parks, although we left much earlier than usual. (I still watched the fireworks from our hotel room window, though.) I was even more reluctant to drag myself out of bed on Sunday morning, but it was finally half-marathon day, and I was looking forward to cheering for my husband Brad and all the other racers from the sidelines.

The 5K was a big deal to me, but I really had to admire those half-marathon participants who were supposed to arrive at the Lilo parking lot by 4:30 on Sunday morning. Because the half-marathoners would be running through the streets of Anaheim, to the Pond and Angel Stadium, streets were closing, which meant I hopped on my “Good Neighbor” hotel’s free shuttle to the parking structure before the last departure time at 5:15 a.m. I got an energy boost from absorbing the excitement of the thousands of people huddled in the Lilo parking lot, which was a blur of lights, a very perky announcer, music, a giant TV screen, and rows and rows of Porta-Potties. My husband told me that they were also being “motivated” by some enthusiastic Green Army Men barking orders for everyone to do jumping jacks. 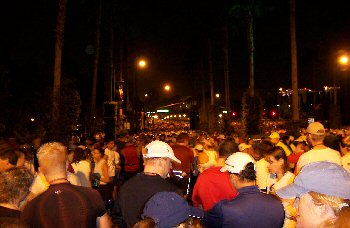 Thousands of half-marathoners wait very early in the morning for the race to begin.

From my spot underneath the bridge on Disneyland Drive, near the starting line, I watched racers take short runs up and down the street to warm up. I snuggled into my sweatshirt and was glad I got to relax, but I got excited as I caught a glimpse of a darkened Monorail—which wasn’t currently operating in the park, due to the construction of the new Finding Nemo Submarine ride—creep up and wait off to the side. 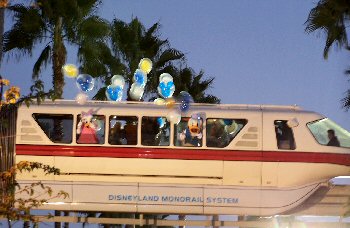 Characters send off the runners from the monorail.

As the 6 a.m. start time approached, the Monorail pulled up above the crowd, and the bright lights revealed it was full of Disney characters from Alice to Goofy, holding balloons and waving at the thousands of participants (the race sold out with 12,000 people signed up). Husband Brad, who was in Corral C, couldn’t see much of the festivities, but I think he was too anxious about crossing the finish line to mind. The half-marathoners had to maintain a 16-minute-per-mile pace to receive a medal, and he wasn’t sure if he could do it for all 13.1 miles, since he’d never been in a half-marathon before. With a blast of fireworks, the race began—first with the wheelchair athletes, then the rest of the crowd. 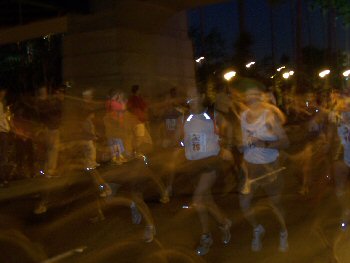 An early start to the half-marathon.

Costumed runners made the spectacle even more fun for the spectators. My favorites were the Mickey and Minnie couples, the Snow Whites, the Tinkerbells (male and female), and the guy wearing a giant banana costume, shaking maracas as he ran (I’m pretty sure there was only one of him).

Brad told me later that the beginning of the race passed quickly, as they headed around the outside of California Adventure, through the park and then Disneyland. 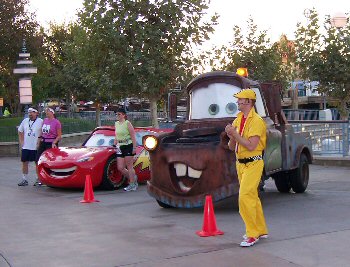 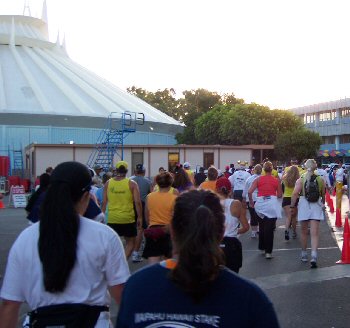 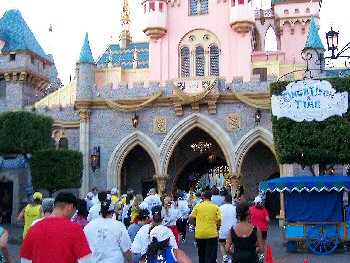 The half-marathon racers went through the back of Sleeping Beauty Castle, heading toward Main Street.

Past mile 5, racing through the streets of Anaheim, the parks’ energy was wearing off, but the community turned out to motivate the half-marathoners: school bands and multicultural performers motivated the racers as they went through neighborhoods. The race picked up as they traveled around the Pond and through Angel Stadium (on the warning track around the field). Finally, the half-marathoners ended near ESPN Zone in Downtown Disney. 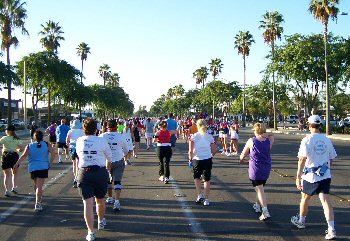 Running through the streets of Anaheim. 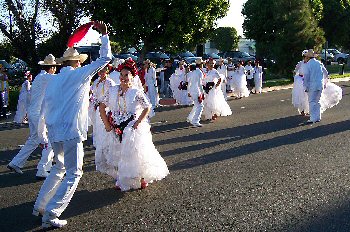 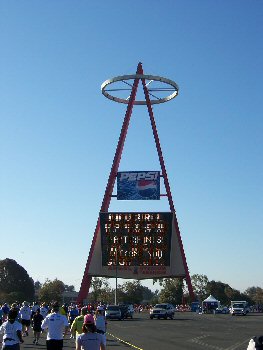 I had signed up to get cell-phone updates on my racer as he crossed certain points, but for whatever reason, they didn’t come through. In the end, I was glad to watch everyone pass by. Although I saw the serious runners, I also saw a lot of people who weren’t elite athletes—but who definitely looked like they were having a great time. Maybe it was the lack of sleep, the awesome gold Sleeping Beauty Castle medals awarded to the finishers, or some pixie dust in the air, but as I watched everyone from teenagers through seniors head through Downtown Disney toward the finish line, I actually started thinking, “Maybe next year.” Now that is some Disney magic. 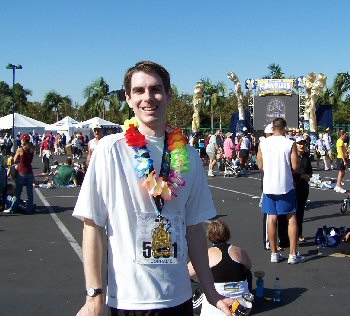 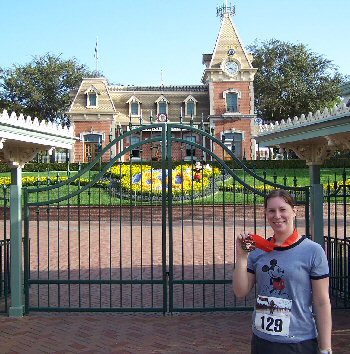