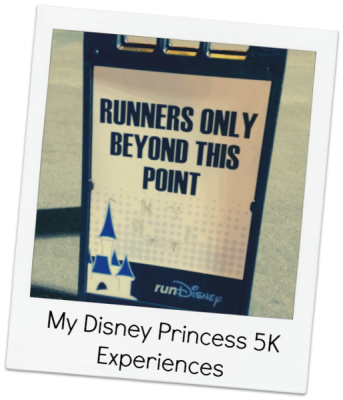 The Disney Princess Half Marathon Weekend came to the Walt Disney World Resort February 18-21st, and I was lucky enough to attend! I checked out the runDisney Health & Fitness Expo, ran the Disney Princess 5K, and did a little bit of cheering at the Half Marathon; and I managed to squeeze some great park-hopping in, too. Here is my rundown of the Half Marathon Weekend!
The runDisney Health & Fitness Expo
I arrived in Orlando late Wednesday night and headed straight to the Expo for packet pick-up on Thursday morning. The Expo is located at the ESPN Wide World of Sports Complex; every runner is expected to come pick up their bib, t-shirt, gEAR bag, and race information packet prior to their race, and I was so excited to go grab mine! 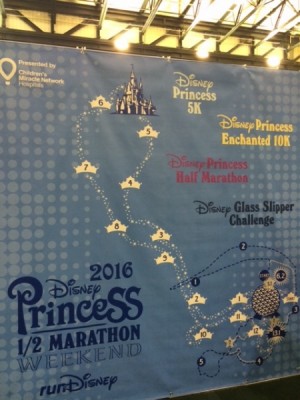 After picking up my bib, packet, and limited edition pin, I headed straight to the Expo to check out the merchandise! The crowds weren’t too bad, so we took our time and browsed all of the kiosks at the Expo. There were so many great items available for purchase, from shirts to mugs to compression socks! And there were plenty of freebies to be had, too! I got some free jasmine rice, hair ties, Luna bars, temporary tattoos, and all sorts of little goodies. Jeff Galloway attended the Expo, too, and was available for autographs! 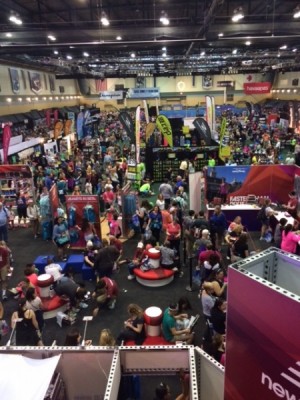 I vowed to save my money when I arrived at the Expo, but I had to cave and buy this awesome top from Raw Threads! They had so many cute items, I’m impressed with myself for being able to stop at one! 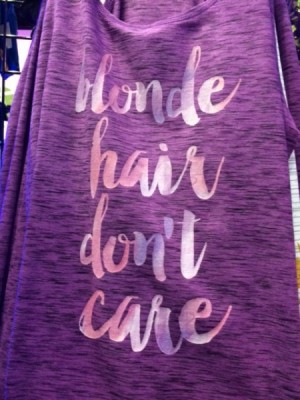 After the Expo, we headed to the Magic Kingdom to get a few attractions in. We stayed in the parks for a few hours, then headed home to rest up for the big day, knowing our alarm clocks would be set for 3:45 a.m.!
The Disney Princess 5K Pre-Race Activities
So, setting your alarm at 3:45 a.m. is never fun, but getting up and putting on a tutu and crown really helps to dull the pain! After all, how many opportunities to wear a tutu does a 25-year-old really have? I woke up, somehow managed to drag myself out of bed, threw on my exercise clothes, pinned on my bib, and hit the road, with a bag of dry cereal in hand. We were on the road from Celebration, FL to Epcot by 4:02 a.m., arriving at Epcot at 4:12 a.m., to be exact! We’d read about traffic on race day, so we wanted to make sure we had plenty of time to arrive and get situated, but it was a breeze, so we were really early!
The pre-race activities were almost as much fun as the race, itself. Almost everybody comes decked out in some type of costume, so people-watching alone is a blast. Lots of photo opportunities are available, too. Ariel and Prince Eric showed up early to greet runners (though the line was really long), and Sebastian was available for photos, too. Luckily, I brought my own personal photographer (my dad!), so I was able to get lots of great pictures! A DJ was playing music nice and loud to help wake everybody up, and thank goodness, coffee was available for purchase! There was also a gEAR bag drop off station, if you didn’t feel like carrying something on your run. 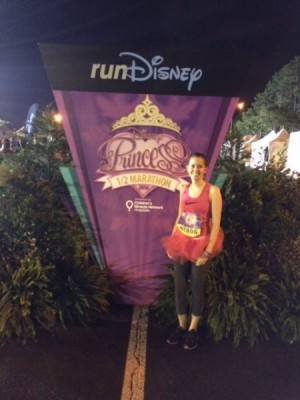 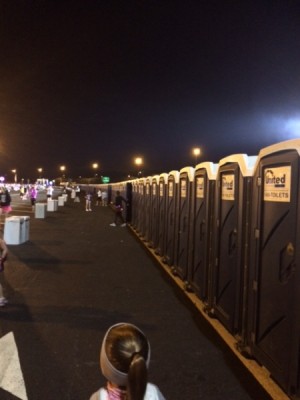 It was about 54 degrees out when we arrived, so we did a lot of walking around to try and keep warm. Tons of restroom opportunities and water stations were available, too! We were allowed to head to our corrals at 5:00 a.m., so we made our way to Corral B! At this point in time, cars were really starting to pour in, so we were happy to have made it early to avoid the rush. The next hour flew by; the DJ was nice and loud, pumping up the crowd and keeping everybody entertained. 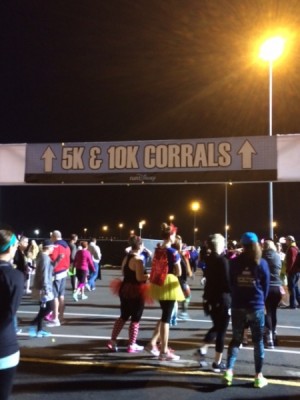 Race Time!
At 6:00 a.m. on the nose, Corral A headed across the start line with a bang (literally; there were fireworks!). Our corral was up next, so they lead us closer to the start line, where a little pre-show entertainment kept us busy. We played “guess that song” and did some Little Mermaid trivia until it was our time to go. At this point, I was wide awake and so excited to hit the road! 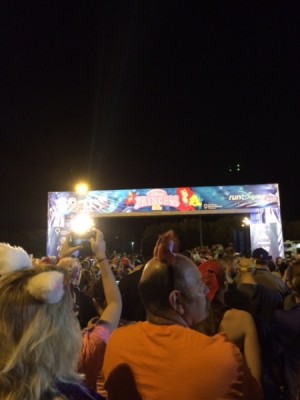 The 5K route is exclusively through Epcot. We started in the Wonder parking lot, and logged our first mile in the lot before heading back stage and entering the World Showcase through the Mexico pavilion. I was blown away when we hit the World Showcase; it was still dark out, and all of the buildings were lit up with pink, sparkly light! Music was playing all along the course, which really helped to keep the energy up. Quite a few character meet and greets were available, too, including Surfer Goofy, Chip & Dale, a gigantic light-up crab, the Genie, and some fish. The lines were long, so we skipped most of the photo opportunities, but managed to snag a picture with the fish with no line. 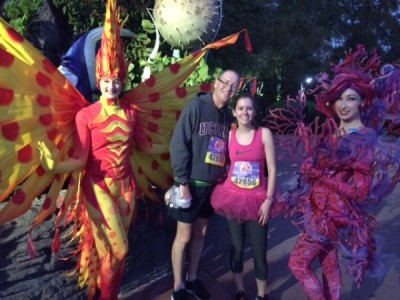 The race was truly a fun run; nobody seemed to be in a terrible rush, and many people pulled over to occasionally take a picture (myself included!). Once we started to run, the temperature was just about perfect, too. I was able to ditch my sweatshirt and still feel comfortable. My only complaint was that 3.1 miles was far too short. The experience ended too quickly! Even after a 5-10 minute delay waiting for Corral A, a slow, crowded start, and a very casual pace (stopping for pictures, taking in the scenery), we were done by 6:45 a.m. I think the 10K is next on my list. 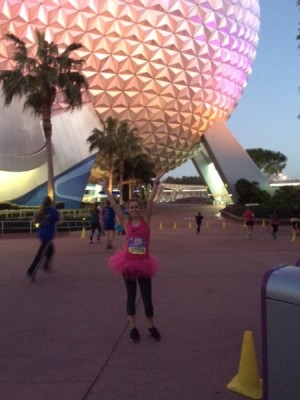 After the Finish Line
Once we crossed the finish line, we headed over to grab our medal. We were then able to stop for a couple of photos, too. Volunteers gave us blankets, water or PowerAde, a banana, and great little snack boxes. Once we collected our gear, we headed for the car. We were back to Celebration at 7:15 a.m. (after making a coffee stop and forgetting where we parked at Epcot!). 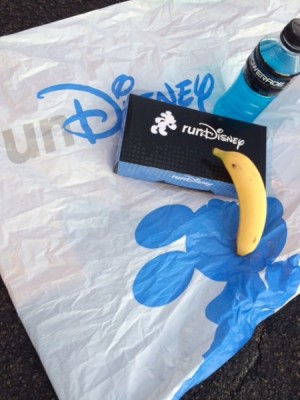 Though we were exhausted by around 3:00 p.m., we were able to head to the Pepper Market at Coronado Springs for breakfast and pack in a bunch of attractions at Epcot! The race ends early enough that you still have your whole day ahead of you.
My Final Thoughts
I would run this race again in a heartbeat; if possible, I would have looped back around and run it twice in a row! The Disney Princess 5K was an absolute blast, and my only downside was that it went by so quickly! I will definitely try to get signed up for the 10K next year. It sold out too quickly this year, so I was unable to get in, but the 5K was an amazing experience that I’ll never forget.
Have you run the Disney Princess 5K? What were your thoughts or tips? Share in the comments!