Editor’s note: The following article is written by Ric Flack, one of The Mouse for Less ImaginEARs, about his experience riding out a hurricane while at Disney World. I would like to convey that caution should always be used when making a decision on whether to weather a hurricane or not. While Disney World Resort had very little damage and was functioning in moderation following each of the hurricanes in 2004, not all of the Orlando metro area was. The airport closed several times, rental cars were difficult to find and there were road closings on many of the north-south interstates because of damage. These are things to consider when deciding to ride out a storm. As you will see from Ric’s article, while survivable, storms aren’t always convenient. 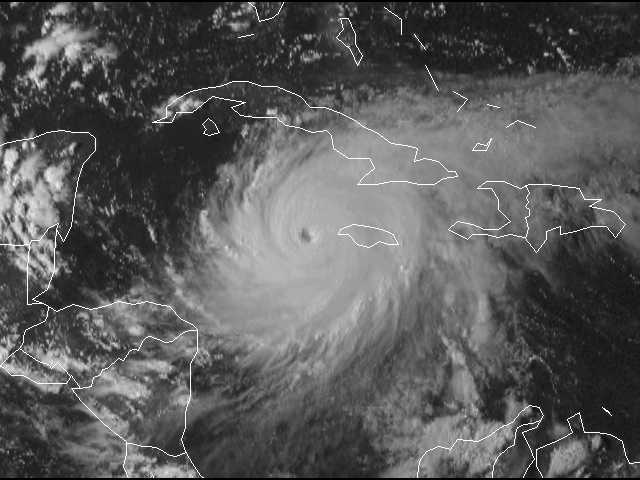 It had been a great week in Orlando. We arrived on Saturday and it was raining really hard and continued to rain all night long. We were staying at the Portofino Bay Hotel at Universal Orlando and they had to close the swimming pools because it was raining so much. Little did we know that the following weekend we would experience rain and a whole lot more.

During the next week, we watched the projected track of Hurricane Charlie but had little worries that it would reach Orlando. Even by Thursday evening, there was no indication that Orlando would have more than rain. The next morning, however, was a different story. We received a message on our phone that the Parks would be closing early that day in preparation for the pending storm. They would open on time but close at 1:00 pm. We were scheduled to check out of our villa at Old Key West that day and were planning on checking into the Embassy Suites nearby for our last evening before returning home on Saturday evening. My sister and her family were sharing our villa with us and they were flying out early Saturday. They were planning on staying at the Hyatt at the Orlando airport. The storm wasn’t scheduled to hit until later in the evening so we went ahead with our plans and checked out.

Our plans that day were to go to the Disney Studios so we went ahead with them. Of the four theme 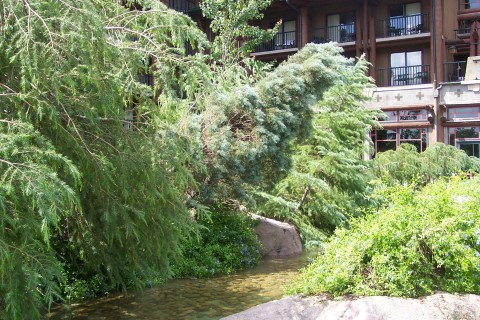 parks only the Animal Kingdom didn’t open on Friday because they wanted to keep the animals safe that day. As we went through the gates of the park we were presented a piece of paper that explained that we were not going to be charged for admission that day although we had to use our admission ticket to enter the park.

All of the attractions at the Studios were open. There were huge crowds there as well. The day was sunny and the sky was blue with calm winds. It was a perfect day to be in the parks. There were many more characters in the park than usual which was nice. As it got closer to the 1:00 closing time the employees started gently letting us know that park was closing. There even was an announcement over the loudspeakers letting us know that we needed to leave the park.

We had a 6:00 pm priority seating at Boma which were didn’t want to miss and since we had 5 hours to kill before that. Having checked out of our room at Old Key West, we had to find someplace to go until dinner. We decided to go to the Wilderness Lodge and have lunch then we would go to the Animal Kingdom Lodge for dinner.

Upon arriving at the Wilderness Lodge the hotel was hopping. We decided to grab a quick lunch at Roaring Forks and then just hang out for the afternoon. It seemed that everyone staying at the Wilderness Lodge also had the same idea. It was standing room only. While we were there the rain started. It was rain like I have never seen before. We finished lunch at close to 3:00 pm since it took us about 90 minutes to order, get and eat our food. At that point, the lobby of the hotel was full of families trying to entertain each other. They also had characters in the lobby to help keep the kids occupied. 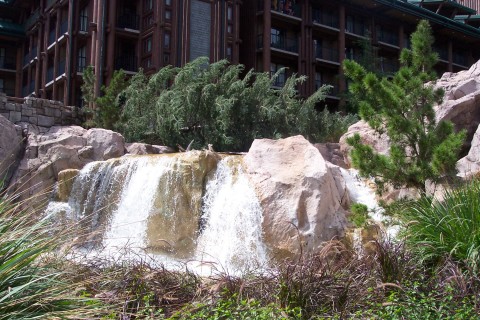 It was also at that point (around 4:00 pm) that my brother-in-law, Shawn, decided to check with the airlines on whether they would be flying out of Orlando airport the next morning. He found out that they were not and the soonest he was able to get on a flight was Sunday. He quickly made the change and then checked at the desk at the Wilderness Lodge to see if they had availability for the next two nights. He was given a room at a full rack rate, no discount.

I helped him get his luggage from the car and our wives and children went up to their room. When we got up there my sister had turned on the TV. Things were looking grim for the Orlando area. A message was sent to the phone in my sister’s room telling them that valet services had been discontinued and if you need your keys you should pick them up from the front desk. The message also informed them that the restaurants and hotel shops would be closing soon.

It was at this point that my wife and I decided that we should go to the Embassy Suites for the night and miss having dinner at Boma (given that it too was closing). I went to the front desk at the Wilderness Lodge and requested my keys. At which point the Cast Member told me that all the roads were closed and I could not leave the hotel. I asked her what she expected me to do since I didn’t have a room at the Lodge. She told me that she could get me a room and quoted me the full rack rate. We made the decision to stay there for the night.

It was at this point that cast members were telling everyone in the lobby to get into their rooms, bring in all patio furniture from the balcony, and stay in the room away from the sliding doors. Shawn and I went and got our luggage from the car and as we were taking it up to our room found out that Roaring Forks had box lunches that they were selling so people could have dinner. Unfortunately, they had just run out so we didn’t get box lunches but while I was getting a room for the night, Shawn had gone into the shop and purchased chips, doughnuts, and other snack-type foods.

We all congregated in one room and tried to keep the kids entertained. My 7-year-old daughter was very concerned. Luckily the resorts had begun broadcasting Disney movies on 3 or 4 different channels so we were able to provide them some entertainment.

With boredom setting in, Shawn and I decided to wander through the halls of the hotel. Most people were in their rooms but there were those who had grabbed pillows and blankets and were having carpet picnics or sleeping in the hallways. When we were in the lobby we could hear debris hitting the roof of the lodge and you could see the trees being blown almost horizontal in the courtyard of the lodge. The wind was tremendously strong and water was coming in through all the large windows in the lobby of the lodge. 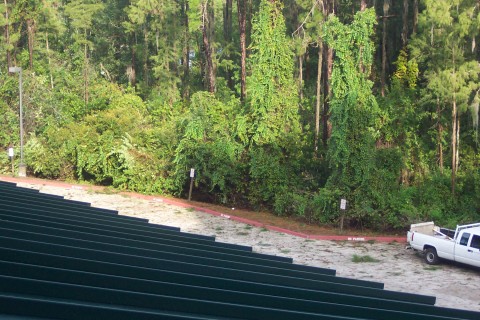 Disney Cast Members were taking flashlights around to all of the rooms in case the power went out and Shawn and I happened to meet a few of these Cast Members in the hallway. As we were talking about the power going out I realized that if it did, we would be locked out of our room because the keys are electronic. So we headed back to Shawn’s room and I got my family and headed to our room.

During the night, at about 11:45 a message was sent to the rooms letting people know that they had opened Whispering Canyon and were serving a dinner buffet there for people who were interested. We missed this call though because we decided to go to sleep at around 10:30 which was after the hurricane had passed through Orlando.

The next morning a message was left on the phones explaining the parks would be open and the operating hours of each park. The parks received very little damage, the worst hit was Disney’s Animal Kingdom and that park would remain closed for at least that day.

We went downstairs and wandered around the grounds of the Wilderness Lodge. There were trees lying on the ground. Tree limbs and branches blanketed everything. It was a sad sight to see.

We left the hotel to go spend the morning at Downtown Disney. The drive-over showed even more damage. Besides seeing downed trees and branches many signs were bent to the ground or ripped apart by the raging winds. However, traffic signals were working on Disney property. No power was out anywhere at Walt Disney World. That was a different story to the rest of the Orlando area. Disney did a great job of preparing for or correcting the damage caused by hurricanes. At Downtown Disney there were many people anxious to share stories of what they did during the hurricane. The cast members were every bit as friendly as they ever are and it appeared that nothing had happened although I am sure that many had experienced a loss of some kind or another.

Through the entire experience, it was amazing to see the great job that Disney did in ensuring guest safety and satisfaction. I tip my hat to the Cast Members that made sure that we all weathered the storm that was hurricane Charlie.

As an aside, I did contact Guest Relations about being charged the full rate for the room when I was told that I couldn’t leave the hotel and they did remedy the situation.

Having lived in Florida for most of my life I have been through many hurricanes and been fascinated with these monsters since I was a young child. Atmospherically they are absolutely gorgeous! For those in their pathways, they can be destructive and deadly. Disney managed to make it through 3 storms this past year with very minor damage. Some blown-down trees, missing roof tiles, and exterior decorations were about the extent of the damage done by all three hurricanes. Our family visited Orlando not long after Jeanne passed through and we were surprised to see how well Disney had survived. Having just come through Hurricane Ivan ourselves, we were expecting to see much more devastation. I took the opportunity while I was there to talk to a few Cast Members who reassured me that Disney sustained very minor damage and lost no animals during all three storms! I was also told that Disney buildings are built to withstand winds of 150 mph and surpass current hurricane codes for the state of Florida.