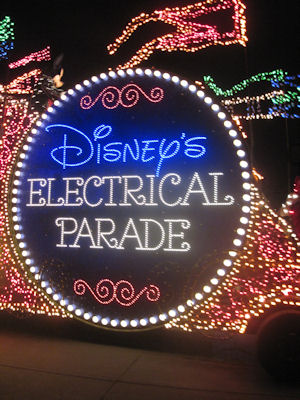 We just returned from a very busy two week trip to Walt Disney World. Originally, the plan was for a short trip, but with the announcement that the Main Street Electrical Parade and the new Summer Nightastic! Fireworks Spectacular would begin on June 6, we decided to extend our trip. We are big Spectromagic! fans and wanted to see the difference between the two.

We arrived at the Magic Kingdom midmorning on June 6. The crowds were a little heavier than they had been the previous week, but we expected that with the returning classic parade and new fireworks show.

Around 7:30 p.m., we decided to find a place in the Castle hub where we could watch both the parade and the fireworks. We were surprised to see that the sidewalks were already crowded with other families trying to get a good view. Though we did have someone in our party who was in an electric scooter, we found the handicap section already full.

After looking around for a few minutes, we found a space behind a family in the hub and took our space to wait. By now it was 8:00 p.m., and we were anticipating the Main Street Electrical Parade. 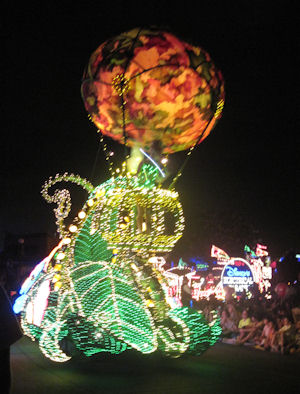 It was extremely hot and humid, so I left to find snacks and drinks. While wandering around trying to find some refreshments, I saw a Disney Media Hospitality Room sign. This was not up earlier in the day, so this let me know that the opening of the parade and fireworks was getting lots of media attention!

The parade began at about 9:10 p.m. The parade was led by Tinker Bell. My children loved seeing her at the start! Following Tink were Minnie, Mickey and Goofy on a train engine float that announced the parade. The Main Street Electrical Parade is based on very classic Disney stories. There was Alice in Wonderland with Alice, the Cheshire Cat, and the caterpillar on several different floats.  Another float grouping had Cinderella at her royal ball. This was one of my favorites as it had many couples dancing under canopies as the parade went by. Also included in this parade was Pete’s Dragon, the Seven Dwarfs with a special focus on Dopey as he drove a cart, Peter Pan and Captain Hook, and a series of floats dedicated to America. The music was upbeat and lively and my children enjoyed listening to it. 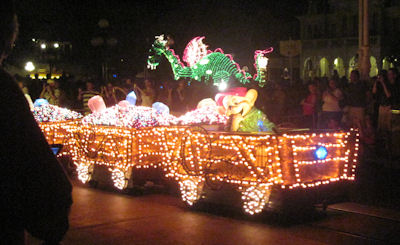 If you would like to see video of the parade, TheMouseForLess member Jud has a great video on YouTube that he had shared with us. Click here to see the video. 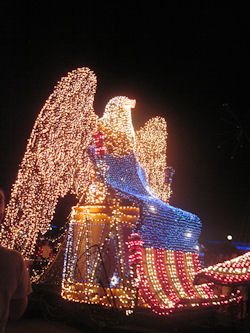 Next we waited for the Summer Nightastic! Fireworks Spectacular. The crowds had not changed much since the parade except to get larger. I had to go to the Baby Care Center before the fireworks and I was not sure that I was going to be able to get back through the crowds to the rest of my party. I did however, and found that the crowds and the heat had worsened.

Finally it was time for the fireworks. My children, who don’t normally enjoy fireworks, did like these. They were bright and colorful. The castle changed colors and the story of good versus evil was told. At one point the castle had a skull and crossbones on it! About in the middle of the show, Tinker Bell flies from the top of the castle, all lit up. The fireworks seemed to be coming from each side and from behind the castle and were timed to the music. The voice of the Fairy Godmother could be heard along with that of a villain. It was exciting and easy to follow the simple story.

After the fireworks, the crowd thinned out and we rode a few rides before heading to the main gate. The crowd for the second showing of the parade was lighter than the first one, by a lot.

Our group was split on the Main Street Electrical Parade. This parade does not have nearly as many characters walking freely around and it stays more with the traditional stories. It is definitely worth seeing and it is a magnificent spectacular of lights and sounds. 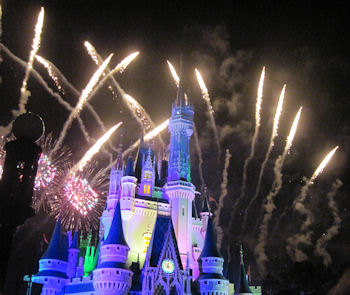 I am definitely glad that we changed our plans and stayed to view the new summer entertainment at the Magic Kingdom. It was a wonderful way to close our trip. If the plans were to leave these summer shows in place year round, I would plan on seeing them every visit.