THE FORCE has returned to Disney’s Hollywood Studios! Star Wars Weekends are back on Fridays, Saturdays, and Sundays through June 15th, and you are welcome to JOIN THE REBELLION! 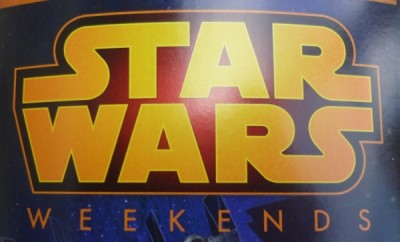 IF you can get past these guys, that is…;) 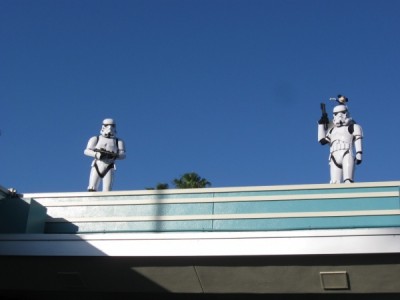 You can find a definitive guide to Star Wars Weekends here on the Mouse For Less site, with everything you need to know from character greetings, to shows and entertainment, to scheduled Star Wars celebrity appearances and autograph sessions (as well as how you can use FastPass+ to enhance your time). It’s a terrific tool for planning your Star Wars Weekends experience.

I’d like to share some of my photos and highlights from Star Wars Weekends, as I try to capture why it’s my favorite time of year at Disney’s Hollywood Studios.

Star Wars: Episode IV – A New Hope was my first big screen movie when I was a kid, and that began a lifelong love of the Star Wars film series. Leave it to Disney to bring these films and characters to life in a truly unforgettable way… For a Star Wars AND Disney fan, Star Wars Weekends are an unforgettable experience! 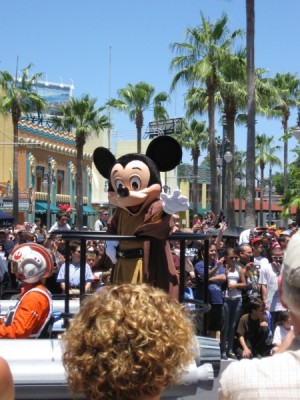 I visited Star Wars Weekends on opening day this year (Friday, May 16). The energy is palpable as you encounter Star Wars characters around the Star Tours attraction and Streets of America sections. Many have designated greeting spots where you can wait in line for a traditional meet and greet: 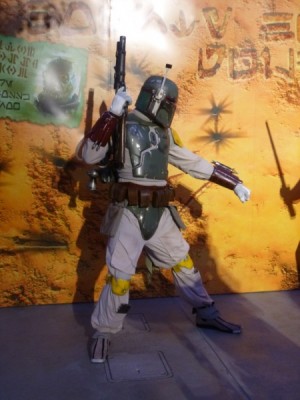 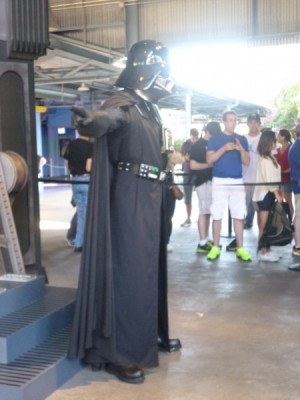 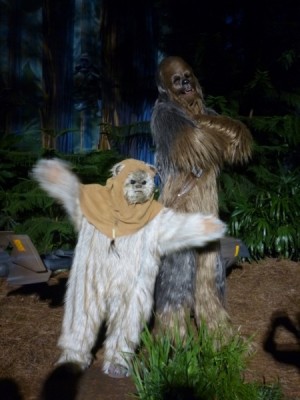 But you can also catch some characters just wandering around… or patrolling the scene, in the case of Stormtroopers! 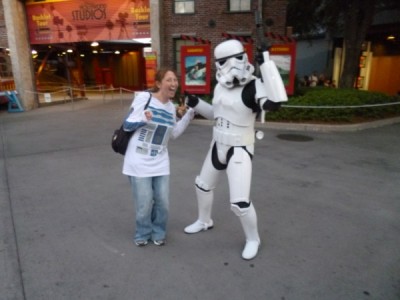 You can also greet Disney Characters dressed as Star Wars characters! Jedi Mickey and Princess Leia Minnie (as well as Stormtrooper Donald and Darth Goofy) have a new home this year, inside of Darth’s Mall. 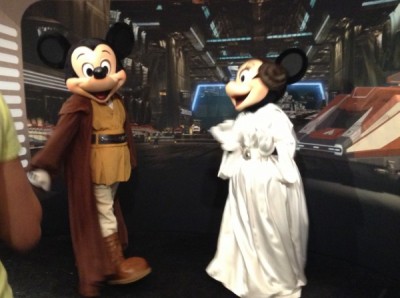 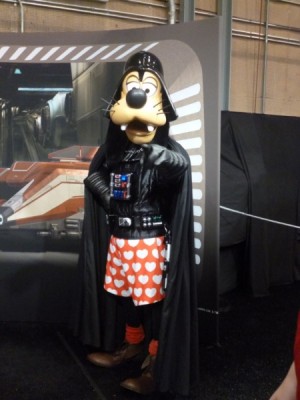 What is Darth’s Mall? It’s a must-visit merchandise spot for every Star Wars fan (or anyone who knows a Star Wars fan and would like to nab them the coolest gifts this side of the Galaxy). 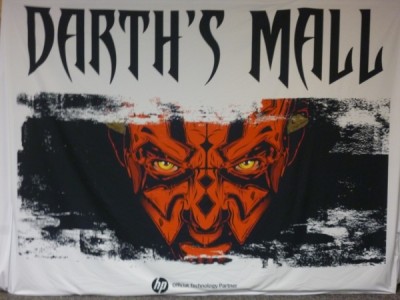 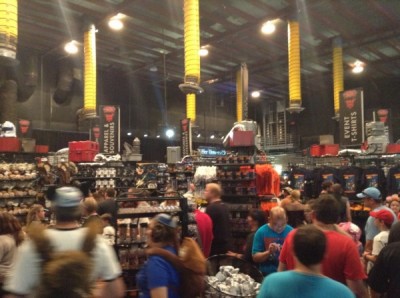 Located on Pixar Place this year, this huge temporary indoor mall has everything from toys for the kiddos… 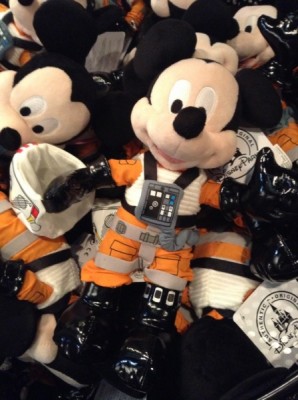 … to memorabilia for the serious collector (including D-Tech Me, where fans can have a personalized Star Wars figurine made into their likeness! 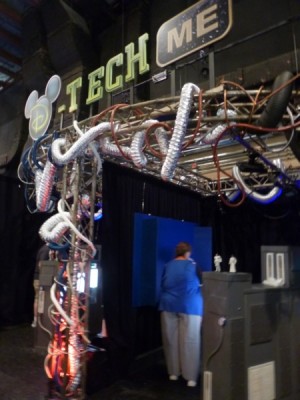 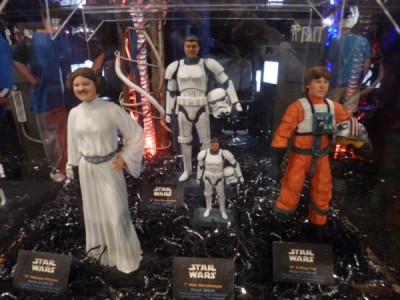 Some of my favorite merchandise comes from the “Her Universe” line designed by Ashley Eckstein (voice of Ashoka Tano in The Clone Wars cartoon series). Ashley was available to sign merchandise for her fans. 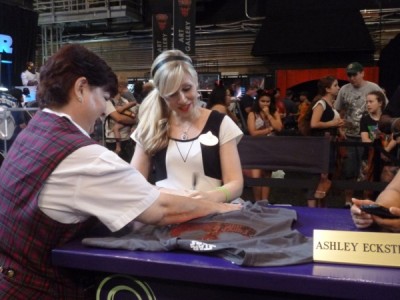 Ashley’s line is specifically for girls and women who want to show off their fangirl side (you can see my R2-D2 shirt in my photo with the Stormtrooper above)! 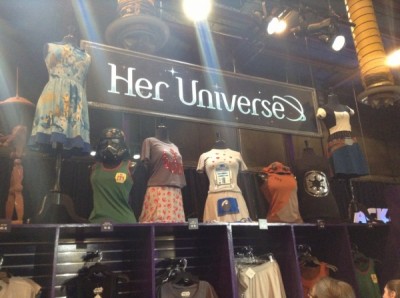 Another must-do for me each year is catching at least one of the celebrity shows. James Arnold Taylor is the voice of Obi-Wan Kenobi in The Clone Wars cartoons, but this voice actor’s repertoire of hundreds of character voices is astounding. 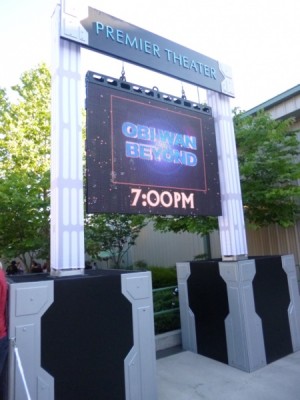 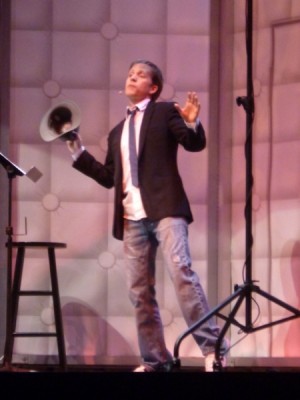 I am more of a Star Wars film fan than I am of the cartoons, but I have made it a priority to catch this show every year — it’s just that good.

The end of the day culminated at the main stage (at the icon Sorcerer Mickey hat) in a huge gathering of characters from both the Rebel Alliance and the Empire. 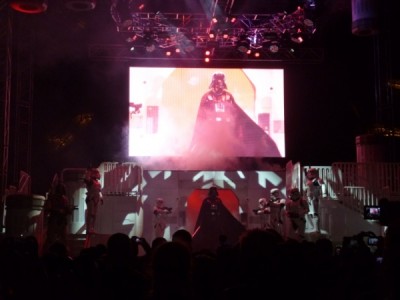 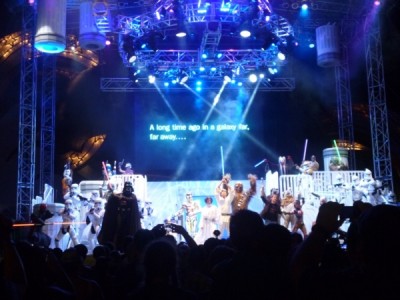 New this year is Symphony of the Stars, a fireworks presentation set to the unforgettable music of Star Wars. Unfortunately, my camera just couldn’t capture the amazing choreographed fireworks… this is one that you HAVE to see for yourself! It’s a wonderful way to cap off your galactic Star Wars adventure. 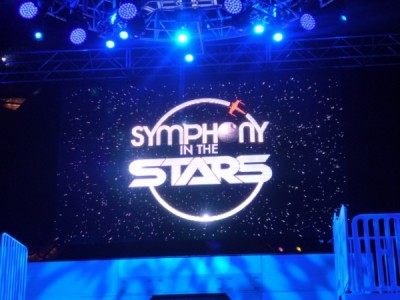 This barely scratches the surface of all Star Wars Weekends has to offer! But you can “tackle it” as methodically or as laid-back as you wish. If you’d just like to stroll and soak up the atmosphere, there is plenty to enjoy. Those who prefer to plan and catch as many parades, shows, character greetings, and experiences as they are able can do that, too. For guests who are not necessarily Star Wars fans, I really think the atmosphere is enough to enjoy, and you never know… you may just walk away a new fan yourself!

May the Force be with You!