When I was three, I refused to wear pants. I would only wear dresses or skirts (or skirts with thick tights, in cold weather) for years of my life.

Although I’ve since been able to wear pants and think of non-Snow White names for pets, I was still very excited to see the exhibit on display in Disney’s California Adventure park, honoring the 70th anniversary of the movie. I didn’t know what to expect, but what we found inside the animation building in the Hollywood Studios area of the park far exceeded my expectations, in content, display, and the above-and-beyond knowledge and friendliness of the Cast Member who talked us through the exhibit. 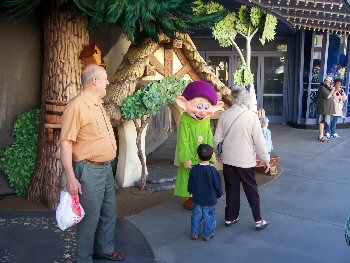 A photo-ready cottage and dwarf outside of the animation building.

The exhibit fills the center lobby inside the animation building, and I was immediately delighted to see stunning stills of sketches and paintings filling the enormous screens all around the ceiling. It was like Snow White in Circle-Vision. What a perfect use of the animation building, too! It was very gratifying to get to see the space filled with images that helped to create the animated film that launched them all. And then we entered into the walled exhibit, and it only got better. 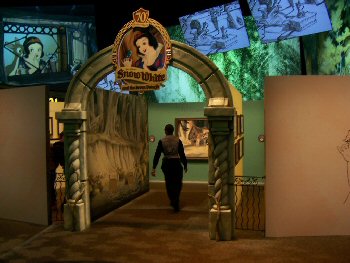 A little bit like venturing into a forest…only not a scary one.

The exhibit’s sections each showcase a different aspect of the movie. I got so excited with all of the production sketches, paintings, and cel reproductions to look at that I got a little lost in the maze of twisting walls filled with art, so although these sections might not be the “right” order in which to view the exhibit, the sections are: Forest Friends, Dwarfs’ Cottage, Flight through the Forest, How Animation Works, The Queen’s Evil Plan, The Story Behind Snow White and the Seven Dwarfs, “I’m Wishing,” Magic Mirror on the Wall, The Prince, The Queen’s Disguise, The Poison Apple, The Dwarfs Arrive Home, Heigh-ho, Building a Bed (with removed scenes), and Happily Ever After. 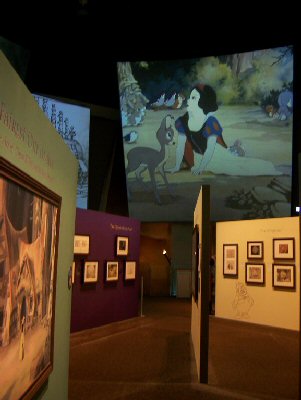 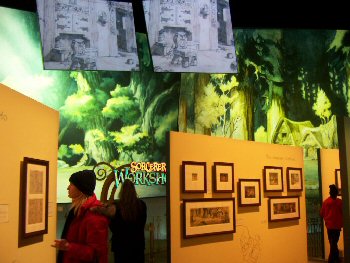 We had the exhibit to ourselves for a while, but it soon filled up with guests admiring the art.

I loved the concept sketches the most. The sketches for scenes that never came to be were fascinating: the dwarfs building a bed, which I’d heard of before, but also a scene involving a pumpkin that looked pretty funny. Another sketch showed an early version of Snow White with blonde hair. (Of course, now I can see that Snow White’s skin probably looks much more stunning in contrast with her dark hair, but boy, would I have loved to see a blonde Snow White when I was a blonde-haired kid!) 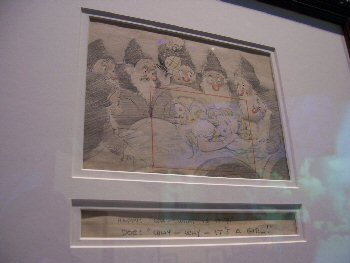 A version of a young—and blonde!—Snow White. 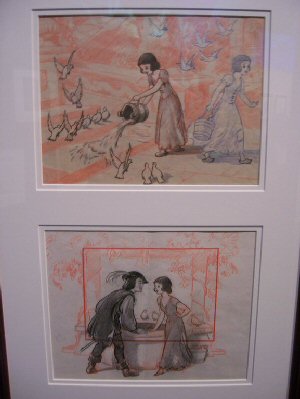 From the description card at the event: “A Scullery Maid Meets Her Prince — These early drawings show the young princess working in rags as a scullery maid. The red lines on the story sketch suggest the camera’s view.”

My favorite drawing looked like a panoramic image of the forest scene early in the movie, with Snow White sitting on the ground surrounded by curious animals (the “forest friends”). I was able to study the amazing light and texture in the sketch, all done in graphite, up close, and then take a picture of it to remember — not something easily done in most museums. The exhibit provides a great and rare opportunity for everyone to appreciate the artistry and skill behind this movie, at just inches away.

Forest friends in black and white.

Everyone’s got their favorite characters from Snow White, but some of mine have always been the miscellaneous, adorable little birds that pop up throughout the movie. And there are plenty of cute little birds featured in the exhibit, too! 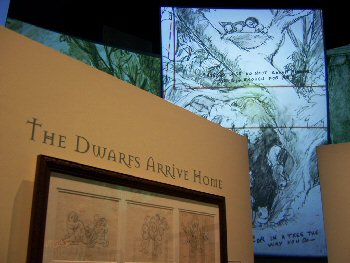 Birds on the big screen! 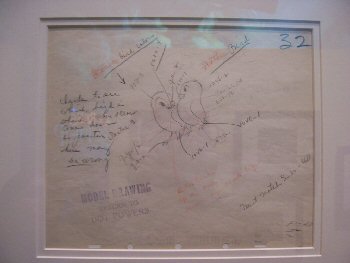 This model drawing of two birds is just too cute — and the notes about the paint colors for “mother bird” and “father bird” (and to “be sure to check” on which one is which) make it all the more fascinating to examine.

The pieces on display and the stunning colors and design of the exhibit were enough to please me, but a Cast Member who was staffing the exhibit really made my day. Jason took an interest in my interest in the drawings, and walked me through the entire exhibit again, letting me babble on about the drawings I liked best, and offering his own favorites (he was partial to an image created by Wolfgang Ryderman of the face-slave in the Mirror).

Jason also gave me some tidbits about the exhibit, like the fact that Eric Larson and Ward Kimball are the only two of the Nine Old Men who have work showcased in the event. He said how he thought the exhibit was great because of the stories it inspired guests to tell him — including a former Ink & Paint girl who was able to identify her friend’s work on display! 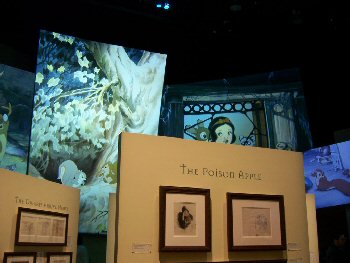 The animation building is the perfect host for the exhibit.

Before he left us to go and greet other guests, Jason pointed out work by Maurice Noble, who created backgrounds in Sleeping Beauty and consulted on the watercolor backgrounds in Lilo and Stitch. He told us that Noble reportedly said about Lilo and Stich‘s watercolor work that “Walt would be proud.”

I’d certainly echo that thought regarding this exhibit. It made me happy to see the true classic of animation get some special recognition in a Disney park. It made me even more pleased to meet such an enthusiastic Cast Member showing everyone around, parents and kids alike, and introducing a new generation to the film that started all the rest. 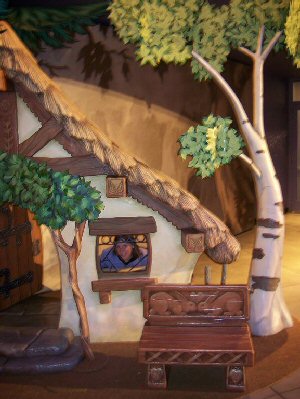 I might be pregnant with my own kid now, but I still snuck into the cottage!