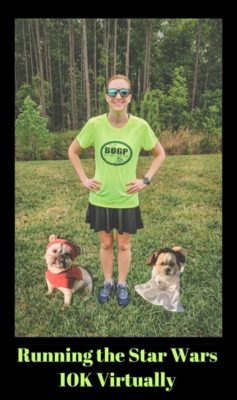 We have all gotten used to cancelled events over the past few months. It’s become the norm and even though we are all somewhat used to it, it can still be disheartening. I’ve been missing Disney, specifically running at Disney, a lot these days, so I have started looking for ways to keep the magic alive at home.

When I heard the Star Wars Rival Run races had been cancelled, I was not surprised, but I was still a little bit sad. Runners are a stubborn bunch though, and we don’t give up or walk away from things easily. So, when I heard the news, I decided there was only one thing to do…run the distance anyway!

I may not have been able to be at Walt Disney World, but there was nothing stopping me from completing the 6.2 miles I signed up to run. So, on April 18th, as scheduled, that’s exactly what I did. I ran the Star Wars Rival Run 10K virtually!

If you have ever participated in a runDisney event, you know that these races come with a very early wake up call. One advantage to running virtually was that I did not have to get up at 2:30 am. That may have been the best silver lining of this whole experience!

I still got up relatively early for a Saturday though, so that I could run before the Florida heat set in. I got up, got dressed, and was at the “start line” before 7 am. This time, there was no travel time to the park involved. No standing around in a corral for an hour and a half. No risk of forgetting where I parked. I enjoyed these little perks.

The start of every runDisney race is accompanied by a plethora of port-a-potties. With anywhere between 15,000-25,000 runners, the port-a-potty area gets crowded pretty quickly, so imagine my surprise when I found one with no line! I opted not to take advantage of the situation though, since my house was only 10 feet away.

Instead, I started my running watch and I was off! This was the strangest runDisney event ever because I did not pass a single runner. Wow! I did, however, pass a woman walking her dog in leggings that resembled Spaceship Earth and took that as a good sign.

The first few miles went by easily and quickly. There were no character stops, but I found a few photo opportunities along the way to spice up my run.

As I approached the final mile, it was starting to warm up and the humidity was off the charts. I was ready to be done. I saw the sun streaming through the clouds and imagined the gospel choir that sometimes performs close to the finish line, welcoming me home.

At the end of each runDisney race, runners receive a snack box with various snacks to help rebuild energy. Luckily, I had saved some cheese dip from my marathon snack box to celebrate the end of this run.

There are also photo ops at the end of the race, so I took my “finisher” photo with Baby Yoda. Also, through the magic of Photoshop, I got a photo with two very special dogs named Ewok and Princess Leia. (I guess I should call her General Leia now though, right?)

I also have a tradition of eating a delicious brunch after every race I run. Why break tradition even though this was a virtual race? To celebrate, I chose a local restaurant and ordered take out. We ate in the car instead of relaxing in a Walt Disney World restaurant, but hey, an untraditional race deserves an untraditional brunch!

I know it looks as though I ran this race alone, but I didn’t. Yes, it’s true that I did not run with anyone physically beside me, but I was far from alone. Runners from all over made the same choice that I did and ran the distance they had signed up for. Seeing their pictures and hearing the stories of their virtual runs was incredibly inspiring.

This is why I runDisney. The excitement, the characters, the medals, the fun, and the brunch are wonderful, but mostly I love the people. I love that we don’t let anything stand in the way of achieving the goals we set for ourselves. I love that we do this despite the obstacles. Most of all, I love that we do it together, no matter the circumstances.