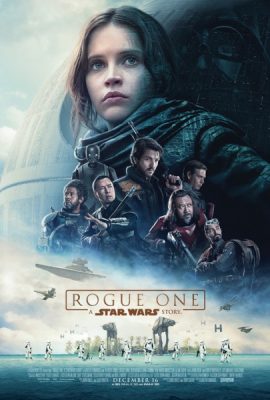 official movie poster for Rogue One: A Star Wars Story

My love affair with Star Wars began just a year after my love affair with Disney theme parks. There I was, a 7 year old girl in the movie theaters with my family, about to see this new film that just came out from that guy who directed American Graffiti.

It’s not an exaggeration to say my life hasn’t been the same since. I grew up with Star Wars. I waited those excruciatingly painful three years between films. As an adult, I watched the prequels in the Hollywood Chinese Theater. My husband and I had a date to see The Force Awakens. There was not a question that we would see Rogue One on opening day.

I wasn’t sure how I’d feel about this film. First of all, we all (unless we’ve been living under a rock since 1976) know how it’s going to end. Spoiler alert: the Alliance gets those Death Star plans.

But it’s all about the how, the who, and, I think most importantly, the why.

It’s telling that this film is NOT called Star Wars: Rogue One. It’s called Rogue One: A Star Wars Story. It’s a subtle reminder that we are not seeing an epic chapter in the Skywalker saga. Instead, we meet a collection of characters – none of them with a famous name, all of them desperate and struggling to find hope in a very bleak situation.

I must admit, when I saw the words “A long time ago, in a galaxy far, far away….” come up on the screen, and then it was NOT followed by the enormous words “STAR WARS,” I gasped, and I’m pretty sure I wasn’t the only one in the theater to do so. But it was a smart move on the part of the film makers. They wanted us to know from the get go that this was going to be different. There was no blaring Luke Skywalker theme. No opening crawl. Instead, without any preamble, we are hurtled directly into the action.

There should be no surprise that the visuals are impeccable. Pretty much every scene could be freeze framed and looked at like a beautiful painting. The original Star Wars changed the face of special effects, and this Star Wars story does not disappoint.

But a special effect without a story is a pretty boring thing, and this story is compelling. When the film begins, the Alliance is in a very low, hopeless place. The news that the Empire is building a weapon capable of destroying an entire planet is devastating, and many in the Alliance want to simply flee, to rendezvous somewhere safe and regroup later.

You’ve probably heard the line “Rebellions are built on hope” in the film’s trailer, and that is a recurring theme in this film. Watching characters who have lost so much and fear so much more come together to do what seems impossible, with nothing more than hope on their side, is truly touching.

In my humble opinion, this film is what the prequels should have been, and I’m going to be as bold to say that it’s a better film than The Force Awakens. This story of struggle, sacrifice and hope is one that we desperately need right now.