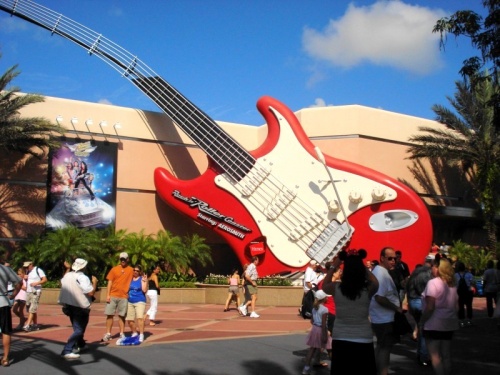 There are so many diverse rides and attractions to be found at any and all of the Disney theme parks. I think locking in an attraction to a person/movie can be a really good thing. Having an attraction dedicated to Walt Disney makes sense. Having rides themed after beloved Disney movies also makes sense. Having a “land” themed after a movie like Harry Potter (I know it’s Universal Studios, but it still kind of applies) will eventually lose some of its shine – especially since the series is just about done – but will continue to enchant because the series was so amazing. But to me, personally, I thought basing a ride on a group was a risky endeavor.

When Rock N Roller Coaster was first introduced, it seemed like a great idea because Aerosmith was in its prime. They were back, bigger than ever and clearly proving that they could stand the test of time. Now? Not so much. I think that the group itself has imploded a little bit and with Steven Tyler doing his own thing, there isn’t really an Aerosmith left, per se.

Maybe I’m looking at it the wrong way but there are very few bands/artists that should be immortalized this way. The Beatles, Elvis, Led Zeppelin to name a few. I never thought of Aerosmith as fitting in to that level of “honor”. Although nowadays it seems like almost anyone can get in to the Rock N Roll Hall of Fame except those who are truly deserving.

But I digress. I think Aerosmith has some great music, don’t get me wrong. The ride itself is spectacular and tons of fun but at what point to we say “Okay, that was great but we need to refresh here a little”? What band/group do you think would make a good replacement for such an amazing ride that would keep with the energy that Aerosmith brought to the attraction in the first place?

I know music is a matter of preference but are there any groups out there who could stand the test of time and carry such an attraction? Another fact that I found interesting was for a family theme park, was Aerosmith the right choice for that? I know that they cleaned up their act and the music played embraces that clean and sober phase of their career but I think a true fan of theirs remembers their wild times with a little more fondness.

Having said that, if we were going for a more “family friendly” band, who is there? I don’t think Disney could go with their own “artists” because I know this forty-something mom would not want to ride on a Hannah Montana roller coaster or a Selena Gomez one. If I had to choose a band today I think I would vote for one like Bon Jovi, but that’s just me.

So Disney fans, if you could rehab/refresh Rock N Roller Coaster, who would you like to see in the studio? Who would you race all over L.A. to go and see? What soundtrack would you love to listen to while on your limo ride?