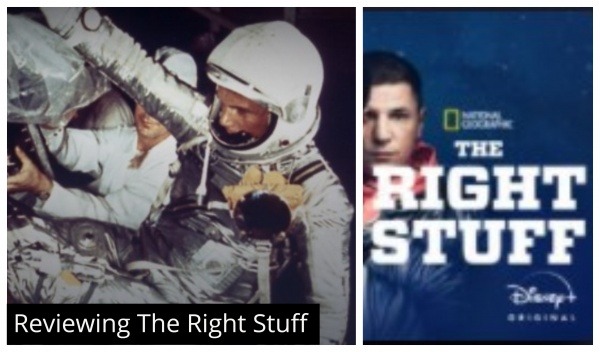 First, there is “The Right Stuff”, a dramatized series based on the book of the same name by Tom Wolfe.  The first season of the series follows the test pilots turned astronauts.  It begins with their selection to the first manned American space flight.

The story unfolds in eight episodes ranging from 45 to 53 minutes.  Each of the episodes is fast paced.  Each intertwines the stories of the astronauts, their families, and the newly formed NASA personnel.  The drama series gives a glimpse into how the astronauts dealt not only with the press, government officials, but what the dynamics were like between the seven men.

Interestingly, the story of the astronauts’ relationships with their families is heavily featured.  The wives are shown as having their own interests and hobbies beyond just taking care of the children.  Unlike what would be shown by the media, there is plenty of screen time focused on what is not perfect between husbands and wives.

“The Real Right Stuff” is a 90 minute documentary of the story of the Mercury 7 astronauts.  This National Geographic documentary makes use of archived footage and audio- some of it never before heard or seen.

The documentary focus on the astronauts with their wives taking a back seat in this telling of their story.  Spoiler: the wives are mostly featured in scenes where they are at home watching on TV as their husbands are being shot into space.  Shortly after the launces and landing, they would be questioned by the news media about what they thought about what their husbands were doing.

Which should I watch first?

While both of these features are excellent viewing, I recommend viewing the drama before the documentary.  Why?  The dramatized version of events will draw you in, hold your interest, and balance the story of the astronauts, their families, and the NASA personnel.  In comparison, the documentary helps put into perspective the events of the dramatized version.  For instance, the $500,000 Life Magazine deal doesn’t sound like a huge amount of money.  Until put in perspective by the documentary that each family was paid approximately three times their annual salary for three years for the Life Magazine exclusive access.

Ultimately, it does not matter which of these features you chose to watch first.  Just watch them both as soon as you can.  Both of these features are worth your time and will be of interest to anyone curious about the history of the United States Space Program.

Oh, but you better watch them both soon.  “The Right Stuff” has been renewed for a second season, so more space drama is headed our way.