Where can you get a behind-the-scenes studio tour of movie and TV productions and take in several experiences in one ride? At Universal Studios Hollywood, of course!

All Aboard the Studio Tour

There is a queue, but, fear not—trams leave continuously, and each tram carries 192 people. The trams take guests past working soundstages and parts of the back lot. It is unlikely that you will run into any celebrities, but John Badham, the director who gave us WarGames, the 1979 version of Dracula, and Saturday Night Fever, once worked as a tour guide, so you never know. 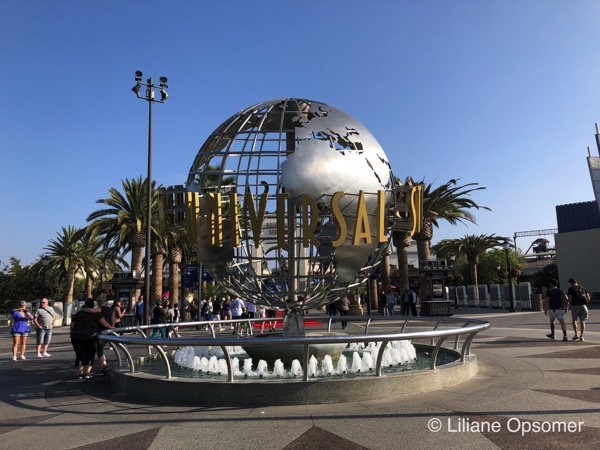 The tram passes through various street scenes, some looking like old Western towns, others dubbed “general purpose sets” for town scenes. Even Walt Disney Studios has used the back lot for movies such as 101 Dalmatians and the Pirates of the Caribbean series. The Wisteria Lane neighborhood is home to the Desperate Housewives. 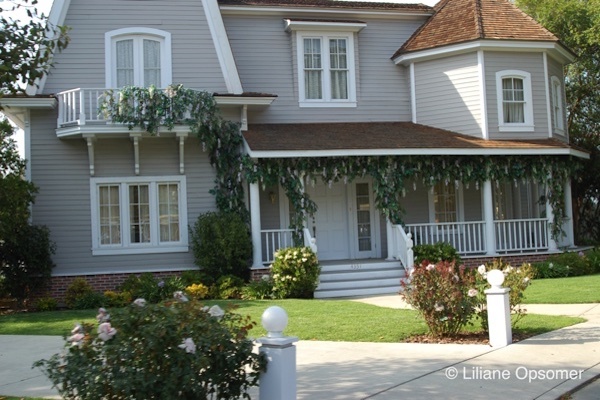 Other sets include the house used by Hitchcock for Psycho and Dr. Seuss’s How The Grinch Stole Christmas. 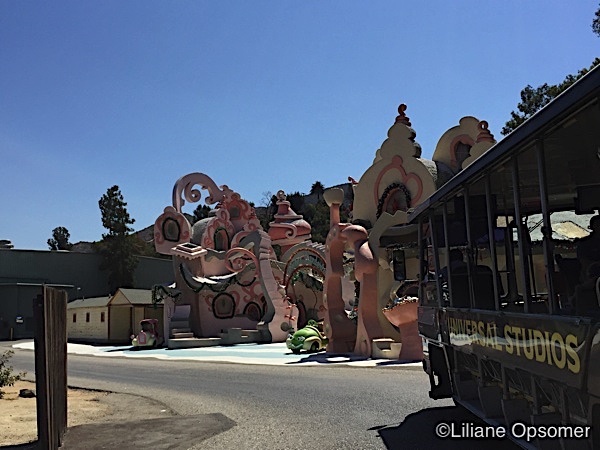 War of the Worlds: One Costly Movie Set

Steven Spielberg’s 2005 War of the Worlds set is the most dramatic one that the tram passes, and it did cost a small fortune. While the movie was shot on several locations, the airliner crash scene was shot at the Universal Studios lot in Hollywood. Spielberg purchased and transported a Boeing 747 to the lot, where it was chopped apart into massive pieces to create the wreckage scene, with damaged houses built around it. The price tag for the airliner was $50,000; transportation costs were an additional $2 million. Spielberg filmed on set for three days; the scene appears in the movie for a few minutes. 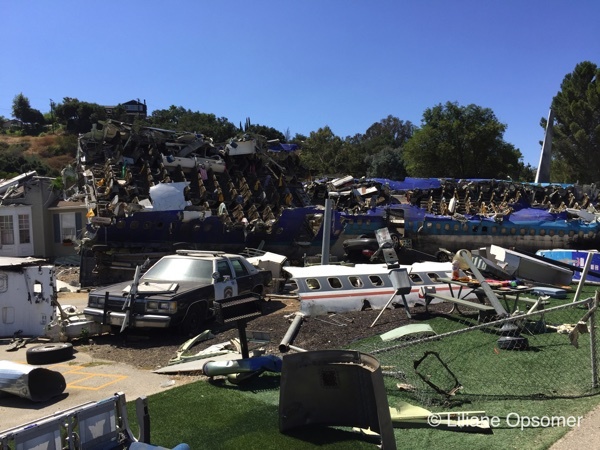 The tram also passes an area featuring all kinds of vehicles used in movies and TV shows. The cars on display change at times, but currently you can see the Ford Mustang built for Knight Rider, Biff’s Ford from the Back to the Future movies, the M2 Bradley IFV from Transformers, and several cars from the Flintstones movie, just to name a few.

About Earthquakes, Flash Floods, and Monsters of the Land and Sea

Special effects are on full display when the tram enters a soundstage simulating an 8.3 earthquake inside the San Francisco BART station. Sparks fly, gasoline tanks explode, and water floods the station in an impressive show of movie magic. 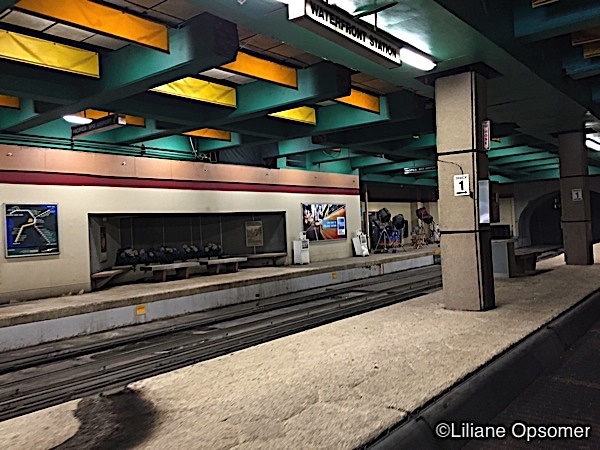 That same magic is also at work at the Old Mexico buildings, where torrential rain leads to a flash flood. Old Mexico has been used in movies such as Three Amigos and is the site for Tortuga in Pirates of the Caribbean. 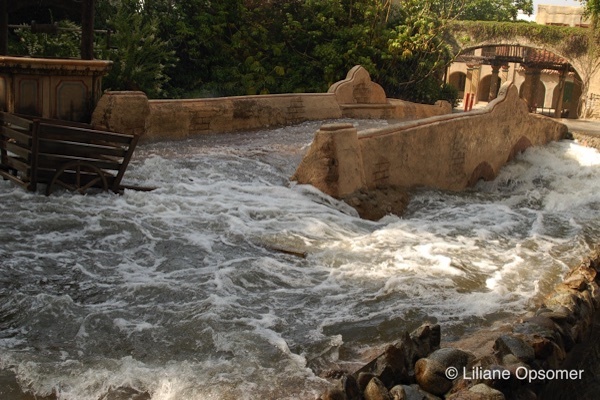 The tram passes several bungalows used by famous directors throughout the years. Bungalow 5195 is marked by a silhouette of Alfred Hitchcock who had his personal office here.

The set of his movie Psycho, including the Bates Motel and Psycho house, is one stop where the tram does not linger long, as a knife-wielding actor, portraying Norman Bates, is on the lookout for another victim. 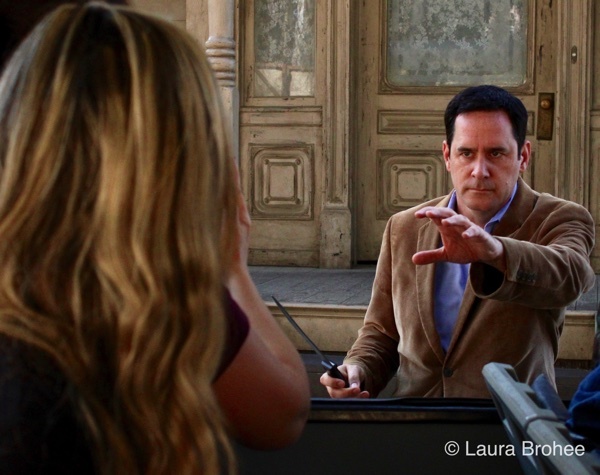 Talking about victims, Bruce, the shark from Steven Spielberg’s Jaws, looms in the harbor of Amity. The New England seaside village is a reproduction of the Martha’s Vineyard location where Jaws was filmed. 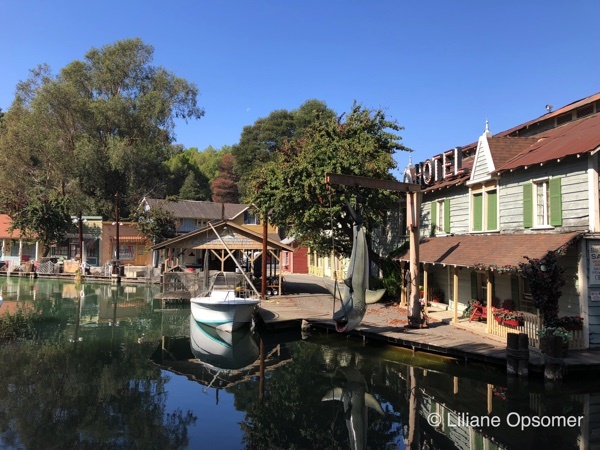 The animatronic shark seems to move effortlessly in its current setting, but Bruce gave Spielberg lots of headaches while shooting on location, as he did not do well in salt water. In addition to having a penchant for sinking to the bottom of the sea, Bruce also needed extensive, daily cleaning. 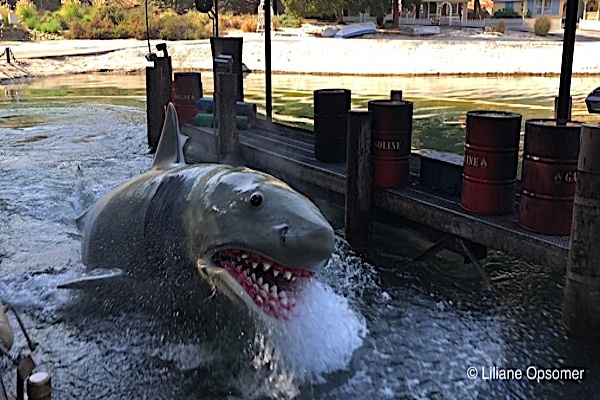 The King is Back and Reigns on Skull Island

Peter Jackson’s award-winning remake of King Kong shines inside a soundstage turned into Skull Island. Here, dinosaurs wage a ferocious battle, even attacking the tram. Special effects of the King Kong: 360 3-D attraction are fabulous. The tram drives on a motion-based platform—tilting, raising up, and dropping down—all the while, riders are exposed to air blasts, water, the jungle’s mist, and even Kong’s breath. The ride replaced King Kong Encounter, an attraction destroyed by a massive fire in June 2008. 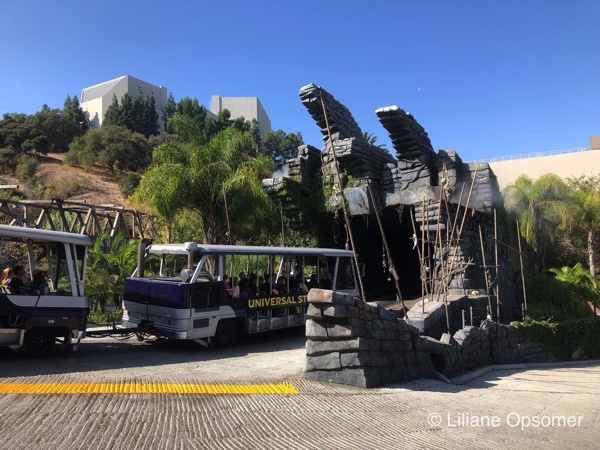 The Studio Tour ends in an 809-feet-long building featuring the world’s longest 3D projection installation. Here, the riders of the tram come upon a racer party in full swing. Agent Novak puts an end to the fun, and soon guests are in the middle of a high-speed car chase. 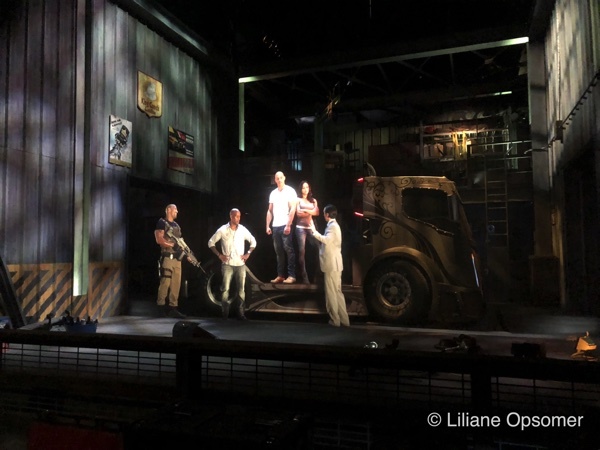 The entire Studio Tour takes about 50 minutes and is an absolute must for any visitors to Universal Studios Hollywood.

Have you visited Universal Studios Hollywood for the Studio Tour. Let us know about your experience in the comments, or on Facebook or Twitter!

Want to visit the California themed destinations? Contact The Magic for Less Travel for more information and a free, no-obligation quote.