Disney+ has allowed Disney fans to explore or rediscover hours of entertainment from throughout the company’s history. Probably my favorite portion of original content, as I’ve said before, is all the behind the scenes access we have been given. And the newest entry in the line of engaging behind-the-scenes content from Disney+ is the new series “Prop Culture”.

Prop Culture is centered around movie prop collector Dan Lanigan, and his contacts at the Walt Disney Archives, taking a deep dive into a series of films from the perspective of notable props and costumes. Because I love behind the scenes stuff anyway, and also work with theater craft artisans who make props, sets, and costumes, this show was immediately a huge draw for me.

Even with all of that, the actual show was actually even better than I was hoping. Each episode focuses on one film, with exploration of a few important props, costume pieces, or other parts of the production process, but then reunites some of the original actors and creators with those objects. As such, each episode has its own dramatic arc of emotion and discovery, and you find yourself interested and invested in the process, even if you aren’t familiar with or a fan of the film they are focusing on.

But with the selection of films, there is bound to be something for everyone, starting with the classic Mary Poppins, but including more niche favorites like Nightmare Before Christmas and Tron, before finishing with a film close to my heart, The Muppet Movie. 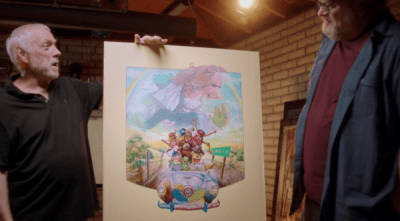 In fact, one of the last scenes in the Muppet Movie episode seems like it was tailor made to be 100% my thing, with the combination of history, behind the-scenes magic, music, and The Muppets.

If you are looking to try something a little different, learn part of Disney history, or just discover a show you can binge in a day, Prop Culture should definitely be near the top of your list.