Like many five-year-olds, my grandson Sebastian dreams of life as a pirate. He went out as Cap’n Jack last Halloween, got a chance to learn pirate fighting techniques during our last visit to the Magic Kingdom and has even suggested “Captain Jack Sparrow” as the perfect name for the new baby his mother is expecting. So signing him up for the Pirate Adventure during our trip in April seemed almost to be a requirement. 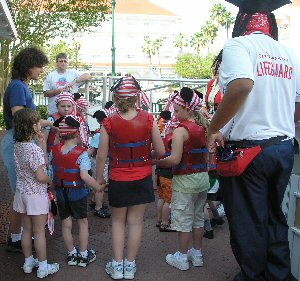 We arrived at the Grand Floridian about 9:00 a.m. and Sebastian quickly spotted the boat with the Jolly Roger flag flying from its stern. We were greeted at the dock by two cast members/pirates who helped the assembled children (ages 4 to 10 – both boys and girls) put on their red-and-white pirate bandanas (topped with Mouse Ears) and get fitted with life jackets. After a brief discussion, they marched single file down the dock and onto the boat.

(These were very non-judgmental pirates. Sebastian had been given a Peter Pan costume the day before and was determined to wear it during his Pirate Adventure. We mentioned that Peter didn’t always get along with pirates, but he still wanted to wear it. The cast members did say they’d never had Peter Pan on one of these cruises before but thought his ability to fly might come in useful.) 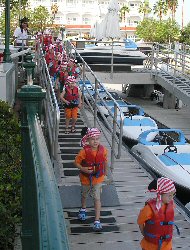 Sebastian’s father (my son Matthew) and I went back to our cabin at Fort Wilderness while they were gone, got the rest of the family and returned by boat. As our ferry crossed from Fort Wilderness to the Magic Kingdom, we passed the pirate’s boat, and all the young pirates rushed to the side and yelled “Arrrrggh!!” at us. We were definitely intimidated.
I suspect that some pirate oaths prevented the children from telling us exactly what happened during their two-hour long adventure, but here’s what Sebastian told us afterwards: The boat sailed to several beaches (connected to the resorts around the lake) where they found pieces of the treasure map. When they had all the treasure map pieces, they found the treasure chest, but then they had to find the key to open the treasure chest. (I won’t give away the secret of where the key was found, but Sebastian was impressed.) Then one of the pirate leaders tried to take all the treasure for herself, so she was kicked off the boat. (I’m not sure if she actually had to walk the plank.) However, she apologized and agreed to share so they took her back. 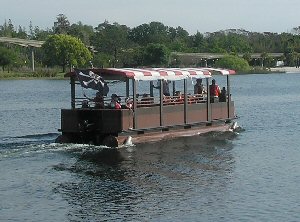 Once opened, the treasure chest contained bags of loot for each child. They also had a simple lunch – apparently, pirates are fond of peanut butter and jam sandwiches. No rum was served. In between the searching for treasure, they learned pirate words and pirate songs.

When the boat docked back at the Grand Floridian, the children were kept on the boat and released one at a time only when the parent showed ID. (We appreciated the attention to security here – letting them all run off the boat together could have been a problem if a parent hadn’t made it back to the dock in time.)

Another Cast member gave Sebastian’s little sister, Callista, a pirate bandana as well after seeing her look covetously at her brother’s. That made her day, even though she was too young for the Adventure. Sebastian, perhaps having learned his lesson from the pirate who was kicked off the boat for being too greedy, even shared his loot with her. Hmm… not what you’d expect to learn on a Pirate Adventure! He did have a wonderful time and we highly recommend it. 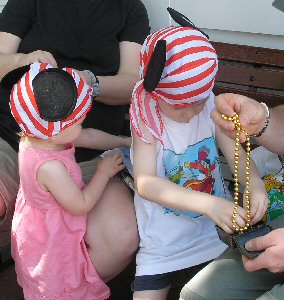